What would it be like to spend a year with Governor John Hickenlooper? In 5280’s August issue, executive editor Maximillian Potter lets you experience that for yourself. We sat down to talk with him about embedding, confidentiality agreements, and how he really feels about the Gov.

I wanted to do this story because John Hickenlooper had been a remarkably successful and popular mayor. Mayor Hickenlooper’s trademark was his ability to stay above the political fray and not politicize things. Two of his overarching principles are: There is no margin in making enemies, and any problem can be solved if you can find the alignment of self-interest. My approach to him was: “Hey, you pulled it off pretty well being mayor, and lets see if your ‘Kumbaya,’ no margin by making enemies, and alignment of self interest work as governor.”

5280: Why do you think Hickenlooper agreed to let you embed with his team?

One of Hickenlooper’s main priorities as governor is to restore people’s faith in government. Ultimately, I think he would tell anyone who asked, why he let me in the way he let me in was because he truly believed that having somebody come in, who didn’t have a dog in the fight, could be a window through which those who chose to look could see pretty clearly how he and his administration operated, and, really, how the state legislature operates. I think he believed that would help restore faith in government.

5280: How did reporting this piece compare to work you’ve done in the past?

Well, I would never do this over again. It was so much more work than I anticipated. I was with him, more or less, from April 1, 2011, until February or March 2012. For the first four months, I was with him pretty much every day during the first legislative session.

When he ran for office, as he said in one of his speeches, he traveled the state and sat down at a lot of kitchen tables, which, as he put it, is where parents sit together and figure out the finances for the home. And it’s where children do their homework, and it’s where they gather for their meals, and it’s where you can hear the heartbeat of Colorado. After he was elected governor, his conference table became the state’s kitchen table. Every piece of business, every decision, formal or otherwise, every favor, every ask—it all flows right over that conference table. So in the first five or six months, I spent most of my time sitting at that conference table just watching anywhere from six to 10 meetings a day.

The metaphor I used for a while was that I was running around in a butterfly field trying to catch all the butterflies, because when I got to the end to write, I didn’t know which butterflies were going to matter. I didn’t know which issues were going to be the issues. So I spent an inordinate amount of time gathering an extraordinary amount of information and trying to catch butterflies all over the field. The challenge became then, how do I just funnel all of that down? What are the stories that matter? What are the moments that matter?

5280: Did you have a confidentiality agreement with Hickenlooper and his team?

Yes. There were three big ground rules. One, there were times when they would be discussing personnel issues of their staff, but they just asked me to be a human being and respectful that there may be moments when—and this is a hypothetical—when someone would have to be fired or someone would have to be reprimanded and they didn’t want that person to be humiliated. (And, no issue like this came up during reporting that was even remotely related to the story.)

And then the third biggie was that stuff was embargoed. The deal was that anything I would learn in that first year would be embargoed for at least six months into his second year.

Also, I didn’t see a need to shine a spotlight on the Governor’s wife and young son, and at the outset I agreed they would not be a part of the story. The very few times his wife was around the Governor’s chamber, that would have been in play for the story if it was germane. She was just hardly ever around.

5280: So you had all this inside information as to what was happening in Colorado and you couldn’t talk about it?

I think its clear in the piece that I think John Hickenlooper is pretty much the best governor we could hope to have, or that any state could hope to have. It’s awfully nice to feel that way about a public official, particularly after seeing pretty much everything. And we also had a lot of off-the-record conversations. We would do briefings and catch up over a beer. He would let his hair down and we would talk. And he would say to his staff: “There are not any secrets that this guy doesn’t know, so don’t try to tiptoe around anything.” He would speak pretty candidly. I saw him at moments of exhilaration and at moments of absolute exasperation and frustration. The big question will be if he can continue to be that person. Really, though, the question can only be answered by the reader. 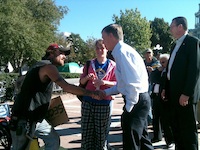 5280: This was a long reporting process. Was it hard to keep that access and trust you earned in the beginning throughout the entire process?

5280: Did you ever feel like they were trying to manipulate you or use you to a certain end?

I think they were trying to use me the entire time. Yeah, that was part of the relentless chess game that was going on in my head the entire time. He is absolutely one of the most shrewd, strategic, political people on the planet. And he thinks incredibly well on his feet. He can see six or seven moves down the chess table before I can. Every single moment that I was with him, I was always cognizant of the fact that he could have been or was viewing me as a tool in his toolbox. I just had to be vigilant.

Let’s not forget the editing thing, too. Yeah, you should be interviewing my wife. Like I said, I wouldn’t do this again. Certainly not for a magazine piece. When I embarked on this, I didn’t have a book deal. Now, I am reporting and writing a book. Midway through my time with the governor, I started going to France for two or three weeks, every so often, for this book project. Even then I would stay in email contact with these guys and follow the news. But no, it wasn’t a 9-5. Hopefully, it was worth it for the people who read this story.

5280: So, now that you’ve finished the story, how do you feel about the Governor?

Most of stories that I cover don’t leave you feeling so great about the state of the universe. This one did leave me feeling optimistic and hopeful. It restored my personal confidence in government. I think Hickenlooper, in particular, has a way of bending over backward and giving the benefit of the doubt to people. There’s a phrase that he uses all the time, its cliché but he’s always appealing to our “better angels.” I think that kind of aspirational politicking, that aspirational strategy, works for him. I’m a pretty cynical cat, and this left me feeling pretty good about where we are. And I think that the voters of Colorado should feel good about where they are. And I think that really puts a lot of pressure on the Governor.

—Images courtesy of Maximillian Potter. From top: 1.) Hickenlooper en route to Aspen in July, 2011 to attend an economic conference. 2.) A snapshot of Potter’s home office and some of the notes he compiled over the year he spent with the Governor and his team. 3.) The Governor meets with Occupy Denver protestors in October, 2011.