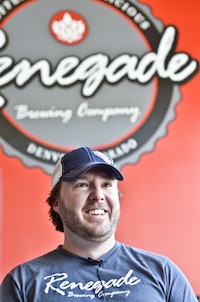 Just more than a year ago, Renegade Brewing Company opened in the Art District on Santa Fe. Any naysayers, who wondered if beer and art could co-exist, were wrong. When we sat down with brewer Brian O’Connell on June 26—exactly one year after Renegade opened its doors—the tiny brewery was canning its first batch of four-packs, waiting for new barrels, and obsessing about cocoa nibs.

O’Connell: “We’ve been moving fast and furious. We have new 30-barrel tanks coming in a few weeks. We’ll be double brewing into those to keep up with our can production. We’re going as fast as we can to keep up.”

O’Connell: “My goal when I opened Renegade was to become a packing brewery, to go into distribution. We’ve partnered with Mobile Canning. They bring down the supplies from Longmont and help us can for the day. Then they leave us with the cans to sell. 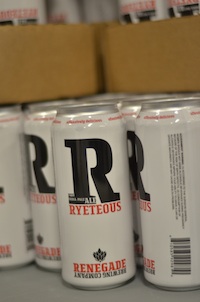 O’Connell: “People in Colorado like to do outdoors stuff and you can’t take glass to those places. Once you’re done with your can, you can stomp on it and put it in your backpack.”

O’Connell: “The choice was that you get a full pint out of that. A restaurant can pour a customer a full pint. It is a better deal. It is just like you would get in our tasting room. A little extra is good.”

O’Connell: “It is our flagship beer. From a business sense, from day one, it has been our best seller. The emotion behind it: It is the beer closest to my heart. I developed it in my backyard, as I did for most of our beers. I did that recipe over and over to develop a good rye IPA. I am proud of it. I want it to represent our company, for it to be our consumer’s first taste of the company.”

5280: Where are the cans distributed?

O’Connell: “Our distribution is small: A few liquor stores (Mondo Vino, Marczyk, Libations), a few bars and restaurants (Denver Bicycle Cafe, Rooster & Moon). We have 10 or 11 places that this first run will go. But that’s it. We’re pretty much sold out. We are looking for more tanks to get to a wider audience.”

O’Connell: “At home, the first batch was right around Christmastime in 2005. My wife bought me a homebrew kit for Christmas. She knew I liked craft beers. My first few batches were really bad. Then I bought some books, and bought a better kit, and went to clubs, and kept buying bigger and better equipment until it got me here. I keep buying more!”

O’Connell: “I was a researcher. I worked for a small private consulting firm in Denver and then for University of Colorado, and then I left CU to come here. I love it. For me, when you’re a statistician you spend your day in a cubicle staring at a computer screen. I like talking to people and doing hands-on stuff. That’s what a brewery is all about. I spend the day filling my kegs, and by the end of the day my tasting room is full and I get to talk to a bunch of different people.

5280: You’re distributing now, but you are also well-known as a neighborhood place, right?

O’Connell: “I wrote in my business plan that first we would be a neighborhood brewery and second a distribution/packing brewery. I found a niche here. We have regulars from this neighborhood. It is the right time for us to move into distribution. Our tasting room is full. It does really well. It is a good way for us to grow.”

5280: You’re in the heart of the Art District on Santa Fe, which is known for its First Fridays gallery tours. Do you do anything special for “First Fridays?”

O’Connell: “We don’t. We open our doors and we can’t fit another person in here. We actually had customers recommend we take out the furniture on First Fridays because we are that busy. It is a great night for us. We don’t really need to do anything extra. We get new faces and see them come back.”

5280: What’s your favorite ingredient to brew with?

O’Connell: “Hops. I love hops. You can tell from my beer list. I do hoppy beers. I’ve done a few beers with cocoa nibs recently. I did a beer with peanut butter cups. I did one with peppermint patties. I like to try out new things.”

5280: What should people come in and order right now?

O’Connell: “I have a new beer that is a release for July. …It’s called “Banana Split,” an imperial chocolate Hefeweizen. You get banana from the yeast. I put cocoa nibs in that, chocolate malt, and some vanilla too. Vanilla, chocolate, and banana all in a beer.

5280: Besides Renegade, where’s your favorite place to drink in Colorad0?

O’Connell: “You name it. Every brewery has something I like. …Breckenridge, my neighbor, makes an awesome Imperial Pils, and they make an awesome Imperial IPA. I love to go there. Great Divide makes my favorite barley wine. I love Yeti. Strange makes a great Farmhouse. Name a brewery and I’ll name a beer I love there.

O’Connell: “Sours are going to become more and more popular. The regular barrel-aged beers will continue to be popular. Saisons are trending. But who knows. I don’t try to concern myself with my trends. There are other places to go to have Saisons, but I’m not making them. I am doing what I want to make. I’m making stuff other people aren’t making. If I’m being genuine and authentic people want to see what I’m doing.”

To learn more about Renegade’s canning line, watch this video. Check out our beer review of Ryeteous Rye here.