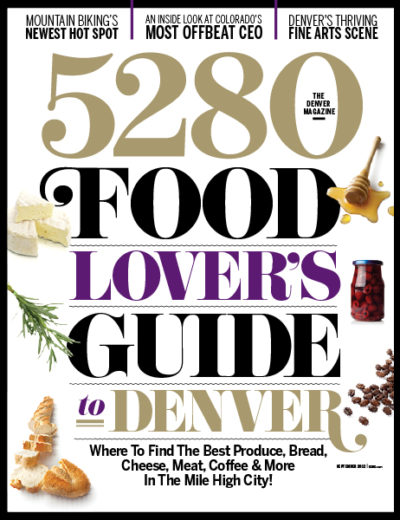 Optical illusions. That’s the best way to describe Amanda Gordon Dunn’s work. Her sculptures appear to be hard, plastic pieces, but they’re actually made of cloth that yields to the softest touch. Her animal “paintings” look straightforward, but they’re actually multilayered pieces created using pencils, pens, markers, and paint. “I’m trying to trick the viewer’s eye,” the 29-year-old says. “I love that it fools people.”

The Denver native is best known for her stretch work: plastic-coated nylon that she pulls over handmade metal sculptures and then covers with resin and paint. It’s a method she invented after spending years restoring metal and welding—and that she’s used to build a new genre of contemporary art. The result is wall art that feels alive.

This work is a far cry from that of the four-year-old Dunn who made a finger painting of a whale knocking over a ship. Her range of abilities, from resin work to drawing to sewing, comes through in the diversity of her pieces. She has a collection of children’s book–like animal drawings that explore color; her recent resin-coated paintings were inspired by surfboard culture of the ’70s; and she’s covered wood with vintage wallpaper and then attached animal heads. Each piece reflects her lighthearted perspective and her muses: old science-fiction movies, muscle cars, pop culture. Says Dunn: “Art has been really the only thing I’ve ever done that makes me feel like me.”

Husband and wife Monica and Tyler Aiello are a study in opposites. In a small garage behind their Highland house, 41-year-old Monica crafts conceptual landscapes: layers of paint, ink, yarn, and tissue paper that mimic the geologic processes on planets and moons. After studying NASA images and talking to scientists, Monica hand-dyes fibers, splatters paint, and drips ink to show the timeline of evolution on one of Jupiter’s moons. “I’m not just trying to say, ‘Here’s an image; let me paint that landscape,’?” she says. “It’s ‘How is that landscape formed, and what techniques can I develop to emulate or interpret that geologic process?’ ”

Tyler’s work takes a different shape. He welds, molds, and colors metal to show primarily the microcosmic aspects of our world: seeds, water structures, other universal formations. Every inch of his 2,700-square-foot workshop behind Sports Authority Field at Mile High is covered with tools, massive shelves, and works in progress. Tyler’s laborious method involves creating molds out of Styrofoam, coating them in plastic, wrapping the metal around—connecting hundreds of circles together—before having to cut it all off the mold and put it back together again. “I’m a builder,” he says. “I consider myself mostly a maker of things.”

Although the couple work separately, their pieces are best appreciated in concert: A broad image emerges from the repetitive shapes that abound in our universe, familiar but seen from an entirely new perspective. “The arts and sciences,” Monica says, “are a married entity.”

Like many people his age, 28-year-old Xi Zhang spends a lot of time on social media sites. Except he’s not updating his status: Zhang is collecting fodder for his paintings.

A blend of cultures—Zhang was born in China and moved to the United States with his family when he was 19—Zhang has long been interested in dualities: virtual versus real, East versus West, old versus new. His trippy paintings merge lifelike drawings of real people with abstract shapes and colors. And in exploring a very modern concept—social media—Zhang intentionally uses paint, one of art’s oldest mediums. “We are sharing ourselves on this social network platform,” he says. “This virtual space almost becomes a physical space. People have a psychedelic experience.”

Zhang scours social media sites to find pictures he can use as a template and often takes photographs himself while he’s out exploring. Sitting on a chair in his one-room workspace near West Eighth Avenue and Inca Street, Zhang pushes his shoulder-length black hair behind his ear, centers his glasses, and looks toward his inspiration photo, which is taped to the wall next to an empty canvas. An iPad sits off to the side on a stool. As he works, bits of his Chinese background emerge, like a symbolic patch that was given to top students when he was in elementary school. Even with the flamboyant colors, viewers can’t help but be drawn to the eyes in Zhang’s work. The eye, Zhang says, “symbolizes direct communication, identity, and soul” and represents the fact that we each see the world through our own lens. As colors merge and fade, creating a break in the subject’s true self and virtual self, the eyes follow you, begging you to see what they see.

Step into the Denver Art Museum’s Fuse Box Gallery: An oversize black cube dominates the sharply angled room. Brown lines swirl around the exterior, a topographical map of the contested Middle East—though you won’t know that yet. Recognizable but elusive sounds play overhead—you won’t know what they are, either, until you ask and discover they’re bits of religious hymns, buzzing bees, breaking surf, and other common noises. Walk around the cube to find a door. Through it, mirrors show your reflection in fragments, and images on video monitors shift based on your movements.

This is Laleh Mehran’s Men of God, Men of Nature (on view through February 17, 2013). The daughter of Iranian scientists, Mehran, 44, fled with her family to the United States during the country’s cultural revolution when she was 10. It’s that history that influences her video and installation work. “I’m interested in the core beliefs, philosophies, and ideologies that make us who we are, and make cultures what they are,” Mehran says. “They are one of the most powerful ways of understanding our world.”

Which explains why Men of God resembles the Kaaba, Islam’s most sacred site: a granite structure in Mecca toward which Muslims turn five times a day to pray. But to Mehran, a full-time professor at the University of Denver, her pieces are more than just structures. They include a performance element in which she involves audiences in ideological conversations. It’s a lot for a woman who, as a preteen, stopped speaking for a whole year because she was embarrassed by her accent. Now, she simply speaks through her work, grand spaces that are simultaneously inclusive and divisive but always reflect contemporary realities. “There’s something about a space, even if you can’t really put it into words or understand it,” she says. “There’s something about it that makes you go, ‘This feels good. I’m comfortable here.’?”

When he was in kindergarten, Carlos Fresquez’s teacher had the students drip yellow, blue, and red paint onto white paper. Then she had the class tilt the sheet and watch what happened. “I lift it up and see these colors swirl. I see yellow and blue coming together and making green right in front of my eyes,” Fresquez says. “To me, this was magic. I thought, I’m going to make this magic forever.”

Like a musician who samples beats from those who came before, Fresquez, who lives in southwest Denver, appropriates imagery into new contexts to comment on modern times. His acrylic paintings explore politics, humor, and his heritage (a Chicano-Native American, Fresquez can trace his family’s roots in the United States back to 1617). So it’s no surprise there’s a juxtaposition of cultures in his pieces: a Campbell’s Soup can of posole in one; George and Jane Jetson embracing with a call-out that reads “¡Sin Fronteras!” (“Without Borders!”) in another.

Working on hanging canvases in the basement of his house, Fresquez builds his works layer by layer, sometimes painting over images and starting fresh. And since that primary-color experiment years ago, Fresquez hasn’t moved far from his original dream: He still slowly builds a piece (sometimes over months) one image at a time until a full picture emerges that captures—and comments on—the beat of his hometown.

There’s something in the haze that settles over Quinn Jacobson’s photos, an imprecise blurriness that imparts a haunting, timeless quality. It’s a characteristic that leaves his subjects looking burdened, as if they’re carrying the disapproving opinions of the world in their eyes. And, often, they are. In exploring themes of otherness and marginalization, the 48-year-old photographer has taken images of sex offenders and prostitutes and others outside the mainstream, and styled images in a manner akin to the way the Nazis photographed prisoners.

Yet even with the unsettling subject matter, beauty emerges. Jacobson’s cameras are large, vintage machines set on wooden tripods with bellows for focusing and shiny brass lenses that date to the American Civil War. These are tools for 1850s photography: daguerreotypes, calotypes, and wet collodion prints. Jacobson has spent more than a decade perfecting the process—from pouring the chemicals (which he imports from Europe) and framing the shot (he ducks under a black sheet to focus the image, which appears upside down in the camera) to the darkroom. “They’re imperfect images,” he says, pointing to fingerprints and pieces of dust that have settled into the corners of the copper plates. Those flaws, layers of meaning, the paradox of what is visible and what is hidden—it’s all the essence of Jacobson’s work. None of us, no matter how good or successful, is flawless. That is the very definition of humanity.