It’s September, which means one thing: Broncos football. I’ve only lived in the Mile High City for six years, but I’ve followed the Broncos all of my life, or long enough to know that the team’s home will always be Mile High Stadium.

For a time, I begrudgingly called it “Invesco.” I tried to use “Sports Authority Field at Mile High,” when the athletic store bought the naming rights last year. But our aging quarterback is inspiring me to go back in time: This season it is Mile High—again.

Should I move one? Will it always be Mile High? Most importantly, where can I get old Mile High gear? (Here’s one spot.) —Image courtesy of Shutterstock

After a weekend trip to Santa Fe, I took the l-o-n-g way home and drove through Rocky Ford, the home of Colorado’s cantaloupes. It’s been a year since a devastating listeria outbreak at one local farm—Jensen Farms—killed more than 30 people. (That farm has since filed for bankruptcy.) The outbreak was isolated, but the resulting blow to the region’s reputation was devastating. 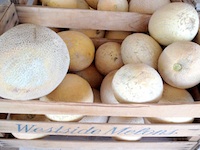 So much so, that nearly everyone—from politicians to farmers and cantaloupe lovers—was worried about the 2012 crop. Like them, I’ve followed the news, including when Gov. John Hickenlooper named August 18 “Rocky Ford Cantaloupe Day.” I’ve read about how local producers have poured money into safety provisions (nearly $1 million). Still, I was curious to see how the town was dealing with its first harvest since the disaster.

I stopped at a produce stand in town and salivated over the bins heaped full of fresh cantaloupes, juicy watermelons, and tomatoes. I even loaded some into the backseat. But I was most impressed with the sellers’ friendly smiles and easy conversation. You’d never know they just faced economic disaster—and moved on.