Sassafras American Eatery
JEFFERSON PARK
In just nine months, Sassafras American Eatery has found a way to make its Jefferson Park space feels as if it’s been there for years. Inside the historic William J. Dunwoody house (built in 1889), time slows ever so slightly—which suits chef Colin Mallet just fine. Born and bred in Louisiana, Mallet cooks generously; the breakfast and lunch menu overflows with towering eggs Benedict, spicy jambalaya, and hot beignets. Sassafras may be down-home, but there’s still finesse: astringent sun-dried tomato vinaigrette cuts the heft of fried green tomatoes, local mushrooms star in the silky gravy, and pickled pepper jam nestles up against crispy fried chicken. The warm service, homey farm tables, and bohemian details all leave a strong impression—and the feeling that you’ll be back before long. 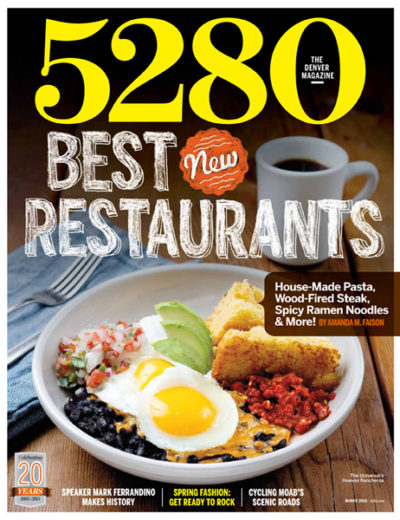 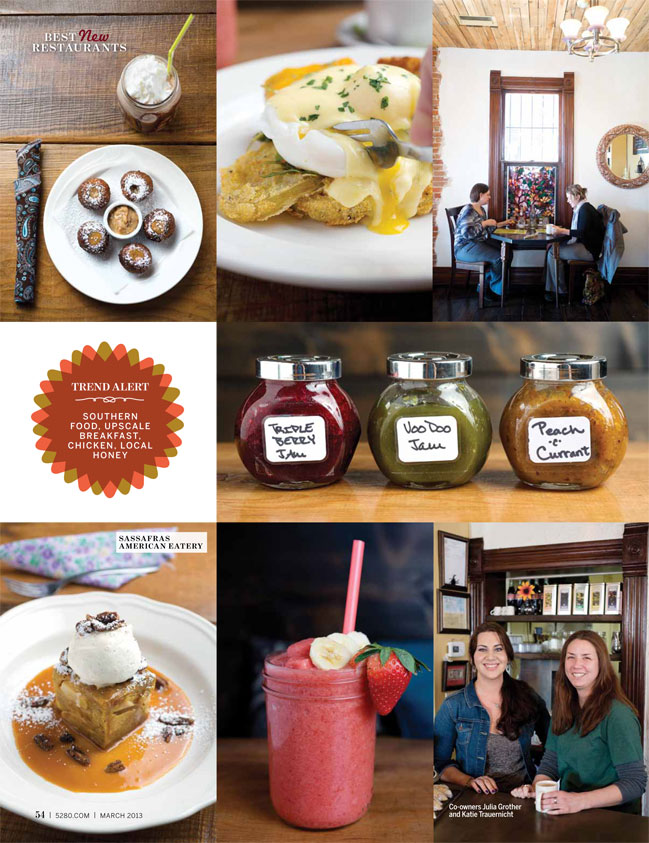 The Populist
NORTH LARIMER
Everyone seems to be trying to claim North Larimer: It’s been called Five Points and RiNo, but this area has its own artisanal identity. And it’s exploding: The Infinite Monkey Theorem recently relocated its winery to 32nd and Larimer streets; Novo Coffee is headquartered nearby; and Our Mutual Friend Malt & Brew, Crema Coffee House, Nooch Vegan Market, and Hutch & Spoon are all within a few blocks. One other newcomer is the Populist, an eclectic and inviting four-month-old restaurant. The unofficial motto—food for the people—seems noncommittal, until you notice that entrées top out at $18, a seven-course tasting menu for two runs about $70, and dishes such as chicken liver mousse and braised beef cheeks anchor the menu. That doesn’t mean that co-owners Jonathan Power and Noah Price (full disclosure: Price happens to be my distant cousin) aren’t pushing the limits—see the huitlacoche agnolotti, an earthy corn fungus stuffed inside delicate pasta. There’s also substance: The menu is written with no descriptions so that you have to interact with your server. And the waitstaff is spectacular—cool, knowledgeable, and as humble as the restaurant itself. 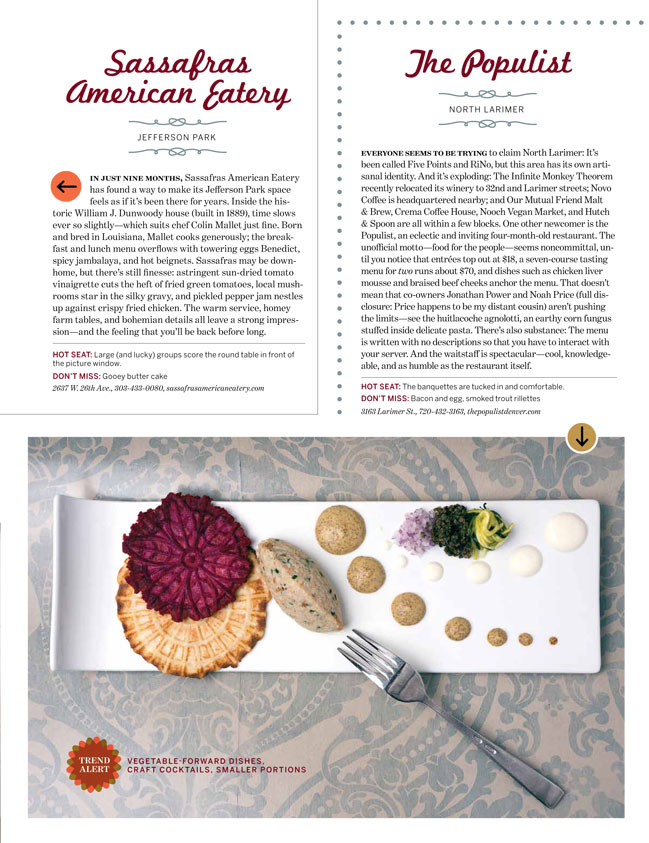 Uncle
LOHI
If you’re going to copy a New York City restaurant as illustrious as David Chang’s Momofuku Noodle Bar, you’d better do a damn good job. That was what Tommy Lee, owner of Uncle in LoHi, set out to do—and he’s largely succeeded. Uncle’s minimalist, inside-a-bento-box decor is a carbon copy of his inspiration; the menu is similar (even the typeface looks the same); and the counter-as-focal-point is dead-on. It would be a little off-putting if the food and ambience weren’t so inviting. Lee has hit on an invigorating combination of loud music, easygoing servers, a come-as-you-are vibe, and creative noodle bowls. You’ll quickly pick favorites when it comes to the bowls—especially the spicy kimchi ramen with a poached egg and the Bibimbap with pickled mushrooms—but don’t pass up starters. Steamed buns stuffed with seared shrimp patties, Sriracha mayo, and shredded romaine are the envy of fish sandwiches everywhere. Order the sugar snap peas tossed in chile-soy sauce, if only for the heady, addictive remains. Scoop the sauce up with your chopsticks and add it to the Bibimbap or steamed buns—or eat it straight. Most exciting: Uncle is making an impact that’s all its own. 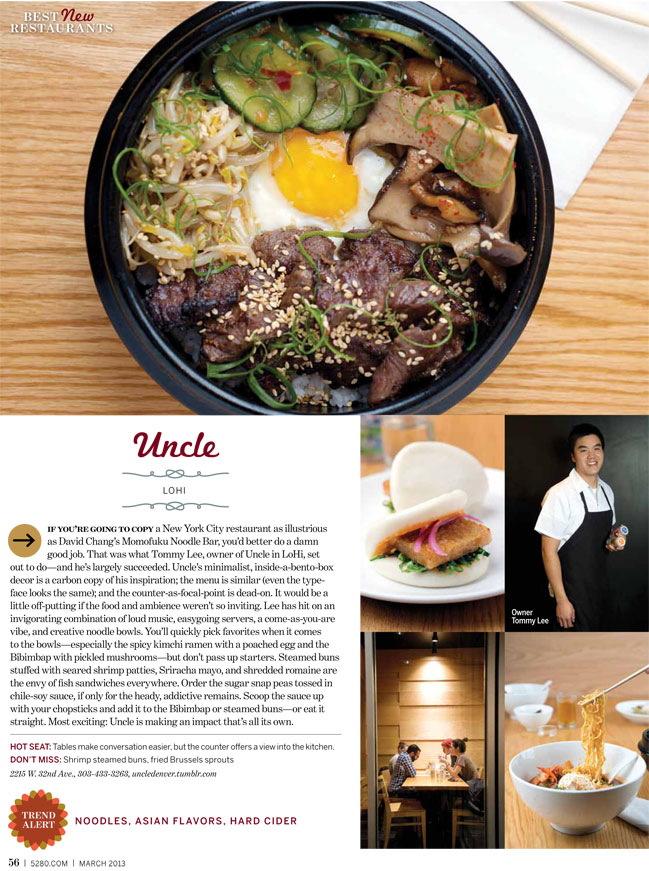 Oak at Fourteenth
BOULDER
It’s difficult to tell the story of Oak at Fourteenth without referencing the fire that destroyed it. In fact, it would be unfair not to include the restaurant’s misfortune, since it defines the new Oak: The nine-month struggle to rebuild and refine resulted in a more focused and mature restaurant. You recognize it in the clean-lined, elegant dining room. You sense it in Bryan Dayton’s progressive cocktail program. You taste it in Steven Redzikowski’s assertive seasonal dishes. It’s confidence manifested on the plate—and it’s persuasive. Many dishes (the kale salad, the meatballs, the shrimp and grits) are holdovers from the original Oak, but now they appear more poised. This concentration of ideas and ingredients works for the new menu items, too. At lunch, the tuna tataki (so often cluttered and sloppy) is a picture of creative restraint: Fried green tomatoes buttress cool slices of yellowfin, slivers of cucumber, and bright, zesty herbs, microgreens, and celery leaves. The dish is exacting in flavor, but it’s approachable and buoyant—all apt descriptions for the restaurant itself.

Hot Seat: The main dining room is shaped like a triangle. Ask for the window seat in the corner farthest from the door.
Don’t Miss: Tender Belly pork loin with bacon-braised sweet potato and figs
1400 Pearl St., Boulder, 303-444-3622, oakatfourteenth.com 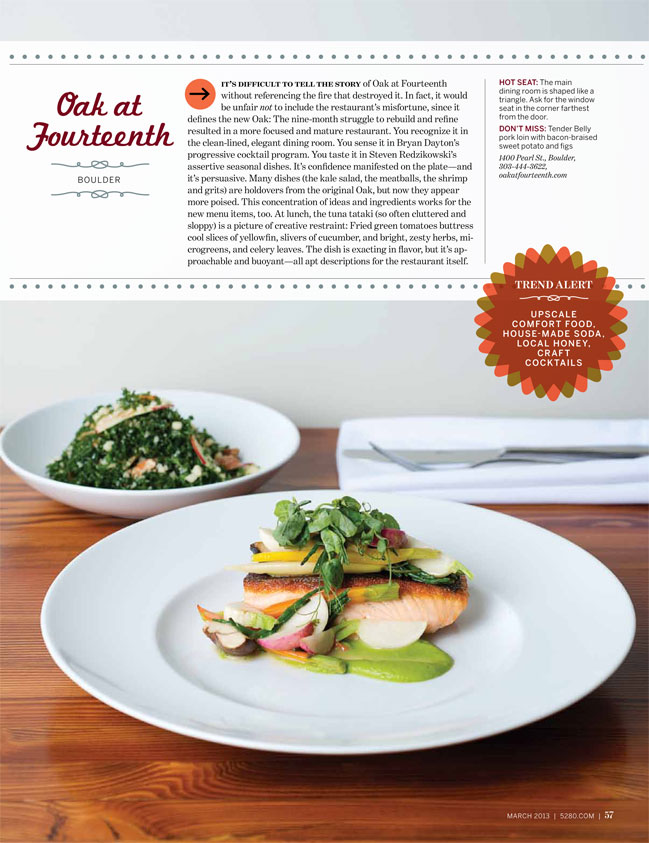 The Universal
SUNNYSIDE
The Universal has taken a Sunnyside location that has been forever awkward (remember Gelman’s Restaurant & Bar, Boston Fish Shack, Stingray Lounge, and Coop de Ville?) and reworked it into a sunlit, whitewashed destination for breakfast and lunch. Textured poured concrete on one wall and a huge American flag on another impart the wholesome feel of modern Americana. That balance of old and new spills over into chef Seth Gray’s enlightened Southern dishes. Order the spectacular grits—either as a side or as a du jour entrée (pork green chile one day, Korean beef barbecue the next). Dig into the scrambles heaped with goodies like savory-sweet chicken-apple sausage, caramelized onions, and chèvre. Try the chicken confit with collard greens and a wedge of cornbread. Food here is big, soul-stirring, and focused. Even the unexpected tempeh banh mi (you read that right) will find fans with its bright, fresh, and satisfying flavors—especially when ordered with a side of those heavenly grits. 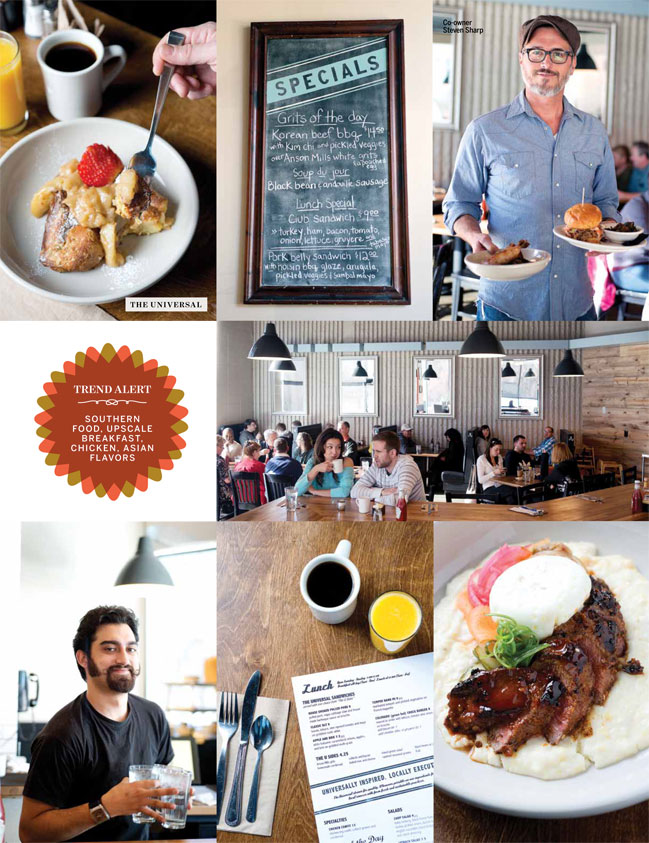 Amerigo Delicatus Restaurant & Market
NORTH LARIMER
It’s a rare spot that welcomes you like a friend and holds your attention so effortlessly you feel like a guest at an intimate dinner party. But that’s the case at Amerigo Delicatus, an Italian eatery perched at the intersection of Broadway and Larimer. Visit during the day, and the space functions as a busy deli with sandwiches and soda. At night, flickering candlelight and alluring house-made pastas transform the 40-seat space into a true restaurant. Chef and co-owner Iain Chisholm’s food is simple, straightforward, and attitude-free: The root salad’s tangle of arugula, shaved fennel, and thin strips of roasted parsnip costs four dollars. The signature linguine, which arrives tossed with house-made Italian sausage and zesty red sauce, is just $13. Portions are small but not skimpy; two adults can make a satisfying dinner out of a couple of appetizers, a salad, and a pasta dish. Amerigo’s easy and unassuming nature is exactly what makes dining here so appealing. 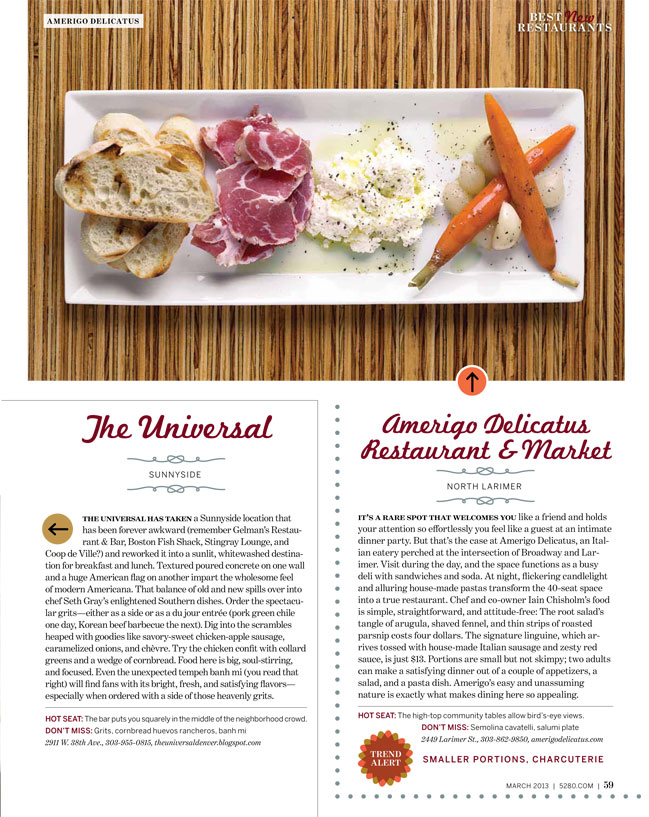 Spuntino
HIGHLAND
Every neighborhood needs a restaurant where you can grab a late lunch on a Tuesday or an impromptu dinner on a Thursday. In the case of Highland, that spot is Spuntino, an Italian-style cafe taken over by chef John Broening and pastry chef Yasmin Lozada-Hissom last March. (If those names sound familiar, it’s because they were instrumental in making nearby Duo Restaurant what it is today.) The menu—which makes extensive use of local ingredients—is substantial, especially given the size of the place. Lunch is comprised of excellent, well-crafted sandwiches (don’t miss the Sabroso with roasted sweet potato, goat cheese, caramelized onions, and sprouts), salads, and a pasta. Dinner translates into vegetable-focused, seasonal dishes composed of house-made pastas and judicious amounts of rich meats. It’s all about balance at Spuntino, and the resulting food tastes wholesome, sincere, and special. That sensibility will soon extend to the space as well—Spuntino is reworking the awkward seating and applying for a full liquor license. With the revamp, Spuntino’s mission of everday dining will truly come into focus. 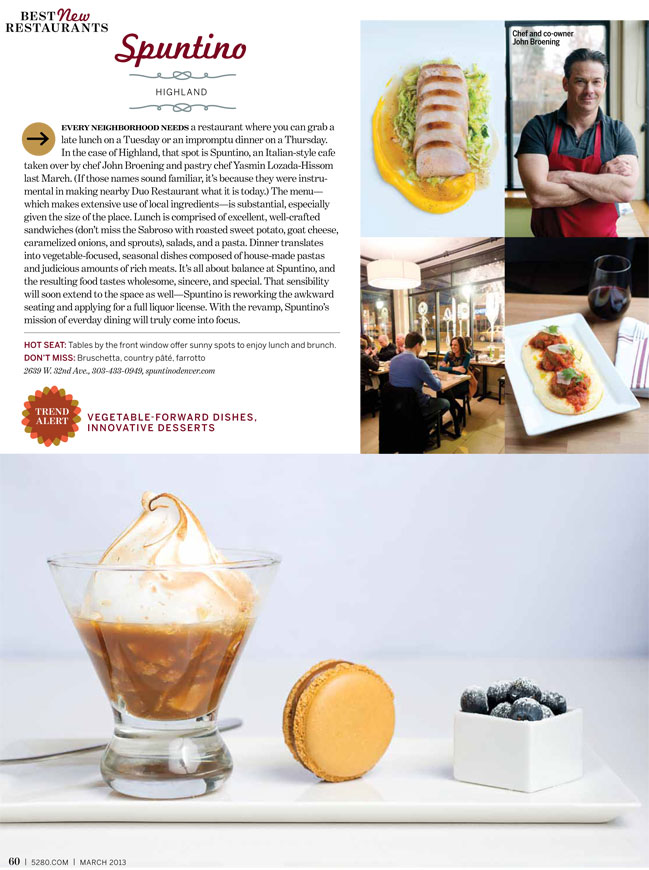 The Squeaky Bean
LODO
When a neighborhood restaurant relocates to a new part of town, an identity crisis is almost certain. But when the Squeaky Bean traded its Highland digs for a space in LoDo, it did so smartly. The restaurant has been remade: No longer a neighborhood spot, the Bean is a downtown dining destination. Even before chef Max MacKissock served his last meal at 33rd and Tejon, you could sense the transition. His cooking had evolved from straightforward (albeit excellent) dishes to more intellectual and expressive concoctions. The deconstructing and dehydrating demanded a bold platform. And the new space, housed in the historic Saddlery Building on the corner of Wynkoop and 15th, is a proper showcase. Diners looking for the old Bean will likely be disappointed, until they grasp that underneath the gloss, the philosophy—good food is good fun—is the same. Dishes are spirited (the truffle and the hare; one potato, two potato; pot au pho) and often feature wild juxtapositions, but the combinations are sound and thought-provoking. Most important, dishes are as exciting to eat as they are to look at.

Hot Seat: The two-seater against the window in the west corner ensures privacy, a little quiet (the space can be noisy), and an opportunity to take in the scene.
Don’t Miss: Hand-rolled couscous with smoked date purée, roasted cauliflower, and ras el hanout
1500 Wynkoop St., 303-623-2665, thesqueakybean.com 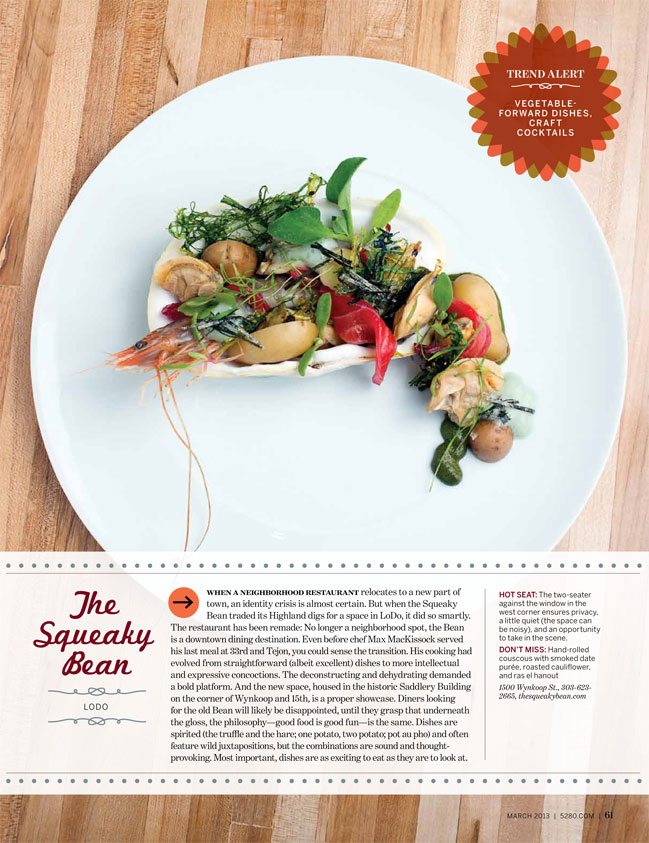