There’s another tenant-landlord dispute at hand (see Common Grounds, Geez Louise, Encore Restaurant), and this time it involves Skoops Eatery. The Cheesman Park cafe opened about 18 months ago, just a couple doors down from Dazbog Coffee on the corner of Ninth Avenue and Downing Street. And therein lies the problem.

According to Skoops’ owners Tim Hamann and Eddie Horn, Dazbog has been trying to run them out since they opened. “On our first day they came in and took pictures. They never even said hello. Then we heard from their lawyers about what we can and what we can’t serve,” Hamann explains.

Skoops, which first opened as an ice cream and sandwich shop, has since added dinner service. At no time has the cafe posed as a coffee shop. In fact, the menu doesn’t list a single coffee drink. One particular bone of contention appears to be Skoops’ excellent, house-made baked goods (see my post on the stellar brownie), which no doubt overshadow those in Dazbog’s pastry case. 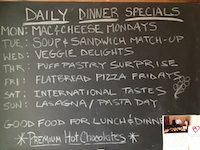 Hamann and Horn, who cannot afford to hire a lawyer, initially planned on expanding their space but now they’re expecting to lose their lease when it comes up for renewal in a few months. Hamann says that in addition to a constant barrage of lawyer activity, their lease has gone from being a simple two-page document to nearly 15 pages. “We’re different entities,” says Hamann of Skoops and Dazbog. Indeed, Skoops has evolved into a mini restaurant with nightly specials (pictured) that bolster the daytime sandwich board and Boulder Ice Cream selection. And given how perennially busy Dazbog continues to be (I stopped by yesterday afternoon), it seems there’s plenty of room for everyone.

Additional comments do not enter you into the giveaway, which ended March 26, 2013.