You know that feeling when a dinner party is over and you look around your kitchen and see red-stained wine glasses and plates with small bits of food left and realize that the fun part is over? That’s how Laura Letinsky‘s still-life photographs make me feel—like I missed the entire party and am stuck with just remnants. But somehow I’m not upset about it. The Chicago-based artist’s lifelike frames are sometimes weighted with foodstuffs and related objects; at other times they appear noticeably absent of any and all things. Letinsky talks about her pieces in her own words, below. Read what she has to say and then check out “Laura Letinsky: Still Life Photographs, 1997-2012” at the Denver Art Museum through Sunday, March 24. 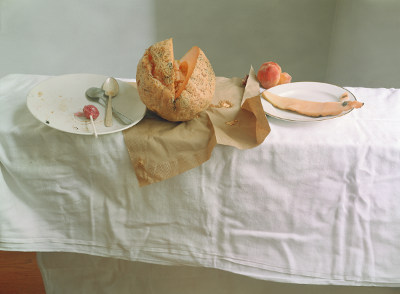 “I think the reason why I became a photographer as opposed to a painter (which is initially what I thought that I was going to do) has to do with the way that photography is so much a part of our daily life. Everything that we encounter—now Facebook and all the other digital stuff—but certainly advertising photography and documentary photography and photography in magazines and television and film media, it’s all photographically based. The fact that it exists in our culture and is a language was a tool I was interested in engaging with.” [Untitled #54, 2002] 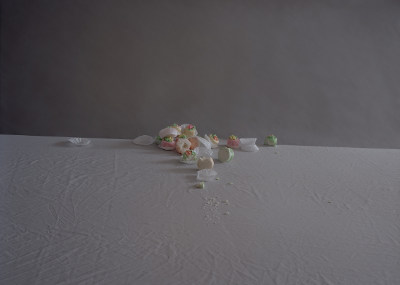 “I think that photography is always related to absence because the photograph shows you what was there and, in so doing, it shows what’s absent because what was there is no longer there. That really intrigues me. It’s always the ‘that has been.’ It’s always absent. It’s always after the fact. The promise is over, so what’s left?” [Untitled #31, 2009] 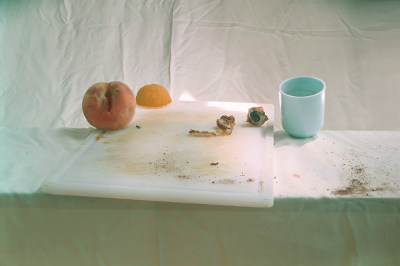 “Initially when I started, I was photographing tables where I had eaten or cooked or prepared meals. Over time, that sense of having to start from an actual place shifted; I instead would use a tabletop as a studio or platform or landscape to investigate or explore.” [Untitled #64, 2002] 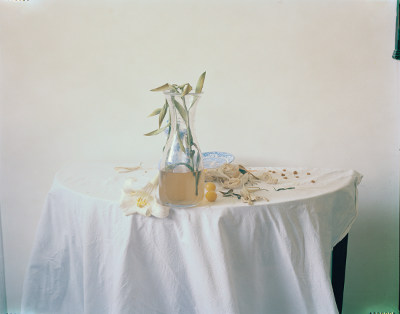 “Conceptually or ideologically, I’m really interested in the way that the small, the private, the intimate, the domestic relates to the larger social sphere and the way that one produces and consumes the other. Society produces material culture that we consume, that we then inhabit, that we then reproduce, that we then produce the society that we consume. So there’s this whole cycle of production and consumption. As a feminist, I was interested in the way that still life is a debased genre and that women that do work that is about home, it’s thought of, ‘Well of course they do work that’s about home because that’s what women do.’ And yet everyone has a home, everyone lives, everyone eats, everyone has a body. That corporality is base to all of us. So the dismissal of the very entities that occupy the largest space in our life and the way that they get dismissed or belittled is really interesting to me.” [Untitled #32, 2001] 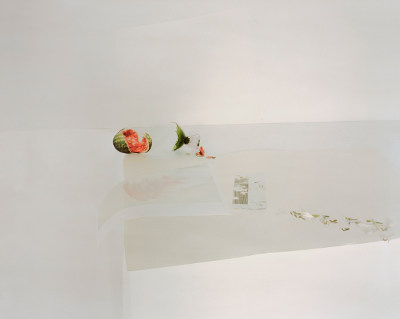 “Everything gets spoiled. Nothing remains pure, unsullied. The whites are always sullied, they’re wrinkled, they’re stained, there’s marks on the wall, or else they’re blindingly white so you almost can’t look at them and you can’t see anything in them. The white is sort of this play on our expecations or desire for perfection and the impossibility of that. [Untitled #31, 2011] 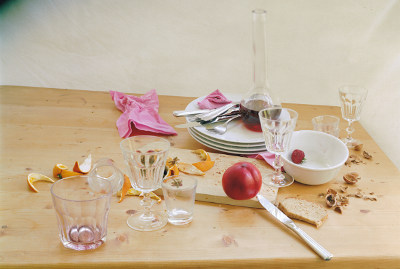 “I try and make them look—also in terms of the scale of the images—palpable so you can get a sense of their physicality.” [Untitled #38, 2001]