A full day of powder hunting at Wolf Creek Ski Area—the snowiest mountain in Colorado—puts just about everybody in the mood for some good beer (or at least, it should). On a recent weekend trip, that led us to Three Barrel Brewing Company in the nearby town of Del Norte.

Head brewer John Bricker officially opened Three Barrel in 2005. An avid home brewer, he bought the current side-street building and ran his insurance office in the front and the brewery in the back. The beer grew so popular, though, that Bricker opened a tasting room (in the former office, which has since moved next door) and started bottling his brews last August.

The room has just a handful of tables and some bar-stool seats that face the tiny kitchen, where they whip up delightfully crispy wood-fired pizzas (sadly, only until 8 p.m.); order the Blanca with olive oil, garlic, spinach, red onion, roasted red pepper, kalamata olives, and feta. The taproom has 12 taps filled with a rotation of the brewery’s 27 varieties. The lineup includes everything from traditional brews like brown and pale ales, to seasonal brews like smoked porters and a series of sours. My recommendations: Trashy Blonde (for something light and refreshing), Burnt Toast (a surprisingly smooth and easy-to-drink brown ale), and Black Yak (a Guinness-like conconction that was actually quite manageable for a dark lager). 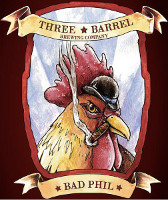 Currently you can only buy the beer at the taproom or nearby establishments in Pagosa Springs, Alamosa, South Fork, and Monte Vista. But: General manager Will Kreutzer says the brewery is planning to start distrbution to Denver by the end of April. The intial launch will be at Mondo Vino in Highland.

Kreutzer (who is also Bricker’s son-in-law) says the expanding business won’t change Three Barrel much, though. “We enjoy the fun of it. These are small batches of big beers,” he says. “We’re going to try to hold on to that lifestyle as long as we can.”

Backstory: One of the first things you’ll notice at Three Barrel is the creative—and somewhat odd—names and images Bricker bestows on his brews: Freeze Cat. Pemba Sherpa. Goofy Foot. Each of them has a story behind it, and we got the inside scoop on one. Bad Phil, a pale ale (pictured, right), is s0-named because Bricker would take care of a neighbor’s chicken when he was out of town and a rooster—named Phil, of course—would attack the fowl.