Hey, we know that guy.

Two of the Colorado Rockies’ coaches actually hail from the days when games were still played at Mile High Stadium, before a move to the new LoDo stadium introduced Denver baseball fans to the Blake Street Bombers. One of those coaches is manager Walt Weiss, who handed in his Rockies player’s uniform 16 years ago. We were curious how he’s changed over the years. 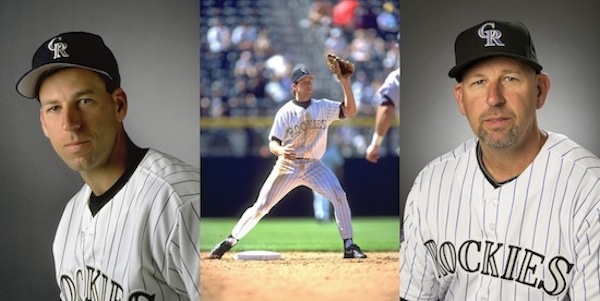 Managing the Rockies is a task. But Weiss isn’t new to the organization. The black-and-purple’s new skipper took over at shortstop in the club’s second season and played in Denver until 1997. Weiss saw success as a player; he was named the American League Rookie of the Year in 1988 and played for the Oakland A’s when they won their World Championship in 1989. Even when fans didn’t see him on the field, the 49-year-old has continued to work inside the world of baseball. Weiss served as a Rockies special assistant to the general manager from 2002-08 and coached at Regis Jesuit High School, even leading the Raiders to a state 5A championship. He has also been busy raising four sons—Blake, Brody, Bo, and Brock—with his wife Terri.

Check back in next week when we rewind the clock on another Rockies player-turned-coach.

Photographs courtesy of the Colorado Rockies. Bradi Wells also contributed to this story.