Hiking one mile likely sounds like child’s play to most Coloradans. But this isn’t any old mile: Throw in a 41 percent average gradient and a couple thousand stairs, and a distance typically used as a quick warm-up becomes a massive test of will. We’re talking about the Manitou Incline at the foot of Pikes Peak, which was recently opened to the general public after being off-limits to law-abiding hikers for more than 20 years.

The grueling pitch is what’s left of a scenic cable car ride (originally used to haul materials to build pipelines on the peak). After a rockslide closed the attraction in 1990, intrepid trekkers (an estimated 350,000 annually) discovered a new challenge—and stunning views—in the steep stairway made of railway ties that were left over after the rails were removed.

Until recently, however, hikers were breaking the law by trespassing on tracts of land owned by Colorado Springs Utilities, the Pikes Peak Cog Railway, and the U.S. Forest Service. After three years of trying, a grassroots group called the Manitou Incline Task Force succeeded in formally opening the climb to the masses in February. Before you tackle it yourself, here are some numbers that demonstrate the enormity of the undertaking.

Read a first-person account of hiking the incline here. 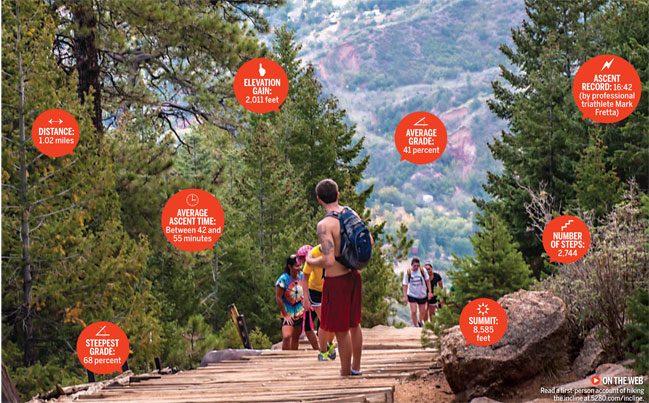