Here’s the good news: More than 48,000 people donned their most outlandish (and realistic) costumes at the second-annual Denver Comic Con (DCC)—almost doubling last year’s attendance. The bad news: That surge (understandably) overwhelmed organizers and created cranky fans in what felt like never-ending lines.

The worst of it came Friday, when the queue stretched all the way around the Colorado Convention Center. Even those who paid extra for coveted VIP passes had to wait (unless they made the smart decision to have their paper tickets mailed ahead of time). Poor signage and ill-informed volunteers also left many wanting, judging from complaints posted to Facebook and Twitter. 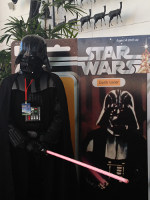 And yet, as frustrated as some surely were, once inside, grousing turned to cheering as fans engaged directly with their heroes. George Takei, Felicia Day, Wil Wheaton, and William Shatner all drew huge crowds. Hard-core fans also got to mix and mingle with their favorite comic book creators. And the mavens people lined up around the block to see? “I’ve done better at this show than I think I’ve done at any show,” says comic book artist Amy Reeder, a Westminster native who traveled here from New York.

But like a villain who lurks in the shadows, the threats facing next year’s Comic Con are as present today as they were before this year’s show began. Here are three (humbly submitted) suggestions for making next year an even better experience:

1. Make the ticket price worth it. People pony up extra hard-earned money to have a better experience. So give it to them: Let the VIPs in earlier and keep the doors open later for them. Schedule VIP-only autograph sessions. There needs to be incentive for buying VIP.

2. Smarter use of technology. Stop using whiteboards and con-wide broadcasts to announce changes or cancellations. Instead, push real-time updates through the handy guidebook app for iOS and Android.

3. Respect the wait. Too many would-be attendees waited in line for an hour or more only to be told tickets had sold out when reaching the front of the line. That’s just wrong. Make sure volunteers are informing people in line—and throw in a gift certificate or some other small “thanks for waiting” token of appreciation.