Even though I live in a city, my small-town roots demand a combination of funnel cakes, pulled pork, and beer—staples of the classic town fair—come June and July. The Louisville Downtown Street Faire, held Fridays during the summer, promised me a little bit of home-away-from, all within a short drive from Denver.

I was expecting a tiny jamboree of Louisville residents but was pleasantly surprised when I found the historic downtown streets packed with people, vendors, and food and beer stalls. Some of the boutiques, a frozen yogurt shop, and the Old Louisville Inn restaurant stayed open for business, but the crowds gravitated toward the pavilion where live music had people dancing, singing, and holding up their beer (CJ Chenier and the Red Hot Louisiana Band, a Zydeco genre group, played the night I visited). 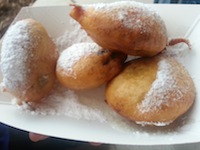 Parents with tots shouldn’t be put off by the beer scene, as there are plenty of options for the wee ones, from rock climbing to blow-up obstacles courses, and playful jousting (my favorite). Foodies won’t be disappointed either, with classic fair offerings such as fried Oreos (I’ve found my new fair favorite food). Bonus: I burned off some of those calories by hula hooping later. Sure, it was silly, but in all the right ways to satisfy my small-town fair fix.

Why we love it: The small-town feel.

Cost: Entrance is free, but prices for food and drink vary, and the kids’ area requires tickets.

Getting there: From Denver, take U.S. 36 west. Exit right onto 96th Street. After a few miles, make a left onto Pine Street. Drive until you’ve reached the downtown area.