Finger strength. Alex “AJ” Johnson says it’s the single most important asset for bouldering, a sport that requires athletes to clamber up, down, and across low-to-the-ground rocks, sans ropes and harnesses. Johnson has always been able to hang onto just about anything for long periods of time. That inherent strength propelled her to the top of the sport quickly (hello, the North Face sponsorship), but she continues to toughen up those all-important digits by doing timed hangs on small wooden ledges with a 30-pound dumbbell hooked around her waist. ? Though most of her competitors are more genetically suited to the task (smaller, more muscular), the Wisconsin native has one inborn attribute they lack: “dude-size hands,” as she puts it, large enough to palm a basketball. Johnson also got a bit of a head start. As a kid, she scaled trees, houses, and churches before she found what her parents considered a more constructive outlet—the climbing wall at a local gym. Now, she’s turned that adventurous spirit into a career. She climbs year-round—outside when the weather allows, or at the gym. She cross-trains by sprinting for one-minute intervals on a treadmill or going on three-mile jogs. She kayaks when she can make time and meets a trainer four to five times a week to do body weight exercises like one-armed pull-ups at the gym. Johnson avoids lifting, which builds heavy muscle mass not conducive to climbing.  ? Her efforts have paid off: Johnson won bouldering’s highest honor, the World Cup, in 2008 and 2010. But she continues to push herself, knowing she still has work ahead of her: like eventually forcing herself to trade her current mealtime staples of Taco Bell tacos and Coke for salads and water. 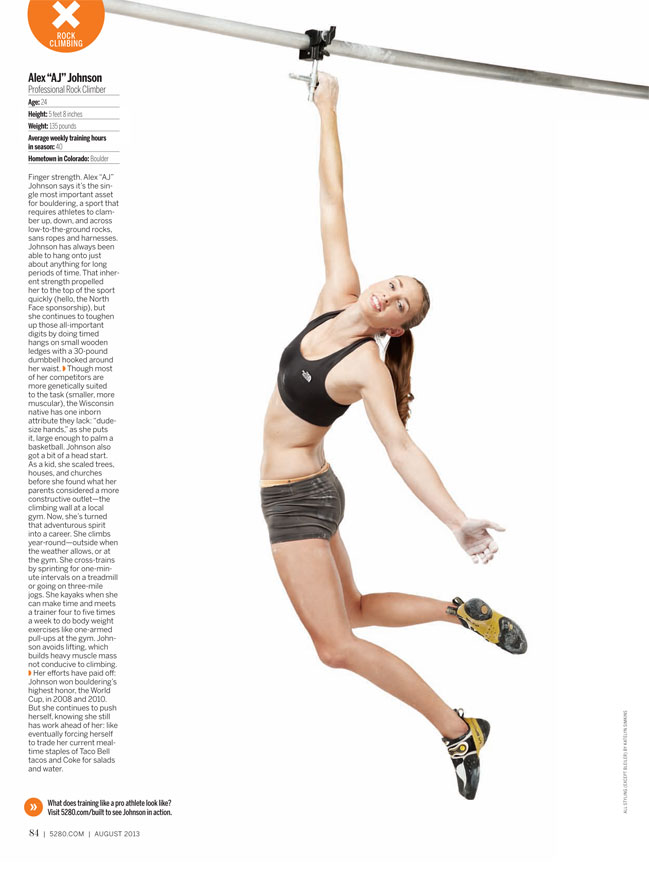 When you’re as talented as Carlos Gonzalez—and a team offers you an $80 million contract—you work hard to stay off the disabled list. The Colorado Rockies left fielder devotes at least an hour after every game to injury prevention. He works with a strength coach, two athletic trainers, and a massage therapist to get stretched and kneaded and then hits the hot and cold tubs to help alleviate the issue of the day.  ? The routine is critical to keeping alive the dream he’s had since his older brother introduced him to baseball as a five-year-old in Venezuela. When it comes to workouts, CarGo’s objective is to work twice as hard as everyone else. “I lift weights like a guy who’s going to hit in the cleanup spot,” he says. “In the offseason, I run like I’m a leadoff hitter.” But his workouts aren’t just about getting ripped. Gonzalez uses plyometrics (jump-training exercises designed to increase muscle power and explosiveness) and resistance training (bands or weights used to improve strength, tone, muscle mass, and endurance) to make sure he is a complete player: one who can steal bases, hit the long ball, and throw guys out. ? Though he’s still a few years shy of 30, the outfielder says he approaches every weight-training session, run, and practice with the knowledge that it could all end tomorrow. His focus on the details on and off the field has helped him improve as a player, but when he’s at bat, all of that disappears. “When you step into the batter’s box, the last thing you’re thinking about is your mechanics,” he says. “It’s just natural.”

Craig Alexander logs enough miles each week—an average of 12 swimming, 65 running, and 310 cycling—to cross the state of Colorado north to south. The grueling sessions are a requirement if he wants to maintain his winning streak: The triathlete is a three-time Ironman World Championship winner (and one of only a handful of men to clinch back-to-back wins, in ’08 and ’09), a two-time Ironman 70.3 World Championship winner, and the record-holder (8:03:56, set in 2011) for the Ironman Hawaii course. ? Alexander’s been competing in triathlons for almost 20 years, and he believes good biomechanics—his body’s natural ability to avoid injury in sports that require repetitive motion—is what has helped him ascend the podium more times than most. As a physiotherapy student at the University of Sydney, Alexander gained a profound understanding of the human body—an expertise that’s made him his own best coach. One method to his success: studying the course and his competitors before a race. He also carefully calculates his necessary liquid and calorie intake for any competition, which, during Ironmans, usually adds up to about a liter of fluid per hour and 250 to 280 calories from electrolyte drinks. He typically doesn’t eat anything solid until after he crosses the finish line. ? Unlike most sports, in which anyone over the age of 28 is considered past his or her prime, Alexander says his “engine” has gotten stronger with time. His goal at age 40 is no different from when he was 21: “It’s not about the results,” he says. “It’s about improving as
an athlete.”

Meet Olympic champion Missy Franklin and there are a few things you’ll notice immediately: She’s tall and lean and, in her swimsuit, she cuts the muscular stature you’d expect of a world champion. ? It’s easy to dismiss her as a genetic jackpot winner. But Franklin has also worked nearly every day since middle school to become a four-time Olympic gold medalist and one of the most celebrated—and adored—athletes in the United States. “I had this huge body, but I didn’t know how to use it,” says Franklin, who graduated from Regis Jesuit High School this past spring and will start at the University of California, Berkeley this month. “I train so hard because I want to get better. I’m just so happy I get to do this every day.” ? That passion is what motivates her to get through her strenuous workout sessions. Each week, Franklin swims thousands of meters (up to 12,000 during double practice days) at metro Denver pools and then lifts dumbbells and powers through 180-pound trap bar squats, among other exercises, at least three times a week with Colorado training guru Loren Landow. All of that effort can burn 5,000 to 6,000 calories a day, so Franklin’s mother oversees her carefully constructed diet. Among her favorite dishes is a Greek salad with fresh bread (hold the butter), olive oil, and balsamic vinegar. ? Beloved by her fans for her girl-next-door persona, Franklin says living a normal life outside the spotlight is just as important as her training. Proof: After her senior prom in May, Franklin and some girlfriends got home around 1 a.m. The Olympian was up and on the road by 5 a.m. to train in a pool 30 minutes away—but she arrived back at her house in time to cook raspberry-chocolate-chip pancakes with warm maple syrup for everyone for breakfast.
—Robert Sanchez

Marvell Wynne drinks two gallons of water the day before a game. He limits “dessert” to an occasional frozen Hershey’s Nugget. And he starts every morning with a bowl of oatmeal mixed with coconut oil, extra-virgin olive oil, cinnamon, honey, berries, bananas, cacao, and chia seeds. “You can’t eat poorly and play soccer; you just can’t,” says the 2006 number-one draft pick. “There’s no way to run around and perform your best.” ? Dietary discipline like this would help almost anyone get into shape. But combine Wynne’s nutritional strategy with weight training twice a week and regular one-hour runs in the offseason (to prep for the five to six miles he averages during games)—plus a helpful set of genes from his Major League Baseball–playing father—and it’s easy to see that Wynne derives his in-game productivity from focus and hard work as much as he draws on his pure love of the sport. ? Wynne first stepped onto the soccer field at three-and-a-half years old. By high school, he decided that baseball was too slow, and his mom had already forbade him from playing the other type of football for fear he’d get hurt. ? There are no prizes for speed in professional soccer, but if teams clocked their athletes, chances are Wynne would rank near the top. In his senior year of high school, the defender ran the 100-meter dash in 10.38 seconds—just 0.8 seconds behind Usain Bolt’s world record. That lightning-quick speed, combined with Wynne’s broad shoulders and ripped quads, has allowed him to create a dominant defensive presence on the field much larger than his below-average (for a defender) 5-foot-9-inch frame would suggest. 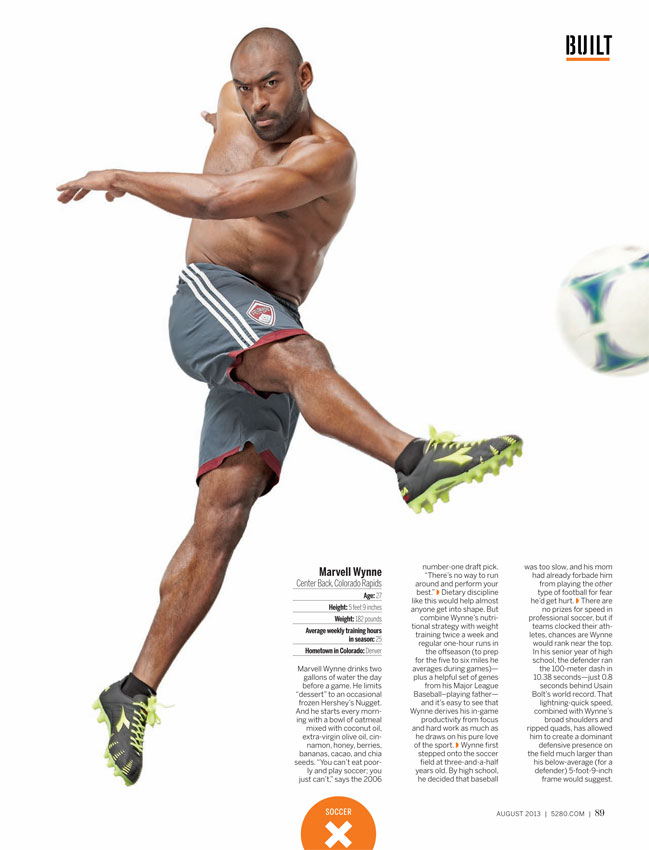 Dance choreographers worldwide seek out the long, lean muscles and arched feet that Chandra Kuykendall was born with. But it still takes strict adherence to a nutritious diet and long hours on the stage, in the studio, and at the gym to maintain the petite physique and musculature the 15-year veteran of Colorado Ballet needs to leap across the stage. ? The dance industry has long been known to be particularly hard on the human body—and psyche. The negative eating habits that have plagued ballerinas for years once haunted Kuykendall, who admits to struggling with her body image as a teenage dancer: “Your body is changing, and it’s really hard not to get wrapped up in that,” she says, “especially when there is a ‘typical dancer’ look.” With age, however, has come wisdom. In her 20s, Kuykendall abandoned both the calorie counting and the dangerous belief that skinnier meant better when she realized, with the help of a supportive family, that “health takes a priority over everything.” ? Her focus today is moderation. Breakfast and dinner are Kuykendall’s larger meals (think oatmeal or an egg with toast in the morning). The dancer limits her carbohydrate intake by avoiding the bread basket and big pasta dishes. Three years ago, that measured lifestyle helped her get back onstage just six months after having her first child. That, and eight hours of daily rehearsal in the studio. ? Even her off days aren’t truly “off.” When Kuykendall isn’t rehearsing or performing, she heads to the gym to take a yoga class or to use the elliptical, treadmill, or recumbent bike. Once in a while, she takes a quick break and zones out during a pedicure. “But I always have to tell them right away, ‘I’m a ballerina, so don’t be too shocked.’?” 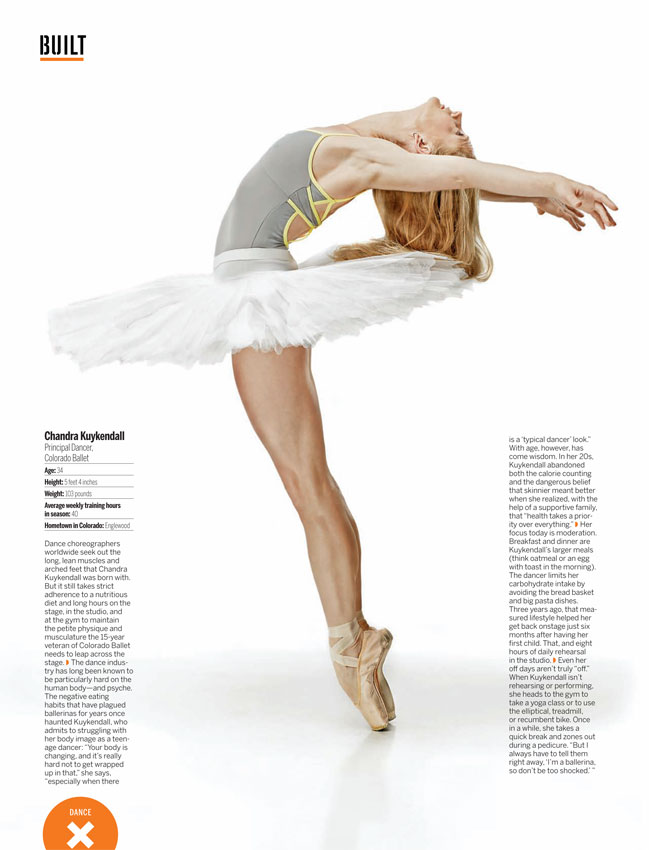 In many ways, Gretchen Bleiler has grown up alongside her sport. When she turned pro more than a decade ago—after falling in love with snowboarding at age 11—the newfangled halfpipe was just 18 feet tall and 400 feet long. Today, the terrain-park staple is a towering 22 feet high and stretches to 550 feet. What once was a relaxing weekend pastime now requires a gymnast’s build, year-round access to snow, and a radical workout regimen. ? When the Olympic silver medalist and four-time Winter X Games gold medalist isn’t chasing powder around the globe, she hits the gym hard with her trainer four to five days a week using weights, exercise bands, and medicine balls to strengthen her shoulders, core, and lower body, as well as to improve her balance. A halfpipe rider’s most important asset is her core. “Every trick you throw off the lip is initiated from there,” Bleiler says. Her trainer runs her through multidimensional exercises (a plank exercise on a slide board, for example) that work her entire body so she can execute those huge Crippler 540s. ? Bleiler has, in the past, maintained a strict diet: For one five-month period, that meant no gluten, dairy, caffeine, or alcohol. Although the limited menu made her body feel great, it restricted a lot of everyday treats, like a chocolate-chip cookie. She’s since found a less-limiting compromise, focusing on getting in three servings of veggies and two of fruit daily. It’s a middle ground that allows her to stay healthy, eat more normally, and still enjoy her favorite post-medal-ceremony meal: a cheeseburger.