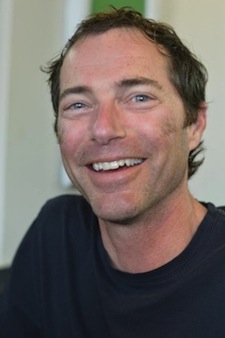 Nineteen years ago, the corner of Arapahoe and 22nd streets wasn’t the prime piece of downtown real estate it is today. That didn’t faze Brian Dunn, who opened Great Divide Brewing Co. in a building that was used for band practices. For a while, it was unclear who would last longer: The hopeful musicians or the hopeful brewer. Almost two decades later, Great Divide remains. Here, we talk with Dunn about how the area has changed, Denver’s bar scene, and what kind of employee he hires.

I grew up in a family where my mom was a really big cook, and my dad was really into beer, spirits, wine. That’s just his hobby. And there are a lot of kids in my family—five kids—so meals were a big deal in my family. You always were there for dinner, so I just kind of grew up around good food and good beer.

5280: You have a graduate degree in environmental policy and management, though. Why make the switch?

I spent a year and a half doing it, and then I was like, “I don’t think I want to pursue that. I think I’m going to make a run of the brewery.” So I did a marketing study. Then I wrote a business plan and found a couple people to put money into it, and that was ’93. We opened in May of ‘94. 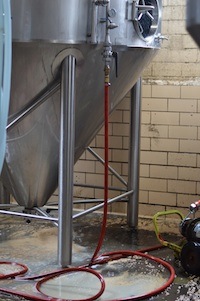 5280: And you’ve been at the corner of Arapahoe and 22nd streets since the beginning. What was this area like then?

It was really, really different. It was before Coors Field, so all these were two-way streets. And there were a lot of guys sleeping here on the sidewalk. All the same homeless shelters here were all here then, but it was quieter to where people could sleep on the sidewalks. Now it’s so crazy. People don’t sleep out here so much. People are still homeless, but it was really quiet.

5280: And now, you’re a cornerstone of the neighborhood.

5280: Did you ever think the brewery would be this big? What were you hoping and dreaming about?

Two beers that are no longer here: Whitewater Wheat was an American wheat beer and Arapahoe Amber, which was kind of a malty amber.

No, the brewery’s evolved beyond those beers. They were great to start with. …Beers come and go. Even though some beers sell well, we get rid of them just so new beers can come in. We can’t just have 50 beers all the time.

5280: But some of your flagship beers, like Yeti (a stout) stick around, but you keep tinkering with variations. 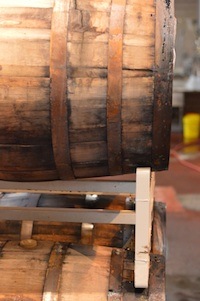 5280: Did you know that when you started brewing it?

No, we had no idea. It was just, “Let’s make an imperial-style, a really strong stout. It’s going to be American style, 9.5 percent alcohol. It’s going to be big, bold.” …The first variation we ever did was oak-aged Yeti. It gives a little vanilla character from the oak, and it rounds out the rough edges. And it became a mellower version of Yeti. That was the first variation of Yeti, and it kind of kept going from there.

5280: How has Colorado’s beer scene changed?

I think people’s tastes have really evolved. We’ve been here for 18, 19 years. New Belgium, Breckenridge, years before that. In that amount of time, beer knowledge in Colorado and elsewhere has changed immensely. And I think people’s tastes have changed as well. People are more knowledgeable about beers, and they’re looking for something a little bit different. They’re now learning about different varieties of hops. They know the difference between Belgium beers and German beers. They know American style versus English style. So it’s amazing. People know a lot more about beer. We know people are looking for beers that are perhaps more interesting than just amber ales.

5280: How did you educate people about beer in the early days?

There were a lot of really nice restaurants 15 years ago when I walked through the door to sell them beer, they’d be like, “Well we don’t really sell beer. We’re a wine restaurant. We’re a good restaurant.” And that’s changed now to where every good restaurant in Denver has great beer.

5280: Now, we’re seeing an abundance of beer appreciation. Do you think there are there too many brewers?

No, I don’t. I mean, there’s a lot of new interest in the market for sure, but my sense is that the interest and the demand are outgrowing that. I think there’s room for a lot of new people actually. The beer needs to be good. It’s a really competitive market, and I think the expectations in the community are that beer coming from craft brewers should be really, really good.

5280: You started as a home brewer. What was the first batch of beer you brewed?

I think it was Scottish ale, actually. Now, we make a Scotch ale. It’s a similar style. I actually have all my home brew recipes. Sometimes I pull them out. It’s actually pretty funny.

5280: Where did you buy equipment back then?

I made my own equipment out of igloo coolers and copper pipe, hoses and valves. …It made five gallons of beer at a time.

The brewery doesn’t spend a lot of time on branding and marketing and direction. It’s just sort of whatever feels good, we do. And it’s worked out really well. We don’t do focus groups. When we come out with a new beer, I decide what the style will be with input from the sales department and the brewers. We don’t research beer styles or the demand for beer styles before we decide we’re going to make it. It’s just like, “Will it fit in the lineup? Yes. Okay then we’re going to make it.”

That changes. Right now, somebody sent me a pack of Bell’s Hopslam. That’s a double IPA from Bell’s in Michigan. It’s awesome. It’s a great beer. It’s my favorite beer this week.

5280: What about your favorite place to drink?

Euclid Hall. Thin Man. Those are probably two of my favorite bars. You can go there after work, coming back from a formal event, wherever, wearing shorts. It doesn’t matter. It’s easy. But any bar in Denver is like that.

During day one, I was the only employee. So I was the brewer, the sales person. I did all the accounting. I did bottling, the kegging. I was the only employee, the only full-time. We had one volunteer guy. But now we have 45 people. I run the business. So I have six or seven managers that report to me. I do all the banking stuff, all the finance stuff, trademark stuff, the corporate stuff, all the expansion-related stuff. I don’t make beer anymore, but I’m involved with it, a little, from the distance. It’s definitely more vision and day-to-day running the business.

Email. Email kills me. Not even the phone. The phone rings, but it’s no big deal. It’s email. The email I can’t win. 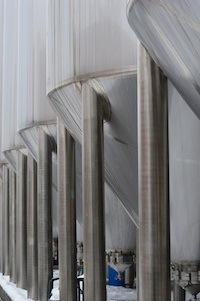 5280: What about distribution? It seems like everyone I talk to has problems keeping up with demand. Are you dealing with that, too?

It was for a long, long time, but that’s why we [brought in more] tanks. We can grow into those in a couple years. For so many years, we would only bring in equipment after we knew we had the demand. But then we had a period from three to six months while tanks were coming in where we were backordering. We had a period for years, probably about four years, where we backordered a lot. And people don’t like that. Stores don’t like it. If the bars have you on tap, they expect to get it. They don’t want to hear: “Hey we’re out of stock. Put a cup over it.” We were that brewery for a long time. Now we’re spending money years ahead to make sure we don’t have that problem. So we are not having that problem even though we’re growing 25 to 35 percent a year, but it’s only because we’re getting better at planning years ahead, not a month ahead.

This business is crazy, and it’s growing really quickly. It’s doing well, but it takes everybody in this place to brew. There’s a lot of people that work here to pull this off from taproom people to production people to sales people, accounting. It’s amazing. It’s really fun. And it takes so many different kinds of people to run this place.

If you want to work in production, it really helps if you make beer at home. Because making beer at home is a long process. It takes five to eight hours to make what could be five gallons. That’s two and half cases of beer. If you spend seven hours on a Saturday making two and a half cases of beer, you’re probably pretty into beer. So, to us, that’s important. You have to be pretty detail oriented. You have to be clean, meticulous, careful. That’s what it takes to work in here.

5280: Tell me something people may not know about the brewery.