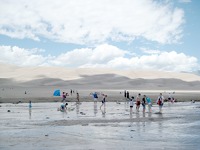 Why we love it: Colorado is landlocked, but the sand dunes make you feel like you’re on a beach.

As a gravity-phobe, I prefer hiking uphill to traveling down. But there’s one exception to that rule: The Great Sand Dunes National Park and Preserve. There, flying down the piles of sand—on foot or sand sled—is the marquee event.

The improbable dunes—set against the Sangre de Cristos range—were formed as snowmelt and streams brought sand downstream to settle in the San Luis Valley. Fierce winds (ones that can blow at 40 miles per hour) forced the sand to accumulate against the mountains. The result? A sandbox with peaks that top 700 feet for us to play in.

During the hottest months of the year, the sand is unbearably hot (the surface heats up to 140 degrees). Plan to wear hiking boots (yes, you’ll still get sand in between your toes and socks) and arrive at the park early. You can always cool down later in the shade near Medano Creek, next to the throngs of picnicking families who were smart enough to bring sun umbrellas and lawn chairs. (The creek often dries up during mid-summer, so don’t expect to do any swimming.) 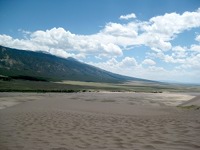 Park your car at the Dunes lot and walk .3 miles to the creek. From here, pick your path up to the tallest dunes—High Dune and Star Dune. The constantly shifting sands make a consistent trail irrelevant, but follow others’ footsteps to make the trek easier. High Dune is just 1.25 miles away, but the park estimates that it’ll take you 75 minutes to reach it. If you continue on to Star Dune (three miles, one way), plan on a two-hour ascent and a 750-foot elevation gain (the visitor’s center is around 8,500 feet).

Now, for the fun part: Head on down the slopes. Ride. Glide. Sled. Run. My husband had hauled a rugby ball to the top and we spent the descent kicking and chasing after it. We saw others sliding down the slopes in special sand sleds (normal sleds or snowboards can get stuck in the dry conditions). I have no idea how long it will take you to get back to your car, because no one—including us—seems to take a straight path back. Instead, stay and play. After all, you don’t get to hit the beach very often. 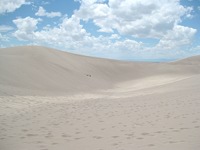 Tip: These were the last photos taken by my camera before the miniscule grains of sand ground the lens to a halt. Plan accordingly and bring your smart phone.

Bonus: On my next visit, I’ll stay after dark for one of the park’s astronomy programs.