Fall leaf-peepers aren’t the first treasure hunters to head for the mountains in search of gold (and red and orange). Prospectors arrived on the Front Range in the 1800s and spread deep into the Rockies, erecting small villages they abandoned when the mines went dry. Today, remnants of these outposts are still scattered throughout the backcountry. “Many historians see ghost towns as a kind of 3-D text about the way we lived,” says state historian Bill Convery. See for yourself on a fall adventure to one of these five high-country ghost towns. 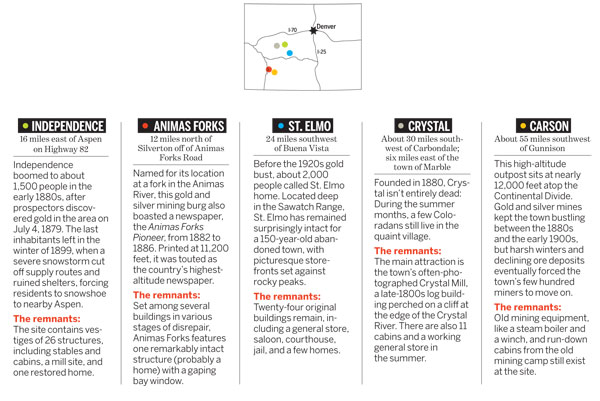 Why some Ghost towns survive…
> Isolation
It’s costly and difficult to demolish remote, high-mountain towns, so government agencies like the Forest Service and the Bureau of Land Management just leave them alone.
> Benefactors
Individuals, communities, and, sometimes, private landowners protect the towns and support their restoration (for example, the Aspen Historical Society’s work on a cabin located in Independence).

Why some disappear…
> Weather
Mountain conditions such as snow, avalanches, and wildfires wreck old
buildings.
> Visitors
Tourists can slowly destroy towns by walking away with “souvenirs.”
> Demolition
Some towns, like Tiger near Breckenridge, were intentionally leveled in the ’60s and ’70s after squatters settled in the structures.