Chances are you’ve spent many happy hours in buildings designed by Denver architect Jeff Sheppard, a founding partner of Roth Sheppard Architects, which is a firm known for forward-thinking and elegant commercial buildings. That’s because Sheppard spends almost all of his waking hours thinking about—rather, obsessing over—how buildings influence the way we live and feel.
Long before you dined at the new modernist Izakaya Den restaurant, Sheppard thought about how the front door handles would feel in your hands. When you went shopping for that new sofa at Cherry Creek’s Room & Board, he’d already realized you’d have better luck if the store were a series of spaces scaled like your living room. And if you love to linger in the Denver Art Museum’s retail shop, it’s because he knew you’d feel good in a light-filled gallery that doubles as a cafe.

“People think architecture is about the creation of beautiful spaces. That’s true. But it’s first about understanding people’s behavioral patterns in those spaces,” he says. “We’re always thinking about how what we do impacts the activity taking place inside.”

“Always” is pretty accurate. Sheppard sleeps two or three hours a night, he says. This “interesting character trait,” as he calls it, means he essentially gets an extra full day every week. What does he do with that time? “I sketch and draw and read about architecture,” he says with a wry smile and a shrug.
It’s a passion he cultivated early in life. A natural artist, he remembers flipping through an encyclopedia his father gave him and meticulously sketching the images he found. Sheppard followed those interests to Georgia Tech, where he earned a Master of Architecture degree, and then headed west. On his way to California, he interviewed at W.C. Muchow and Partners, a Denver firm known at the time for taking talented young architects and raising their trajectories. “They hired me on the spot,” he says. “I hadn’t even moved out of my car.”

His first week at the firm, he sat at the desk of an associate, Herb Roth, who was on vacation. When Roth got back, “he accused me of stealing his architect’s scale,” Sheppard laughs. “I don’t think I did.” No matter: The two became friends, and within a few years, in 1983, they decided to launch their own firm, Roth Sheppard Architects. “We felt like we really needed each other to do a great project,” Sheppard says. Roth handles many of the firm’s initial meetings with clients, helping develop what’s called “the program”—essentially the clients’ objectives for the building. Sheppard follows with the design work. In many ways, they’re two halves of a whole. “We’ve been together longer than I’ve been married,” Sheppard says. “We’ve never even had separate offices.”

Then again, at the firm’s new design studio—in a historic building at 1900 Wazee—nobody has separate offices in the traditional sense. The 4,000-square-foot space is anchored by a 55-foot-long communal table that runs like a spine through the room. The firm calls the studio “Temenos,” a Greek word that translates loosely as “a sacred place.”

“The idea is to eliminate almost all boundaries, to change the way we work,” Sheppard says. Beyond fostering collaboration, the studio thrives on a motivating concept: The communal space is open to the public, like a gallery. Wander in off the street, and you might peek at a half-dozen building models that reveal how your favorite restaurant or retail shop will look a year or two from now. “We like that tension—between public and private space—because it keeps us stimulated,” Sheppard says.

This kind of thinking captures clients’ hearts and minds. The Denver Art Museum recently hired him (again), this time to design a new administrative building (to be completed next spring). The structure will be within view of the angular, Daniel Libeskind–designed Hamilton Building, the Gio Ponti–designed North Building, and Allied Works Architecture’s Clyfford Still Museum—a “vortex of original creative architecture,” says Cathey Finlon, former president of the DAM and a current board member. Sheppard was the guy for the job. “We knew Jeff would be sensitive to the other elements but also deliver a very big idea,” she says. For the new admin building, for example, workstations are situated so that all staff members sit no more than 30 feet from a window. (Not bad for a 50,000-square-foot structure.)

Big ideas are Sheppard’s currency and sustenance, but he’s only satisfied if they don’t smack of grandiosity. “It’s very easy to do something complicated,” he says. “It’s much more difficult to do something simple. I think people appreciate things that are well crafted, simple, and straightforward. We create those things. And we layer into them ideas that stimulate people’s minds and bring them comfort”—and that makes all of our lives better. 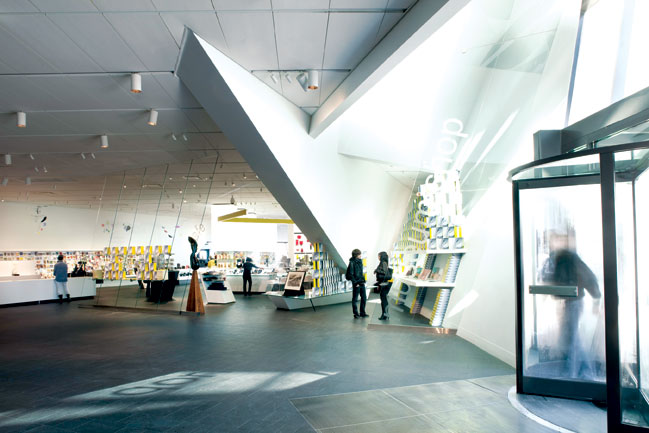