The faces and stories that belong to the millions of undocumented immigrants in the United States are unique, varied, and often unknown. Inside Out 11M, a mobile art installation and photo booth, is on a mission to capture this diverse portrait of America and raise awareness about immigration reform. This summer, New York-based 11M dispatched two photo booth trucks to 18 different cities to start conversations about immigration and capture people’s stories via photos.

Earlier this afternoon, one of those trucks was parked at Civic Center Park. They’re spending three days in Denver this week, and tonight they’ll be at Su Teatro in the Santa Fe Arts District from 6 to 8 p.m.

The art installation is part of the larger Inside Out project, created in 2011 by artist JR to capture personal identity via portraits displayed in public spaces. “Everyone’s an immigrant in one way or another, when you think about it,” says Josh Geyer, co-leader of the West Coast route. 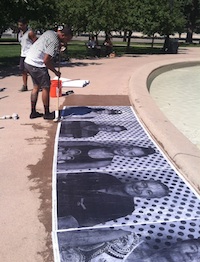 The photo booth is free and once inside you have six seconds to come up with your best happy, scary, silly, angry, or diva face before the camera clicks. Pose however you want, as long as it is one person per portrait. No sunglasses or pets allowed. The photos are then printed in black and white on five-foot by three-foot posters and attached to walls and sidewalks in public spaces. Earlier today, posters were pasted to the sidewalk around Voorhies Memorial in Civic Center Park.