We’re declaring this the season of sumac. The brightly colored Middle Eastern spice awakens taste buds with hints of citrus—a welcome contrast to fall’s drearier days. Curious about what to cook with the ingredient? We consulted two Boulder experts for approachable recipes for any home chef. (Find more ideas in the immensely popular Jerusalem: A Cookbook.) 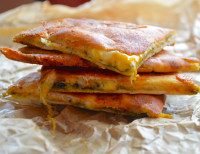 Chef-farmer Lyle Davis (Pastures of Plenty farm and Big Bang Catering) got nostaligic with this take on a grilled cheese (pictured, right). “When I was a teenager, my mom began exploring Middle Eastern cuisine and shopped Middle Eastern markets in NYC, which is where she discovered sumac,” Davis says. “The traditional method would be to finish toasting the pitas without the Jarlsberg. She added the cheese as a kind of Americanized snack for me when I was a teenager, and I absolutely loved it. Today, I love using sumac in lamb kebabs, whole-roasted fish, and grilled eggplant slices.” 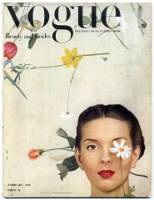 Warm the garlic in the olive oil with the salt and pepper until the garlic is translucent. Generously brush the olive and garlic mixture on the inside of each pita round. Sprinkle the sumac around the entire inside of the pita slic

e. Then, in a broiler, just begin to warm the pita for 20 to 30 seconds. Remove from heat. Sprinkle on the Jarlsberg cheese. Place it back under the broiler until cheese is melted. Garnish with extra sumac.

Fun fact: Bettina Bolegard, the revered fashion model, is Davis’ late mother. In 1945, she graced the cover of Vogue. This print (pictured, right) hangs in Davis’ farmhouse kitchen facing the stove, to guide over his culinary creations.

The Kitchen executive chef Kyle Mendenhall devised this straightforward recipe (pictured, above) just for 5280. It’s not for the kitchen shy, though. The lemonade calls for sumac berry clusters (you can forage for them in Colorado) as opposed to the ground spice. Mendenhall’s tip: “A good time to forage the berries is anywhere from late August through the fall. However, if it rains, the berries lose their “hairs” (or coating) and their flavor weakens, so make sure they’re dry and concentrated.”

Bring water to a boil. Once it’s bubbling, add sugar. Place sumac clusters in a large teapot or non-metal container. Pour boiling water over the sumac. Steep for one to two hours, stirring occasionally. Strain through a cheesecloth or a coffee filter. Serve chilled.