Immigration is at the heart of every American’s story. It is my past as much as it is yours. Perhaps no population’s narrative has been front-page news in recent years more often than Latino Americans.

According to the U.S. Census Bureau, 16.9 percent of the country’s population is Hispanic or Latino; in Colorado, that stat jumps up to 21 percent. Even more telling: Hispanics under 18 are the fastest-growing population in our state. But the influence of Latino Americans on our nation is not just a tale of the modern era (contrary to election year storylines). “This is not a new community. The current political climate too often perpetuates these notions of Latinos as newcomers or outsiders in the United States,” says Elizabeth Escobedo, a professor of Latino History at the University of Denver. “It’s important to understand the long-standing participation of Latinos and Latinas in national formation. Latino history is not a subset of American history. It is American history.” 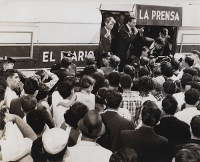 Escobedo is one of dozens of talking heads—Dolores Huerta, Herman Badillo, and Gloria Estefan among them—that will be featured in Latino Americans, a six-part PBS documentary series that premieres Tuesday, September 17 (check local listings for times). Each segment covers a different historical time, from the 16th century through present day. “It’s a rewrite of American history. This time it includes Latinos,” says series producer Adrianna Bosch.

Bosch put together a team of mostly Latino producers from diverse nationalities. The goal: to ensure that the series depicts the Latino American story accurately and from varying perspectives. “As a living organism this nation will change with these people, as it has already, and as it has with every group that has immigrated to America,” Bosch says. “It’s a narrative that continues. We will change. America will change. How that change occurs really depends on what opportunities there are. We, too, are responsible.”

Here, an excerpt of Escobedo’s personal narrative (catch her in “Episode 3: War and Peace” talking about the role of Mexican-American women in the years surrounding World War II):

It’s very much a family story for me. My father is Mexican-American, and he grew up in Los Angeles during the Great Depression and also during the WWII era. His brothers went overseas to fight, and his sisters remained on the home front. This was the first time that they were actually able to earn a really good wage in the workforce. They were among the many Latinas who were able to earn unprecedented wages in wartime industries (by and large due to manpower shortages [because of] the number of men serving abroad). For my aunts this was a moment when their lives opened up economically and socially. The patriarchs were away from home and so they had a lot more social opportunities. They were earning an unprecedented amount of money that they would both share with the family and keep for themselves. Much of this money was spent on leisure culture; they bought zoot suits. It was a moment of unprecedented opportunity—but also a moment of conflict that remained. In spite of the fact that my family members and [other] Latinos were serving their country in the war, by the time it ends, they would still face an America that had segregated schools and public places. Given these wartime sacrifices, veterans were feeling imbued with this new sense of entitlement given their sacrifices. [That feeling] continued afterward with civil rights activism in the post-war era.