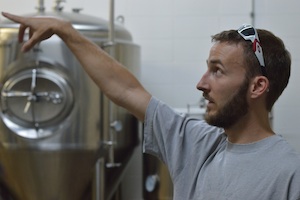 When Jeremy Gobien spied a neighbor brewing beer in his garage, he started asking questions. And then he started volunteering at a brewery. Soon, he hatched a plan with his wife to pack up their lives in North Carolina, move across the country, and start a brewery in Colorado. About two years ago, they opened Copper Kettle Brewing Company and won a gold medal at the Great American Beer Festival. Now they’re distributing their Mexican Chocolate Stout, hoping to expand their brew house, and dreaming about releasing more bottles. We sat down to chat with Gobien about barrels, going to school for a decade, and Colorado’s weather.

Brew to try: Mexican Chocolate Stout, the brewery’s flagship brew that is now available in bottles (pair it with lamb burgers).

5280: When did you make the decision to open a brewery?

I have a PhD. in engineering. I went to college for 10 years, so I spent an entire decade at a university. I have four degrees. I am massively overeducated. It was an interesting discussion with my parents the first time, saying, “Hey, I’m going to quit my day job and open a brewery.”

No. Not at all. There were definitely some heated discussions about the intelligence of that decision. My wife and I spent everything we had. Everything. I think the day we opened the doors here we only had $2,000 or $3,000 left. We had spent crazy amounts of money in two months. 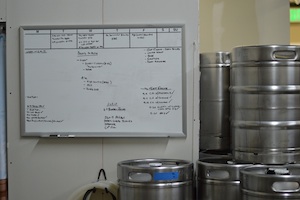 5280: You are both from the Carolinas. Why Colorado?

Colorado seemed like a really good fit. Fun, outdoors stuff. Great weather. I think my parents pictured Colorado as the frozen tundra. They didn’t understand that it is actually really nice, even in the winter. You get some extremes. That’s the thing that is interesting getting used to: the extreme weather. In North Carolina, it is just cold and rainy in the winter. It’s nothing crazy. It snows every third year. You get half an inch, and the entire city shuts down for half a week because they have no idea what to do. All the bread and milk is gone, just if there is a hint of snow.

5280: What’s the biggest lesson you’ve learned since opening the brewery? 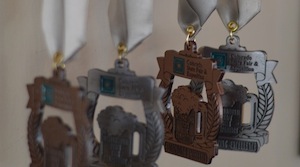 We don’t really associate ourselves with any style of beer. We try to do everything really, really well, which is a big challenge because there is so much variety. The thing we’re most known for is certainly the Mexican Chocolate Stout. We do a lot of traditional beers. A lot of German lagers. Belgian ales. The hoppy beers are in such high demand we have to make hoppy beers. You have people come in that get really upset if you don’t have anything hoppy on your menu.

Oh, yeah. You’ll have people leave. They’ll be like, “You don’t have an IPA? I’m out of here.” Honestly. They don’t even want to look at another beer.

5280: You have a lot of small-batch beers on your list, like an agave beer with lime zest aged in tequila barrels. That sounds like a strong margarita.

It’s got really intense flavors, but it is not a strong beer. It is only 4 percent. It’s the tequila. Your palette associates tequila with a shot being a lot of alcohol, so you think alcohol.

Kind of. The fun part is to show people that you don’t have to have a double imperial IPA to have flavor. You can make beers that are 4 percent alcohol that have lots of flavor. To me, that’s the sign of a well-made beer. If you taste the alcohol, they’ve actually done something wrong during the process. You shouldn’t taste that burning alcohol. It should sneak up on you.

5280: Your first foray into bottling and distribution is the Mexican Chocolate Stout. It is spicy and big. That’s not a safe choice. Why did you start there?

You’d be surprised. We’ve found it to be a really good strategic move because it is easy to get it in a liquor store. If you walk in and you’ve got another IPA, they’ll say, “Look, we’ve got another 10 IPAs. Bring me something else. Strategically, it allows us to get into liquor stores very easily. I’ve only had one liquor store turn me down and say no thanks and they actually changed their mind when they got a new beer buyer.

I love barrels. If I had my way, I’d have someone else handle all the production brewing stuff and I would just have my pet project of barrels to play with and that would be my focus. 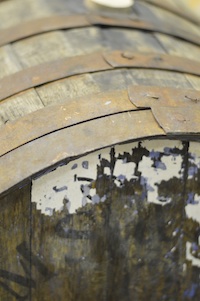 These are Scotch barrels. They are from Macallan’s Scotch. These are actually about 50-year-old oak barrels. You can see the old markings here. It says Williams & Humbert, which is a sherry winery in southern Spain. I scraped the paint off of the barrel and I found the markings of the original user of the barrel. So, this was a wine barrel in Spain in the 1960s. And then it was a Scotch barrel in Scotland from the 1970s until about this year. It had Scotch in it for about 45 years. And we’re going to put beer in them this year. I’m 31-years-old, so these barrels were filled with Scotch well before I was ever born.

5280: You’ve doubled your original space—and you’re growing. Will you need to move soon?

No, we’re going to upgrade our equipment. We’d like to have our brew house instead of being a 100 gallons be more like 500 gallons. Then it only takes two batches to fill the big tank. Instead of 48 hours of labor, you’re down to 12 or 14 hours. It’s a huge savings on time and effort. It immediately makes you more competitive, but it also allows you to increase your maximum output because there’s a limit to how much you can possibly make on the small equipment. It’ll make us more efficient, and it’ll grow our maximum capacity. It’s going to do a lot of good things for us.

Right. More bottles. More styles. More coverage. All of those things. This is a huge investment. Just the brew house will be more expensive than our entire investment when we first opened. 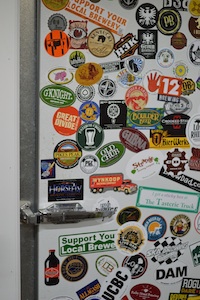 5280: Where’s your favorite place to drink in Colorado (aside from your brewery)?

The way it works for me, personally, is that when I’m doing my deliveries, I’ll usually stop at breweries along the way just to catch up with people. It is inevitable when you own a brewery and you walk into a brewery and they know you, you are going to have a beer. It is forced upon you. I stop at a lot of breweries when I’m out and about and just have one beer. But, honestly, after working in a bar for two years my wife and I like being at home a lot more now. When we drink, it is on our back porch.

5280: Do you have a favorite Colorado brewery?

I like Odell. I think their range of products is very creative and very high quality. I think their marketing is at the very top. I think they run an excellent business and make really unique beers. As a businessperson I can really appreciate what they put into it. 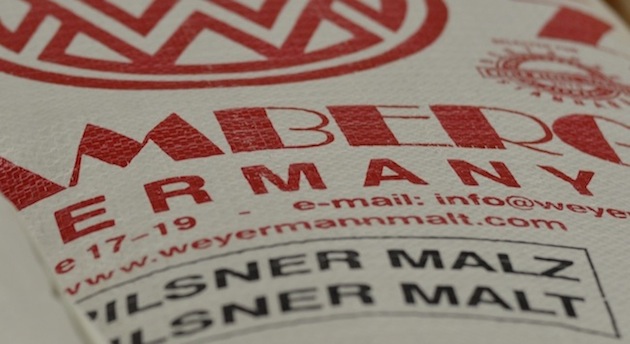