These days, winning a football game at any level requires offensive innovation, and one of the nation’s most creative play-callers works the sidelines right here in Colorado. Since 2000, Colorado School of Mines head coach Bob Stitt’s unconventional offenses have helped the explosive Orediggers roll the scoreboard like a slot machine, routinely recording 40, 50, even 70 points per game. His expertise even helped quarterback Chad Friehauf win a Harlon Hill Trophy (the Division II equivalent of the Heisman) in 2004. “When I got here, we absolutely couldn’t run the ball, and if we took a snap under center, we’d get sacked. That’s when we started coming up with things that weren’t conventional,” Stitt says. “How can we take our type of athlete—who isn’t as big, strong, or fast as someone else—and still have success?”

The coach enters the 2013–14 season with a 90-57 overall record (69-41 in conference) and national recognition thanks to the 2012 Orange Bowl, when the West Virginia Mountaineers ran up a jaw-dropping 70 points against the Clemson Tigers using Stitt’s “fly-sweep” play again and again. “It’s a different kind of thinking, but it works if you have the confidence,” Stitt says. “You can’t listen to people who think you’re crazy.” We chatted with the coach to learn the phil-osophy behind his high-scoring maneuvers and the secrets to his now-ubiquitous play. 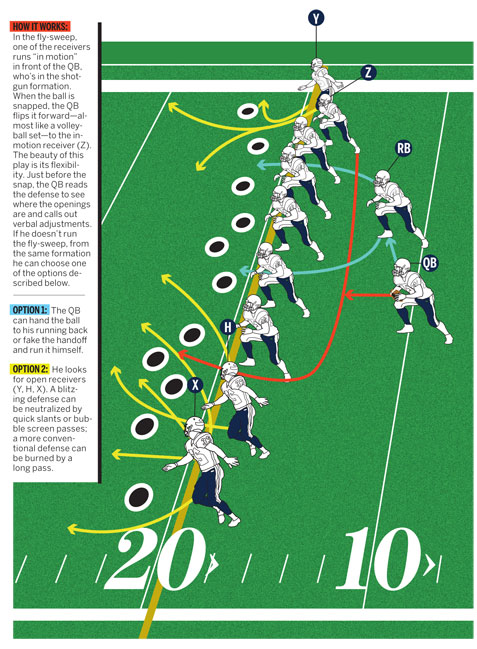