Editor’s note: The GPS launch scheduled for early November was postponed, meaning ULA technically has 75 straight victories, or 76 when MAVEN goes up (as planned) Nov. 18.

While NASA and Colorado’s Lockheed Martin Space Systems tend to get more glory, in part because they’re responsible for the sexier parts of space missions—the information-collecting devices aboard ULA’s rockets—without a ride to the sky, their gadgets would be worthless. ULA’s rocket scientists have designed, engineered, and built rockets to deliver everything from GPS to spy satellites to the Mars Curiosity rover. And now MAVEN, which according to NASA will explore “the role that loss of atmospheric gas to space played in changing the Martian climate through time.” Or, put another way: Where’d the water go?

“We like to joke,” says Chris Chavez, ULA’s communications director, “that we employ more rocket scientists than any company in the world.” Which isn’t entirely a joke. ULA’s Colorado headquarters, a five-building campus, employs more than 1,700 people. Another 2,000 work at its manufacturing plants and launch sites in California, Texas, Florida, and Alabama.

It’s a high-stakes business. Each rocket can cost millions. And it doesn’t take much to postpone a liftoff: Changes in wind velocity and direction, for example, can ground the rockets because the shift could blow the aircraft into a tower during the launch. Rescheduling a launch isn’t like rescheduling a flight, either. In some cases, the stars literally align only once every few years. The window to launch MAVEN, for example, only comes around every two years, when Mars’ orbit brings it close enough to Earth for a rocket to reach it in a few months (instead of a few years).

Little wonder, then, that the pacing begins early on launch days at ULA’s Denver Operation Support Center, a kind of secondary mission control for ULA’s launch sites at Vandenberg Airforce Base in California and at Cape Canaveral in Florida. During a recent launch, by the time the countdown reaches two minutes, the crowd gathered to watch live video of the rocket has gone silent. The lights dim.
As the countdown hits zero, the rocket’s engines ignite, eliciting a murmur from the crowd. Seconds later, when the 23-story tall Atlas V rocket is airborne, nosing toward space at a blistering 22,000 miles per hour, the murmur has grown to a buzz. Applause. A few shouts. Success. Again. 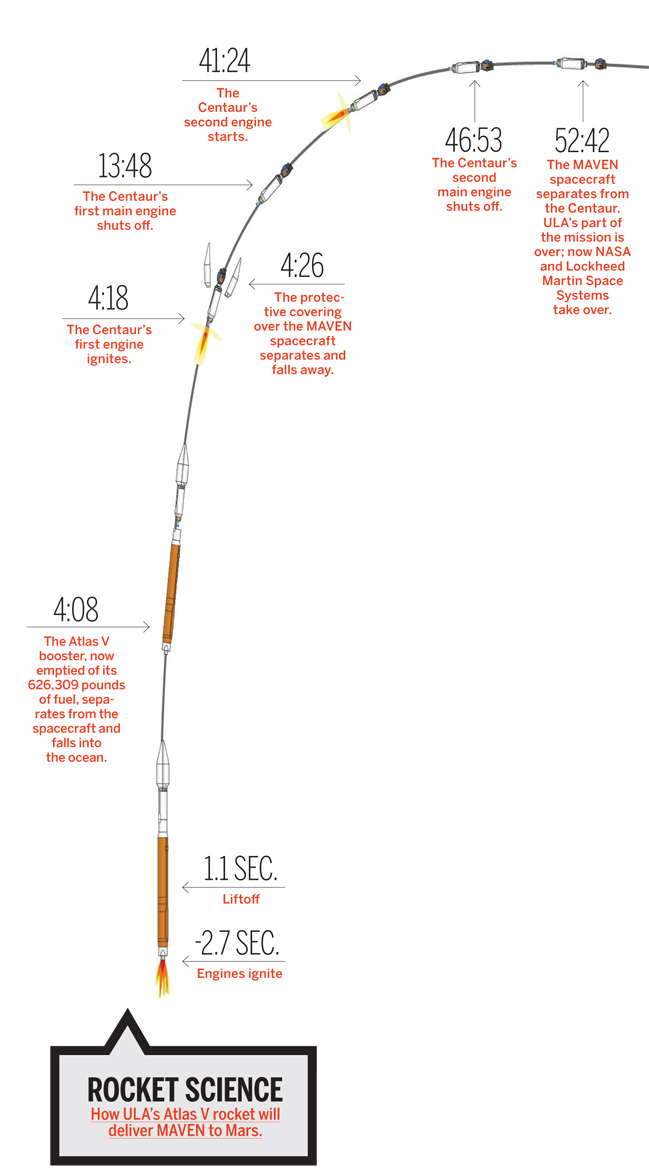