Anyone who’s skied Peak 8 on a Saturday knows that long lift lines and crowded runs are par for the course at Breckenridge Ski Resort. With more than 1.5 million skier visits (in 2010–11, the most recent count), the mountain is tied with Vail as the nation’s busiest. The ribbon cutting of Peak 6, Breck’s fifth and northernmost summit, should help disperse the hordes: When the terrain opens in mid- to late December, it will boost the ski resort’s size by nearly a quarter. In fact, Pat Campbell, the resort’s senior vice president and COO, promises that the development will “alleviate line waits, especially during peak periods.”

The anticipated reprieve was hard earned. The area’s opening culminates six years of U.S. Forest Service environmental impact studies, reviews, and opposition from locals who argued the development would harm both a habitat for threatened Canada lynx and a beloved sanctuary for backcountry skiers and riders. Ultimately, USFS officials concluded that the loss of 70 acres of lynx habitat would be offset by the resort’s agreement to fund conservation elsewhere in Summit County. And, even without Peak 6, backcountry adventurers still have more than two million acres to roam within White River National Forest. Now we just pray for snow. 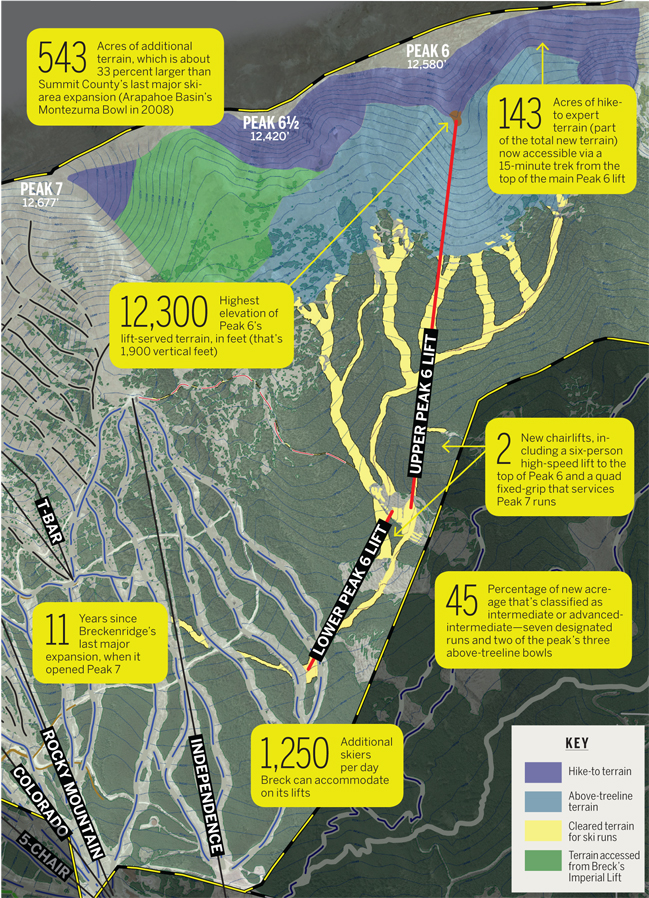