Sometimes it’s nice to enjoy a beer alone: when you’re unwinding on the couch after a long workday, perhaps, or after raking up all the leaves in your backyard. But we usually prefer drinking with friends. And that often turns into some sort of game. Especially in Colorado where we can’t even play kickball without a beer in hand (hello, sloshball!). So to liven up your weekend barbecue or your next dinner party—we won’t judge—we pulled together this list of 10 drinking games. Prost!

Did we forget one? Have a favorite that’s not on the list? Let us know in the comments.

Click through for 10 of our favorite drinking games. Remember: Drink responsibly. 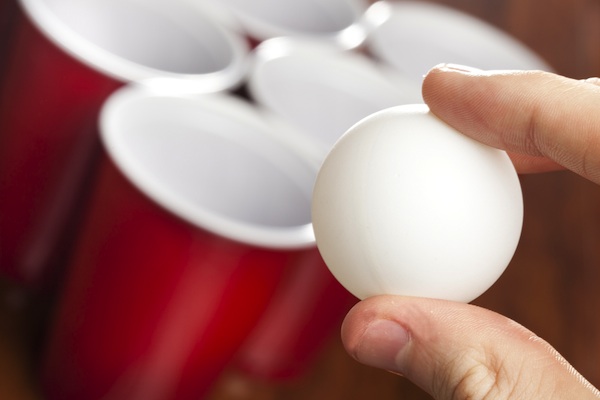 How-To: Split into two teams of two. Set up 10 plastic cups (we recommend the Solo brand) in a triangle formation on each side of a long table; fill them all with beer. Also, place a cup filled with water off to the side for each team. Determine which team will shoot first. The first team attempts to throw both of their ping-pong balls into cups on the other side of the table. If no cups are made, it’s the other team’s turn. If one cup is made, one of the other team members has to remove it from the triangle and drink it before placing it off to the side (alternate who drinks). If both cups are made, the other team has to remove both cups, drink them, and then give both balls back to the shooting team for a second chance. The game continues until one team has made all of the cups. The water cup is used to clean off balls after wayward shots.

There are, of course, variations. It’s always polite to ask what the house rules are. 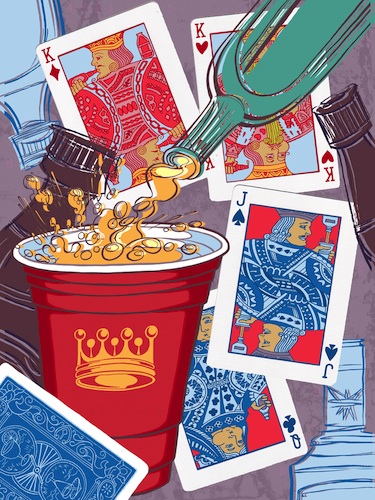 How-To: This is a great game for a larger group. Place an empty cup in the center of a table, and spread an entire deck of cards evenly around it in a circle. Going clockwise, players draw a card one-by-one. If a King is drawn, that player must pour some of whatever they’re drinking into the center cup. If any other card is drawn, the player must follow the actions designated for that specific card (see this sample list). The game continues until the fourth King is drawn. That lucky player has to drink the Kings Cup regardless of what booze is in there (it’s often a mix of alcohols). 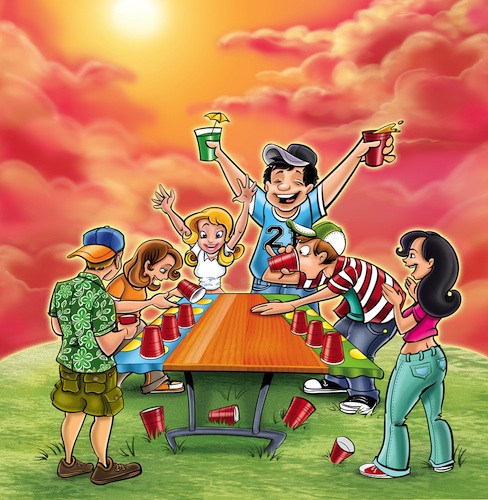 How-To: Split up into two teams (it doesn’t matter how many players are on each as long as the teams are even) and line up with one team on each long side of a table. Each person fills a cup about a quarter-full of beer. The starters on each team clink glasses and chug their beers. When the cup is empty, the player must put his/her cup on the table, hanging slightly off the edge, and attempt to flip it over so it lands on its top (usually by flicking it up with his/her finger). Once he/she flips it successfully, the next person starts drinking. Go down the row until the last person (the “anchor”) has successfully flipped his/her cup. The first team to flip all its cups wins. Start again.

Step It Up: Play Blackout. This game combines Flip Cup and Beer Pong into one. Play Flip Cup as usual. Once the last player has successfully flipped his/her cup, he/she picks up a ping-pong ball and attempts to make a cup into the six-cup Beer Pong set-up on the other side of the table. If he/shesucceeds, the cup is removed, the anchor on the other team has to drink the beer, and the round ends. If he/she misses, he/she has to run around the table and become the start of the Flip Cup line. The round continues until one team makes a Beer Pong shot. Get the name now?

How-To: There are almost too many variations of this game to provide just one set of rules. Regardless, the goal is to bounce a quarter off the table and into a glass. Here are some options to get you started.

How-To: Set up four shot glasses in a row behind a designated shooting spot. Each player from one team (you’ll need two teams, however many people) takes turns trying to bounce a quarter into one of the shot glasses. The glasses represent, in order, a single, a double, a triple, and a home run. After three strikes (missing all of the shot glasses), the player is out. Three outs, and it’s the other team’s turn. Runs are scored in the same way they would be in baseball—but you’ll have to keep track of where the runners are in your head. Where’s the drinking come in? Each shot glass is filled with beer. If a player makes a quarter into a glass, he/she must drink the beer from the glasses behind the one he/she made. (For example, if you score a double, you have to drink the two other shot glasses.) An out means you have to drink all four. The opposing team has to take a sip of their drinks for every run scored by the “batting” team. Tip: You can also play Baseball as a variation on Beer Pong, so you use Solo cups and ping-pong balls. 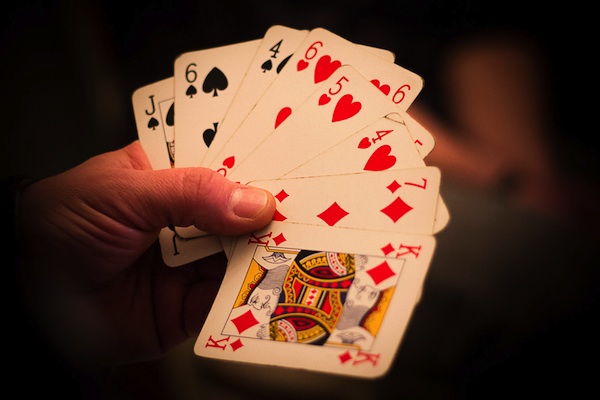 How-To: We’ve all played Asshole, haven’t we? If you haven’t, there’s a whole website devoted to explaining the rules. A quick intro: All cards in the deck are dealt. The goal is to get rid of all of your cards first. The first person to do so is the president, and the last person is the asshole (hence the game’s name). The president can make anyone drink throughout play. You can also create drinking-related rules.

Another Easy One: A co-worker clued us in to Magic Stick. Drink your can of beer. Duct tape a new can of beer on top of the empty one. Crack and drink second beer. Repeat until your “magic stick” becomes too unwieldy to drink from (or you can no longer handle the duct-taping process). 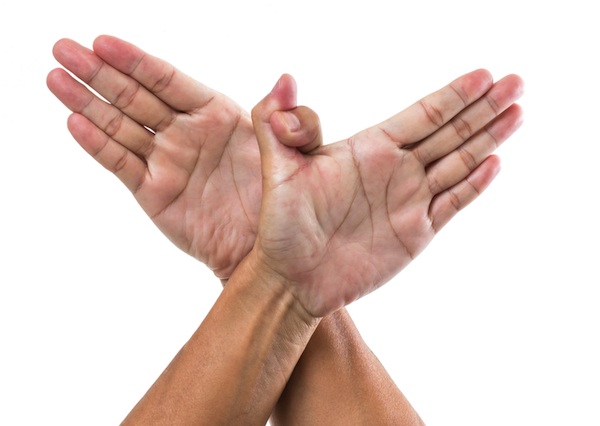 How-To: You can play this game with any number of people. Each person starts by picking a quick and easy hand gesture that represents an animal (see the “bird” pictured above) and showing the rest of the group. Then, everyone starts drumming on the table (my friends typically do two hits on the table and then two claps, but it gets confusing quickly). The first person does his/her hand gesture and then immediately does the gesture of any other player. That player then does his/her hand gesture followed by another player’s. It continues until someone doesn’t realize they’ve been cued or they react too slowly; that person then has to drink. Then he/she starts the next round. (FYI: This is the PG version of this game. Really, you can pick any gesture you want, but we’re keeping it clean.)