The restoration of Denver’s forgotten properties isn’t an easy gig, and likely requires structural overhauling and time consuming repair of aesthetics. But instead of just restoring, what if we took advantage of an opportunity to make those historic buildings even better than they were before? Project Art is doing just that through a policy that transforms these straightforward construction ventures into showcases for art.

Denver Urban Renewal Authority’s Project Art initiative, which commits one percent of DURA’s public funding to the revitalization or commisioning of artworks, is responsible for the installation of 59 new works and the restoration of numerous existing pieces in dilapidated and abandoned structures from Elitch Gardens to the soon-to-open Marriott Renaissance Hotel downtown since 2003. The cost: more than $4 million from public bonds. For DURA, the rewards justify all those zeros. “Our mission is to make Denver one of the best cities in the country in which to live. Promoting the attractiveness of our city helps us achieve that,” says Tracy Huggins, DURA executive director. “These pieces not only beautify our city, but they represent Denver’s fun and spirited culture as well.”

We couldn’t agree more. Project Art pieces are scattered throughout the metro area. To get your tour started, check out these three standout sculptures.

If you ride the light rail to a Nuggets game, you’ve probably noticed the seven 25-foot-tall steel sculptures (pictured, above) that line the front platform of the Pepsi Center–Elitch Gardens station. Commissioned by DURA in conjunction with the Regional Transportation Department, Denver-based sculpter and designer David Griggs crafted the colorful “Seven Sisters” as an abstract representation of the playful attractions the station serves. 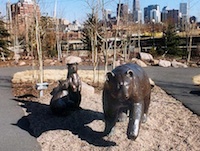 The bronze bears that greet visitors at Denver’s flagship REI are the work of sculptor Georgia Gerber. The black bear and her cubs—inspired by the Colorado lifestyle and REI’s commitment to getting people outside—were crafted out of clay before being cast in bronze. Together they weigh more than 800 pounds. 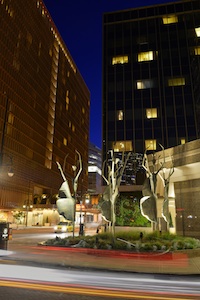 Ruth Keller Schweiss’ series of ballerinas is one the city’s most photographed sculptures. Commissioned during the remodel of the Adams Mark Hotel (now the Sheraton Denver Downtown Hotel) in 1997, the 16th Street Mall dancers were fashioned out of cloth, wire mesh, and epoxy clay and stand 18 feet tall.

Other pieces worth seeking out: the flying geese outside of Alameda Square Shopping Center near the corner of Federal Boulevard and Alameda Avenue; “Prairie Reef” in the median of Central Park Boulevard; and the “Denver” marquee that hangs above Welton Street at the Pavilions.

Editor’s Note: In our print story, we mention the Denver Dry Goods Building’s involvement in Project Art. Unfortunately, that project was vandalized and is no longer on display.