Getting a ‘new’ sported admitted to the Olympic Games lineup is, perhaps, even less likely than making an Olympic team. (Just ask the athletes who worked to get freeskiing added this year.) The process takes determination and persistence—traits ice climbers rely on each time they slam axe to ice. Next month, seven North American ice climbers are headed to Sochi with athletes from around the world for a “cultural demonstration” of the sport in Olympic Village, with the hopes of it becoming an official contest in future Games.

One of those invited athletes is Broomfield’s own Aaron Montgomery.

President of Ouray Environmental Services, LLC by day, Montgomery is also an accomplished rock and ice climber. The 32-year-old picked up the wintry take on the sport four years ago. “It just looked cool. I tried it, liked it, and had a knack for it,” he says. “Ice climbing is such an interesting medium in that it changes all the time, from when you arrive to when you’re climbing to when you leave.” He completed his first full season of competitions last year, including a number of World Cup appearances in Europe. 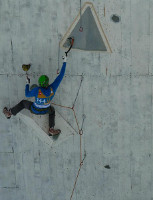 Though the process of ice climbing seems self-evident in the name, World Cup climbing—and what Montgomery and crew will be showcasing in Sochi—is a bit different. Ice, with its tendency to melt and shift, can’t be relied upon to be the same for every competitor. So events include manmade structures (see the image at right) with a designated route that climbers must follow. Winning is based on how high you get and, if there’s a tie, how fast you got there. “It’s more gymnastic in nature,” Montgomery says. “It’s called ice climbing, but it’s really dry tooling [climbing rock with ice equipment]. Ice only gets so hard. You go up and down. It has to be harder.”

To stay in shape, he trains at the Alpine Training Center in Boulder. Since the recent addition of twins to his family, he’s had to cut down from four days a week to a one-hour-plus Monday-Wednesday-Friday at 6 a.m. routine, plus climbing outside whenever possible. Workouts involve high-intensity circuit training, with a focus on back, arms, and core.

The demonstration in Sochi doesn’t involve actual competition, but Montgomery is still excited for the world stage. “It’s cool to be able to represent the sport and the growth of the sport,” he says. Perhaps this is step one toward a 2022 ice climbing appearance?

Try It: Want to give ice climbing a go? One of Montgomery’s favorite local spots is the Rigid Designator Amphitheatre in East Vail. A bit of advice from Montgomery: Don’t go until you know how to climb while protecting your natural playground.