The Drawback: The management team created some confusion by launching two different concepts – a full-service pizzeria in Boulder and a fast-casual derivative in Denver – with the same name.

Online chat rooms can be vicious places. And when the team behind Boulder’s nationally celebrated Frasca Food and Wine and Pizzeria Locale opened a pizza spot by the same name in Denver, anonymous posters were especially catty. Denver’s fast-casual expression of the wildly popular, full-service pizzeria in Boulder was criticized for slicing its pizzas. (In Naples, and at the Boulder location, they are served unsliced to be eaten with a knife and a fork.) Disgruntled customers complained that the pies are one inch smaller, forgetting that they are also significantly cheaper. Experts debated whether one or two, certainly not 10, more seconds in a blistering oven would give the Denver pizzas precisely the same crust char they were accustomed to in Boulder. Online comments bemoaned the fact that there are only two tap wines (a crisp Pinot Grigio and an earthy Barbera d’Asti) instead of the Boulder location’s James Beard Award–winning leather binder of wines, spritzers, and digestifs. Stripped of servers, a hostess stand, and more complicated salads like the frutti di mare, team Frasca was accused of taking a concept that worked so well in Boulder (a location that was named one of Bon Appétit’s top 50 best new restaurants in 2012) and “dumbing it down” for Denver. “You think we Denverites who aren’t breathing the rarified Boulder air are incapable of discerning a good pizza from Domino’s,” one Westword reader barked.

In many ways, the direct comparisons between the Boulder and Denver locations of Pizzeria Locale were understandable. No matter how forthright the crew was about its fast-casual intentions, co-owners Bobby Stuckey and Lachlan Mackinnon-Patterson didn’t do themselves any favors by using the same name for two different pizza concepts. But in the end, it’s the consumer-critics who sounded out of touch.

The management team was clear from the outset that the 3,000-square-foot Denver location was a different business model. “Pizzeria Locale Denver is [our] interpretation of fast casual,” says co-owner and master sommelier Stuckey, who worked on the Denver business plan for an impressive 18 months. The team’s laudable goal, in a world where eating at McDonald’s is cheaper than shopping in the produce aisle, was to bring quality ingredients to the masses at an affordable price. “We’ve got a huge problem in the United States,” Stuckey says. “Sometimes it seems like the only people who can eat good food are wealthy people.” Pizzeria Locale is a noble attempt to debunk that dining axiom. (Even the wine is cheap—a tumbler costs less than certain Starbucks drinks.)

Regardless of this explanation, Frasca’s owners are hardly the first white-tablecloth team to try their hand at the fast-casual genre. Wolfgang Puck, the Austrian-born celebrity chef most known for Los Angeles icon Spago, has been selling his Chinois Chicken Salad out of airport kiosks since 1991. Tom Colicchio, judge of Bravo’s Top Chef and five-time Beard-winning chef, entered the fast-casual arena in 2003 with the opening of ’Wichcraft, a sandwich stand that has grown to 17 locations. In New York City, the Bromberg brothers of Blue Ribbon fame just opened their take on over-the-counter fried chicken in August. It was only a matter of time before Stuckey and Mackinnon-Patterson, surely the most decorated duo between the Hudson River and the Sunset Strip, gave us their expression of quick-serve meals. Even so, you would expect Denver diners to recognize the value of a good fast-casual offering. This is a town that has given birth to Quiznos, Noodles & Company, Qdoba, Smashburger, Garbanzo, and Chipotle—perhaps the most responsibly successful fast-casual chain in the world.

It’s a comparison not to Pizzeria Locale’s Boulder predecessor but to these other fast-casual outfits that should be attracting the attention—and admiration—of area diners. On that front, the Denver location offers delicious Neapolitan-inspired pizza, cooked in just 120 seconds, for as little as $5.75 a pie—all this on an eight-block stretch of Broadway that already includes spots such as Fat Sully’s, the Walnut Room, Pie Hole, and Famous Pizza.

Pizzeria Locale’s pies are not pizzas that need dabbing with a napkin to remove a pool of orange grease. They are not the 24-inch behemoths of Super Bowl Sunday. The crust is not a uniform golden brown that benefits from dunking into a plastic cup of ranch dressing the minute it turns cool and crusty. No, Pizzeria Locale’s pies have a crust that is flecked with hundreds of beautiful bubbles the size of pinholes. Its underside is laced with a web of black char. The “cornicione,” or “end crust,” has a visible gluten structure that will make science teachers want to hold chemistry class over lunch.

These are the telltale marks of working with the finely ground (“00”) Caputo flour and an in-house sourdough starter. Pizzeria Locale’s dough is mixed, rested, and balled in a glass-walled room set to the temperature and humidity level of Naples. These are pizzas that are cooked in a 1,000-degree rotating oven that chef Mackinnon-Patterson had custom-built to mimic the heat of wood-fired cooking in a high-volume setting. This is toothsome, tangy pizza.

The toppings that Pizzeria Locale’s red-hatted pizzaiolos place on these individual, 11-inch pies are just as impressive. My favorite pizza is the Maiale. It comes bedecked with red sauce (made only of puréed San Marzano–style tomatoes and Italian sea salt), strip after strip of prosciutto crudo, thin slices of whole-milk mozzarella tucked like precious jewels between the sauce and the meat, and a heap of fresh, spicy arugula. The Mais is also worth trying. It’s a white pizza of fresh mozzarella, crème fraîche, corn, garlic, and prosciutto cotto. Also good: the American-inspired pepperoni pizza, which is generously layered with wide, two-inch discs of pepperoni made especially for Pizzeria Locale; the Bianca, a pie that includes charred, al dente broccolini, fennel-flecked pork sausage, and just the right bit of heat from red chile flakes; and the pizza shop’s best seller, a classic margherita.

While you’re busy watching the staff pull pie after pie from the oven with a pizza peel, don’t miss a menu of sides, which includes parsley-studded pork meatballs the size of quarters that come smothered in that deliciously simple tomato sauce. There is a selection of four arugula salads, tossed with ingredients such as grana Padano cheese, oil-packed skipjack tuna, and roasted eggplant. House-made iced tea is cold-steeped overnight. Succulent, pleasantly tacky prosciutto di Parma tastes like wafts of Italian countryside blowing past your rented Ducati. It is sliced on a red, impossibly shiny, hand-powered VDF slicer—a thing of Michelin-starred dining rooms, not fast-casual operations. “These guys are taking care of prosciutto the way it is being handled at Casa Bleve in Rome,” Stuckey told me of Jordan Wallace and Chris Donato, who oversee the Denver location. “We wanted a hardworking person to be able to have a nice slice of prosciutto,” Stuckey says of the impeccably sourced and handled meat that is available for just $3.50 a plate.

That respectable goal of bringing superb food to a wide range of diners seems to be working. Despite the early criticism from vocal food blog followers, Pizzeria Locale’s clean, white-tiled dining room is packed at lunch and dinner with X-ray techs from across the street at Denver Health; mothers reading to their toddlers across the tables; and entrepreneurs, gathered around high-tops in their jeans, pressed shirts, and Italian shoes, talking about their next business deal. The Denver location of Pizzeria Locale has a national following, too: Its budino (a velvety and rich butterscotch pudding) nabbed a mention in the New York Times, and Food & Wine’s restaurant editor recently named the restaurant one of the best new pizza places in the country.

That said, Pizzeria Locale Denver is not perfect—on one visit a salad was overdressed. On another I found myself wishing the lemonade was house-made. On a third I noticed the staff is still tinkering with pizzas like the Veggie and the Supreme, where more than one vegetable that sheds water during cooking can render the pizza soggy. But taken as the quick-serve operation that it is, numerous visits prove it an opening we should unanimously celebrate. True: For those of us in Denver who’d love to dine regularly at the Frasca-born full-service pizzeria, Pizzeria Locale Denver will never be a twin to its Boulder sibling. This Sixth Avenue location was not designed to supplant the original. But it’s easily the best expression of the top-toque fast-casual craze that I’ve seen between the coasts, and we ought to feel lucky to have access to that right here at home.

Editor’s note: The similarities noted in this article between fast-casual outfits like Chipotle and Pizzeria Locale are no coincidence. As soon as the ink dried on this review, Lachlan Mackinnon-Patterson and Bobby Stuckey announced that Chipotle was a top-secret partner in Pizzeria Locale Denver from the beginning. Together with Chipotle CEO Steve Ells, Mackinnon-Patterson and Stuckey are currently shopping for at least two additional pizza locations in the metro area. We hope this team can maintain the same high quality that 5280 experienced at Pizzeria Locale’s flagship fast-casual spot as the outfit continues to explore what it calls “slow, measured expansion.” 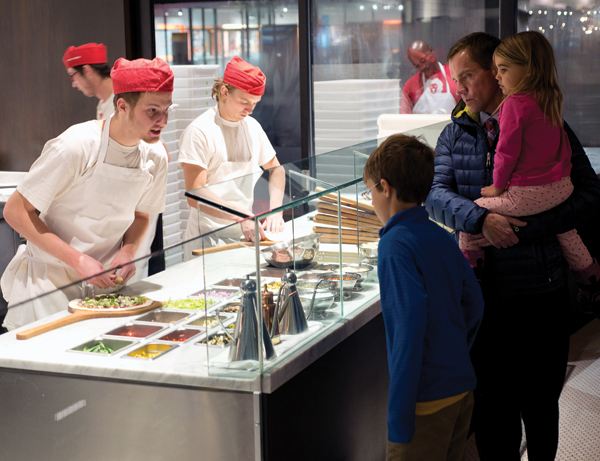