Beneath the twinkling lights of Larimer Square, it’s easy to forget that just a few decades ago, an evening in LoDo was anything but desirable. Today, the area is once again the epicenter of Denver’s next big transformation: an apartment building boom that seems to have left its mark on nearly every corner of downtown.

As of late last year, more than 70 apartment projects were under construction in the Denver metro area, about a third of which are located downtown. Across the seven-county metro area, about 10,000 new units will come on line in the next year or two—about half the total number of apartments added in the previous 10 years combined, says Mark Williams of the Apartment Association of Metro Denver. “We had a real dry spell of new development in metro Denver,” Williams says. “It was really difficult for a developer to get the right financing.”

That construction drought, coupled with growing demand for apartments in a rebounding post-recession economy, triggered a historically tight rental market. In 2013’s second quarter, the metro-area apartment vacancy rate hit an 18-year low of 4.2 percent, while rents reached record highs, about $1,050 per month on average.

Developers answered with the current flood of projects—the first wave of which opened late last year. Although Williams believes the demand will absorb the new units, others aren’t so sure. “We are rapidly reaching saturation for supply,” says David Zucker, a principal of Zocalo Community Development, which recently completed the 219-unit Cadence Union Station apartment building.

Either way, renters stand to benefit from the surge in supply. Both Zucker and Williams expect rent prices to level out. And Zucker believes that once demand catches up with the new supply within a few years, the result will be a more vibrant downtown, with retail development spurred by the growing residential population. “We’re going to be increasing the number of people living downtown by somewhere near a third,” he says. “Denver is going to be one of the great downtowns of North America.” 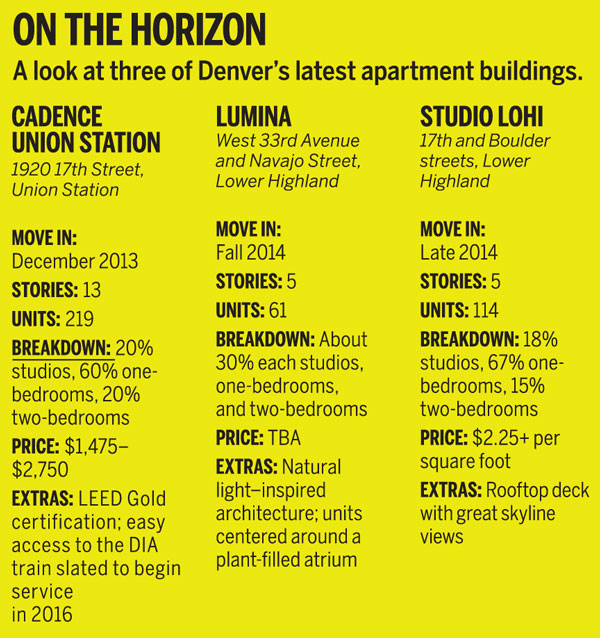