The most memorable thing about Skyler Weekes isn’t his six-foot-five-inch frame, his lanky arms, or the way his shoulders curve into his chest—all assets for this rock climber who’s logged more hours scrambling for handholds than he’ll probably ever spend in a suit. No, the most memorable thing about the 29-year-old is his hands. Weekes’ fingers, tipped by impossibly short fingernails, are so long it’s as if they’ve been stretched, their knuckles bulging like they’re straining to keep his joints intact.

He’s made two careers with those hands: First, he was a professional “dyno” climber. Short for “dynamic,” the sport’s athletes lunge, sans ropes or safety net, from one handhold to the next. (Weekes holds a Guinness World Record for a leap that spanned 9.3 feet.) His second gig is as the owner of the Rocky Mountain Barrel Company (RMBC), one of a dozen or so businesses in the United States that deal in used liquor barrels. Weekes’ barrel company is, well, rolling. Thanks to Colorado’s burgeoning craft beer industry and its insatiable thirst for barrel-aged brews, in 2013 RMBC grew nearly 500 percent from 2012.

Compared to his old pursuit, Weekes’ new one repurposing and “upcycling” wooden vessels for resale seems safe. Or it did until one October morning in 2011. Weekes was at his warehouse in northwest Denver using a chop saw to build a wooden wine rack when the saw hit a nail. The wood jerked his left hand into the blade, cutting through a joint and amputating all of one finger and most of another one. The torque was so intense it exploded the joint.

Weekes must have gone into shock, because at first he thought he could drive himself to the hospital. But by the time he got to his truck, he’d lost too much blood. He called 911, tied his hand to the truck with an old T-shirt to keep it elevated, and passed out. When the paramedics found him, he asked to be taken to the Presbyterian/St. Luke’s emergency room; he remembered the hospital had breakfast burritos he liked. After the surgeon reattached his fingers, everyone assumed Weekes’ climbing days were over. Everyone, that is, except Weekes.

Weekes first tried rock climbing at a Boy Scout camp, and when he headed to Boulder to study astronomy and physics at the University of Colorado in 2003, he found the sport had a more alluring pull than his classes. After his first year, he left school, moved to Estes Park, and worked as a line cook at night so he could spend his days on the rocks.

As much as he loved climbing, Weekes understood that he might get hurt, he would eventually get old, and he most likely would get bored. He needed real work, and so, as a plan B, he spent the next four years earning a culinary arts degree from the Art Institute of Colorado and two more certifications from the International Wine Guild.

But he never strayed far from boulders. Weekes entered climbing competitions around the world after discovering the ideal use for his massive hands: dynoing. A relatively new sport—the first Guinness World Records competition was in 2002—dyno grades climbers as they jump from one handhold to another, using their legs and cores to launch themselves. The force of the lunge pushes their bodies sideways and upward as their hands grab the wall, so climbers must then use their arms and cores to re-stabilize themselves. If they can’t control their bodies, their fingers can slip and they plummet to the ground, often headfirst.

Even the most experienced climbers fall. It happened to Weekes on June 4, 2005, during his first attempt at a world record. The 15-foot drop snapped his spine on impact and drove his left knee into his eye socket. He broke so many facial bones that his left eye hung where his nose is. Weekes underwent seven operations on his face. He was in a hard-shell back brace for six months, and doctors told him he’d never climb again.

Weekes listened to his doctors—and then ventured out on another walkabout, this one as much mental as physical. He started by pumping hand weights while lying on the couch. Eventually he was walking, then running—then climbing. On June 4, 2007, Weekes broke the world record he’d been striving for exactly two years earlier. He’s since surpassed it five more times. 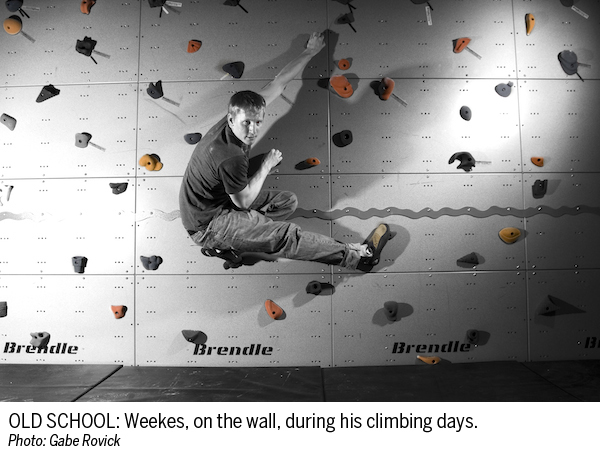 Even at the peak of his climbing career, Weekes’ prize money was barely enough to cover travel expenses, let alone his rent. There aren’t many full-time jobs for climbing bums—even ones as accomplished as he was—that would allow for working out four hours a day and traveling to competitions three months of the year.

Weekes knew he should be his own boss. He’d forged connections with Colorado wineries through his culinary studies, and sometimes he’d return to Denver with a few barrels. He began selling them on Craigslist. Eventually, he threw up a website, posted an ad, and received dozens of responses. People wanted the barrels for outside planters or to build upcycled furniture (wine racks, tables, sinks). And with most barrel-selling companies based in California or Kentucky, Denver seemed conveniently located in the middle.

Weekes first bought a trailer-load of barrels and stored them in his downtown apartment while he continued to climb. But the barrel business soon took over his life—literally. “I threw out all my furniture,” he says. “It was the definition of a dirtbag way to start a company.”

He moved his inventory first into a storage unit before finding a bigger warehouse space near the airport, and then another in northwest Denver. During this two-year stretch he ate a lot of ramen noodles and tried to figure out how to run a company. “I’d ask people what a P&L was,” Weekes says, “and they’d just laugh and say, ‘You have a business?’?”

But buying and reselling barrels for flowerpots and tables wasn’t exactly feeding Weekes’ need for speed, so he started importing barrels from around the world: containers that had been used to store Madeira from Portugal, rum from Jamaica, tequila from Mexico. There were setbacks, such as the time customs officials in Houston intercepted a shipment from Mexico—Weekes says all his shipments get delayed—to X-ray it for drugs. But when the power went out at the X-ray station, the agents cut open the barrels with chain saws, rendering them useless and costing Weekes about $5,000.

More recently, Weekes lost almost $17,000 when the dank air inside a shipping container sprouted a fungus outbreak. “Nine times out of 10 it works out,” he says. “I’ve been able to take my love for adrenaline, and instead of doing crazy things like dynoing, I say, ‘Let’s blow a hundred grand on customs and maybe it’ll get through—or not.’ I’ve transitioned it into my business plan.”

When Weekes first started selling barrels in late 2009, he was lucky to unload 10 a month. Then in 2010, owner Chad Yakobson from Crooked Stave Artisan Beer Project called. Weekes, not much of a beer drinker at the time, began to realize how many brewers wanted to dabble in barrel aging. But these small breweries usually needed just a few at a time. After Weekes saw a chance to position his company as a facilitator for the orders, microbreweries around the country began calling more frequently, and that average of 10 barrels sold per month now hovers around 300. Thanks in part to Weekes’ culinary training, he’s become the supplier of barrels for beer aging. He can poke his nose into an oak barrel and tell a brewer what flavor—chocolate, raspberry, smoke—they’re likely to get from the wood, and he’ll even make suggestions for breweries unaccustomed to working with, say, tequila barrels. (Jalapeño-infused saison, anyone?)

Crooked Stave is now Rocky Mountain Barrel Company’s neighbor in northwest Denver. “It’s been great watching as we’ve grown, and Skyler has grown right next to us,” says Yakobson, who’s seen Weekes’ barrels at breweries in Austin, Texas, and Portland, Oregon, and once drank a brew from a Weekes-supplied barrel in Alaska. “At this point, if there is something out there, he will be able to bring it.”

As RMBC expanded, Weekes hung up his climbing shoes, and his hand injury a short time later seemed to end his dyno days for good. It took him six months just to regain feeling in his fingers, but as the cut turned into the white scar that now spreads like a lightning bolt across his knuckles, the urge to climb returned.

This past December in the RMBC warehouse, barrels were stacked four wide and deep. (Weekes anticipates that wine and bourbon barrel prices will jump in 2014, and he wants plenty of inventory.) Although the barrels were blocking his custom-made climbing wall, he was quick to mention that it was set up to mimic his record-breaking jump.

When I asked why he has the wall if his climbing days are over, Weekes absently rubbed the knuckles on his recovering left hand. A good friend of his recently died of bone cancer, and Weekes thought that if he could raise a significant sum for cancer research, he’d dyno again. Maybe he’d make the attempt over water, or a net, but he’d force his hands to do it. He’d jump, and his fingers would grip like they used to.

As he outlined his plans, his speech quickened, his adrenaline rising as he anticipated the thrill of risking it all—again. “We’ll see if I go for one more time,” Weekes said.

Then his smile broadened. “Probably.”

After a pause, the truth finally came out: “More than likely.”

And when I checked in with him a short time later: “Definitely.”

Last year, Skyler Weekes decided to buy a few grapes and make some wine for his friends. But, as he often does, Weekes went big: He purchased two tons of California grapes and will package several hundred bottles in 2014. He’s using custom-toasted barrels from France and has named his new winery “Caelum,” which means “sky” in Latin. The only trouble? His next-door neighbor, Crooked Stave Artisan Beer Project, uses wild yeast from the genus “Brettanomyces” in its brews. Weekes says that the yeast floats around the two warehouses and could infiltrate and ruin the wine. The solution? Weekes’ wine barrels are safely zippered away in a little hazmatlike plastic storage closet that looks like something straight out of a Breaking Bad episode.