Aroma is your first clue that Michael Beary’s chile relleno is like nothing you’ve ever experienced—unless you’ve had the good fortune of sharing a Oaxacan abuela’s Easter feast. Rich yet bright and indescribably earthy, the dish’s fragrance turns diners’ heads as it emerges from the kitchen at Zocalito, Beary’s Aspen restaurant. His version features a long, plump “pasilla de Oaxaca”—a pepper that’s seldom available in the United States—bathed in a mole made with even more difficult-to-find ingredients: red, yellow, and black “chilhuacles.” Such chiles are rarer than truffles and just as heady. Indeed, Beary’s impassioned effort to bring them to this country probably ranks as Colorado’s most epic farm-to-table project ever. 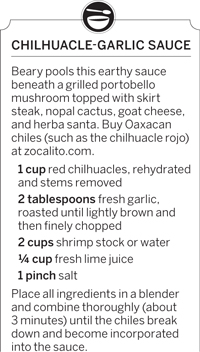 After 10 years as executive chef at Aspen’s Cache Cache, Beary opened Zocalito in 2000. Frustrated by the scarcity of authentic Oaxacan ingredients, he began making buying trips to the Mexican state. There, he discovered that fewer than 10 farmers still cultivate Oaxaca’s distinctive chiles, which develop their unique flavors from the soil and isolation (growing in Oaxaca’s most remote regions keeps these strains from cross-pollinating with Anaheims or other common varieties). A recent blight and torrential rains have made chile production more difficult than ever, and many producers have simply given up.

“Some varieties are on the verge of disappearing,” Beary says. Oaxaca’s “achilito,” for example, is so rare that its annual production totals at most 15 pounds. “Without these ingredients, you can’t even come close to what a Oaxacan grandmother would make. You can’t make mole with substitutes,” he says. Yet that’s what even Oaxacans do now. “People know the good mole has to be made with 100 percent of these chiles, but they’re so expensive that people use just a few, to give a taste of what it should be like,” Roberto Gavidia, a Oaxacan-based travel guide and translator, explains.

So Beary spent several years traveling to Oaxaca, meeting with growers, and helping them meet export standards. By promising farmers he’ll buy their chiles (when Oaxacans themselves can’t afford to do so), Beary provides the incentive they need to keep producing them. Yes, Zocalito’s food is thrilling in its flavors, but it does more than give Aspen foodies a fancy night out: It demonstrates just how far a chef’s influence can reach when he’s passionate about sourcing quality ingredients. “Mike has been talking to these people, convincing them to plant, not to stop,” says Gavidia. One bite of Beary’s chile relleno, and you’ll want to thank him, just like the Oaxacans do. zocalito.com