Growing up in bible belt Texas, Michelle Theall’s path was clear: Adhere to the teachings of the Catholic Church, do well in school, marry a nice man, and have kids. Instead, she fell in love with a woman, was subsequently disowned by her parents, and, in her 40s, abandoned the church for not recognizing her, her partner, and her child’s “alternative” lifestyle. 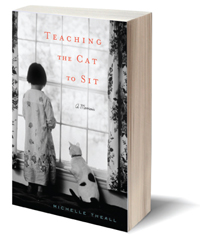 Last month, the Boulder writer released Teaching the Cat to Sit (Gallery Books, February), a memoir about her journey to self- and societal acceptance based partly on an essay she wrote for 5280 three years ago. “There’s something important in this story in terms of what you’re willing to risk to love yourself, shed your shame, and allow people to really know who you are,” Theall says. “It takes so much energy to be something that you’re not.”

Theall, 47, knows a thing or two about wasted energy. She hid much of her life from her family, including being sexually assaulted by a friend’s father at age 11 and, later, discovering that she is gay. Through unflinching prose, Theall returns to her youth and untangles the complexities of her life. She walks readers through her feelings of insecurity and loss with such sincerity that, were it not for the elegant writing, you might mistake the memoir for a diary.

It took a life-altering event for Theall to arrive at such clarity. In 2009, she was told her adopted son would be expelled from his Catholic school for having gay parents. Suddenly, Theall had to decide whether to continue hiding out or stand up for her new family—and run the risk of losing her parents forever. “I never intended to be a gay activist,” Theall says. “Things just happen to us in life that we don’t bring on ourselves.”

In Person Meet Theall during a reading at Tattered Cover Colfax Avenue on March 12 at 7:30 p.m.

5280.com Exclusive: Get to know Michelle Theall a little better with our online Q&A.