This upscale cocktail bar is perfect for a first (or 15th, or 50th) date. Tucked underneath its celebrated parent restaurant, Colt & Gray, Ste. Ellie has an upscale hotel lounge vibe. Although it’s a basement bar, it’s not overly dark. Which means you can get a good look at your balanced and beautiful cocktail—the focus of this sleek new space. Of course, Ste. Ellie’s also maintains a well-edited tap list with local brews from Avery and hits from popular out-of-state breweries such as Russian River. And if you’re still there when the dinner bell rings, make sure to pair a classic cocktail or brew with the unforgettable duck poutine. 1553 Platte St., 303-547-7356

When Seattle-based Matador announced it was moving into the former Heidi’s Brooklyn Deli space in Highlands Square—already home to Pinche Taqueria, El Camino, Chipotle, and Julia Blackbird’s—we couldn’t quite figure out what the Tex-Mex chain was hoping to add to the neighborhood. Now we know: a Day of the Dead–themed lounge for West Highland’s increasingly sophisticated set to see and be seen sipping tequila flights from the extensive lineup. (Once inside, you could be forgiven for thinking you’re in Cherry Creek.) Opt for the late-night happy hour—10 p.m. to 1 a.m.—and snag a coveted seat at the bar-height, iron-clad fire pit. 3496 W. 32nd Ave., 303-561-2855, matadordenver.com

You’re Drinking: A snifter of reposado; choose from 40 varieties

Visit the Monkey Barrel and you’ll feel like you’ve entered a time machine hardwired to 1995. There’s exposed brick and colorful, graffiti-style art on the walls, and the house playlist is flush with ’90s alternative gems. Even the name of the bar is a reference to Gen X’s beloved Donkey Kong. Order a pint from the exclusively Colorado taps, and head to the fourth booth on the right to battle your drinking buddy in the original Mario Kart. 1611 Platte St., 303-433-4646, monkeybarrelbar.com

Versatility helped elevate the original Atomic Cowboy to a Colfax institution, and the bar’s new location follows the same recipe. Before noon? Pull up to the bar and match a Lefthand Nitro Milk Stout Bloody Mary with a breakfast sandwich from Denver Biscuit Company’s on-site kitchen. Dinnertime? Order a slice of Fat Sully’s pizza; wash it down with an IPA. Late night? Once the sun goes down, the high-tops are perches for minglers until 2 a.m. 141 S. Broadway, 303-377-7900, atomiccowboy.net

You’re Drinking: One of 24 beers on draft—double the number of taps at the first AC 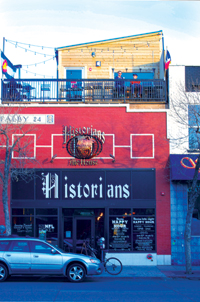 With an enviable rooftop patio, this pub is a welcome departure from the shadowy dives that dominate the area’s drinking scene. Cozy, high-backed wooden booths make the downstairs an ideal spot for a few rounds and a conversation; windowed garage doors and killer views keep the second-floor bar enticing year-round. And with a plethora of suds arranged by style on the ever-changing menu (and 5-, 10-, or 16-ounce pours available for everything), it’s easy to branch out and find your next favorite brew. 24 Broadway, 720-479-8505, historiansalehouse.com

You’re Drinking: A pint from Historians’ featured brewery of the month—Epic Brewing in March—which takes over five to 10 of the bar’s 40 taps