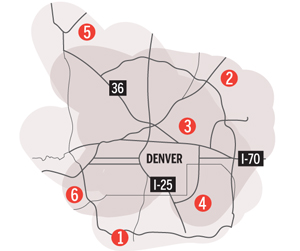 Each spring, millions of birds follow the mountains north from Central America and South America to their breeding grounds in the United States and Canada. Metro Denver is so perfectly positioned beneath this migration route (or “flyway”) that even a novice birdwatcher can spot unique feathered creatures—if she knows where to look. Wake up early—like, 5:30 a.m. early—find the binoculars and a field guide,* and head to any of these nearby birding superhighways for an avian adventure.

Skip the main attraction—the big lake—and head to the wetlands at the southwest edge of the park. Quiet paths (try the Wetlands Connector Trail) wind along the South Platte River, where birders can spot waterfowl, songbirds, and birds of prey such as the red-tailed hawk.

Within Reach: The Audubon Society of Greater Denver runs a bird-banding station in May, allowing visitors to see the songbirds up close.

More than 350 species have been spotted around Barr Lake, where a wide gravel trail follows the shoreline around the waterway for 8.8 miles, giving visitors sweeping views of nearby fields and plenty of spotting opportunities.

Native: Walk southwest toward the gazebo, and, if you’re lucky, you’ll see a bald eagle nesting across the lake.

Once a chemical weapons manufacturing site, this refuge now boasts 15,000 acres of habitats. Scan just below the treetops for yellow-rumped warblers, and look toward the fields for soaring swainson’s hawks.

This park isn’t just for cyclists and boaters: At Cherry Creek’s Wetlands Area, you can identify 173 winged water, woodland, and marsh species—such as the bright yellow western meadowlarks, whose melodious warbling provides a near-constant soundtrack.

These side-by-side sites northeast of Boulder have 4.8 miles of trails that travel around more than 10 ponds. Follow the unnamed trail around Cottonwood Marsh, where you can see colorful yellow-headed and red-winged blackbirds perched on reeds near the water’s edge.

Vantage Point: These ponds are also a good place to look for ospreys, which are large, fish-eating raptors.

You wouldn’t expect a concert venue to be a wildlife hot spot, but this is Colorado. Mornings at Red Rocks are filled with birdsongs, especially along the 1.4-mile Trading Post Trail loop, where you might catch prairie falcons, western scrub-jays, and canyon wrens waking up.

Eat Up: Feeders behind the Trading Post building attract ground birds by the dozens.

Spotted
Ten birds to look out for along the Front Range.

*We recommend Birds of Colorado by Stan Tekiela or the Sibley Field Guide to Birds of Western North America by David Allen Sibley.

Bird Guide from the Cornell Lab of Ornithology