Laughter is the best medicine.

Really? If we’re serious about it, we can all probably agree that laughter isn’t going to cure anyone of cancer or asthma or whatever else. But laughter can certainly lighten our mood and help us better cope with life’s tougher moments. At least, that’s what former Westword writer Joel Warner and Dr. Peter McGraw (pictured below, right), a University of Colorado Boulder professor and head of the Humor Research Lab, set out to determine. The pair traveled to five continents to learn the truth behind some burning questions: Why do we laugh? Can laughter really help us? What makes people funny?

This month, they released The Humor Code: A Global Search For What Makes Things Funny, an engaging look at the world of humor that’s part scientific experiment and part odd-couple road trip. As they search for answers, Warner and McGraw are forced to confront their own comedic abilities by testing their wit in stand-up comedy. Without giving away how those experiments turned out (I think you can guess), we caught up with Warner to find out what he learned about the world of humor.

5280: This book is obviously about humor. Did you feel pressure to make the book funny?

Joel Warner: A lot of people said, “If you write a book about humor, it has to be a funny book.” I knew if I set out to do that, we’d fail. I’m not a naturally comedic storyteller. I worked alongside Adam Cayton-Holland at Westword, and I saw the naturally comedic writing he did. I aimed to help us craft more of an entertaining book, not a laugh-out-loud funny book. 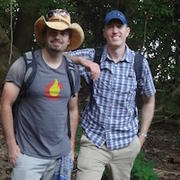 5280: The premise of The Humor Code is to prove or disprove Peter’s benign violation theory (BVT): “Humor occurs when and only when three conditions are satisfied: (1) a situation is a violation, (2) the situation is benign, and (3) both perceptions occur simultaneously.” After all the research you’ve done, do you believe in it?

It’s not as if I’ve become this disciple of the BVT. Having said that, we saw a lot of proof for it on the road. We saw a lot of examples of there needing to be violations in order for something to be funny. We went to Palestine, which is one giant violation, and most people would probably be amazed by the amount and kind of comedy we found there. This was very dry comedy based on the absurdity of their situation. At the same time, we saw lots of proof that the way to make things funny is to make them benign. In one of the poorest parts of the Amazon, we were able to succeed there, as white Americans walking into these slums, because we were wearing clown outfits—the universal symbol that we were benign. Am I a complete convert? No.

5280: A journalist sets out to write a book with a scientist… It sounds like the opening line of a joke. But in all seriousness: How did the partnership work?

We came up with certain questions we wanted to ask about humor: Why do we laugh? Is humor really the best medicine? Can you find humor in places filled with turmoil? Then we picked specific locations to explore to answer the questions, and we perused existing literature, experiments, and research. At the same time, Pete came up with additional experiments to run himself through the Humor Research Lab. The partnership worked really well. The biggest concern our literary agent had with the original book proposal was she wanted more tension between us.

5280: Where was the most interesting place you visited?

Probably the Amazon. We flew a Peruvian Air Force propeller cargo plane. We were strapped into the webbing in the cargo hold surrounded by 100 clowns. It was this Patch Adams expedition to these slums. We were both dreading it (the requirement was we had to clown ourselves). It ended up being this really challenging but wonderful experience for both of us. It really forced us to walk the talk and put ourselves out there more than we had. And it illustrated on of our main concepts: The science isn’t really there that laughter is the best medicine. It’s not going to cure heart disease or cancer. What we found—and what the science does show—is humor really can help with coping with both physical and mental hardships.

5280: What surprised you during your research?

For me, one of the surprises was going to Japan. We hung out at Japanese game shows and talked to comedians and just did not get their comedy. The surprising and encouraging thing is that after watching this completely perplexing Japanese game show, we went backstage with all these comedians. We couldn’t understand a word, but we laughed for an hour straight making rude hand gestures to each other. It was more primal, organic. Humor the world over is more different than alike.

5280: Do you have more respect for what comedians do after working on the book?

Yes. We tried to not focus purely on comedians doing stand-up but on the world beyond that. It’s easy for people to see it now as a pure business; it’s probably a good thing that people see comedy as a real career choice and that they can help spread new concepts through the guise of humor. In some ways you could call it propaganda. There’s a lot of really horrible humor out there, a lot of discriminatory, prejudiced humor. And a lot of people get away with it by saying, “Hey, it’s just a joke. Can’t you take a joke?” But then there are all these people that have turned it around and they’re using it as “laughdivism,” or a way to couch their protests. If a leader is threatened by some stupid gags making fun of him, he ends up looking stupid. That was fascinating [to see].

Clearly some people have an innate talent for it. But I think by us talking to these people, whether it’s New Yorker cartoonists or comedians—unfortunately there were a lot more men than women (one of the disappointments we had)—the common denominator is it’s a huge amount of work. In some ways, it’s science what these people are doing. They’re experimenting. Watch comedians working on new stuff: They’ll have a notebook with them or record the audience’s reaction. They take notes and tweak [their routines] for weeks and weeks or months and months or even years. Anyone can be funny. It helps to have a lot of material. It helps to step our of your comfort zone and think about things. But if you want to be professionally funny, you have to work at it.