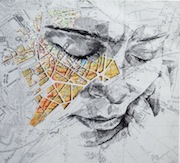 Maps may seem like another casualty of the Digital Age (though in Colorado their utility continues to be lauded by hikers, backpackers and hut trippers), but Welsh artist Ed Fairburn doesn’t see it that way. For him, land and people become one as he coaxes portraits out of the lines and contours on maps. Using only graphite or pen and ink (any color was already on the map when Fairburn found it), he sketches faces fraught with emotion, their curves and shadows crafted out of highways, rivers, and borders. The striking final products are so symbiotic it appears as though the maps were never really meant for providing directions—they were created to be the basis for Fairburn’s imagination.

The artist’s first U.S. exhibition features six original pieces (pictured above, right: Western Front III), including a new Colorado-inspired piece titled San Juan Mountains. They are all limited-edition prints and available for purchase. See the works up close when his show kicks off at LoDo’s Mike Wright Gallery tonight. Even better: Watch Fairburn at work in the gallery’s studio, where he’ll also discuss his process, on Saturday, April 26 from noon to 4 p.m.