Even before Mad Men triggered the current craze for midcentury design, Krisana Park was full of devotees. The southeast Denver neighborhood is an enclave of Joseph Eichler–inspired modern homes, many of them painstakingly refreshed with their vintage appeal intact. Matt Suskin’s property has all the elements that make these homes inherently cool—expansive glass and clean lines—plus an open-concept floor plan, a well-appointed outdoor living space, and nearly double the square footage of its peers. 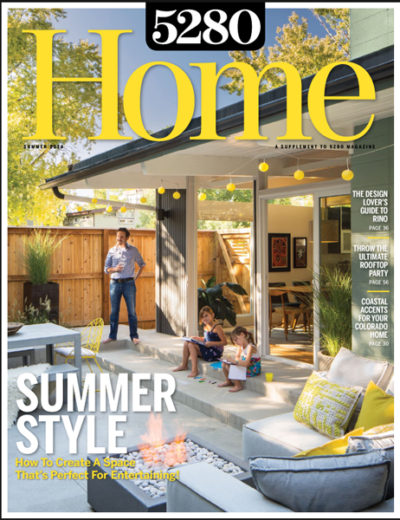 Suskin bought the home from real estate developer Michael McAtee of Denver-based McAtee Properties, who’d just completed a thorough but respectful gut redesign. Gone is the post-and-beam construction, along with most of the interior walls, in favor of a wide-open living area. The house got a sizeable addition circa 1970 that nearly doubled the original home’s 1,250 square feet. The addition now houses the bedrooms, while the original structure accommodates the public spaces. McAtee added a modern kitchen and turned a cramped staircase into an airy focal point, but the home’s overall aesthetic remains pure.

“The things that make midcentury houses special are the things that we kept: the floor-to-ceiling glass, the fireplace, the slatted wood ceiling, and the outer structure,” McAtee says. “Our goal was to create a good floor plan within that envelope and then update the finishes.”

Suskin was attracted to that open space filled with natural light (and just enough 1950s swank). He brought in the professionals to amplify the home’s mod vibe and to design a landscape befitting the home’s indoor/outdoor objective.

His guidelines for interior designer Megan Moore of Swiss Milk Studio were simple: “Matt is a music lover and has 150-plus concert posters, and he really wanted to highlight that collection,” Moore says. “He also wanted furnishings that suited the home’s aesthetic. As soon as I saw his rocking chair, a vintage piece with burnt orange upholstery, the design automatically went to this 1950s or 1960s rock ’n’ roll place,” she says.

Moore created a neutral palette with pops of saturated color to highlight the vibrant posters. She combined vintage furniture that Suskin had collected over the years from Craigslist and Denver’s Mod Livin’—including a Heywood Wakefield wishbone dining table and 1960s-era barstools—with new pieces from retailers such as Blu Dot, Room & Board, and West Elm. The attention-grabbing rocking chair in the living room plays well with equally vibrant Phish posters, while the dining area shows off the same colors in a more understated way.

Moore showed Suskin how to feature several posters in the stairwell, gallery-style. “We got inspiration from the walls of posters at the Fillmore Auditorium and at Sancho’s on Colfax, but Megan helped me keep it from looking like a bar,” Suskin says.

Although he doesn’t want his home to look like an entertainment venue, he does want it to function like one now and then—complete with live music and the occasional custom posters as party favors—so he hired landscape designer Ariel Gelman of Blu Design Group to help extend the entertaining space outdoors. Gelman designed a 500-square-foot terrace off the kitchen and living area, adding simple concrete pavers and angular steel planters and finishing the space with a dining area and a fire pit—a favorite spot for Suskin’s two kids to hang out on summer nights.

Like the house, the yard now has modern amenities that respect its history. “We’re faithful to midcentury modern design principles in terms of how you lay out the spaces, the materials you use, and the connection between indoor and outdoor,” Gelman says. “Concrete, an in-and-out traffic pattern, simple plantings, and honest materials—that’s what midcentury was about.” Don Draper would totally approve.