The Denver City Council approved $1.8 million in additional police funding Monday night to add cops to downtown beats, specifically on the 16th Street Mall, LoDo, and the Ballpark neighborhood. Denver Police Chief Robert White said the extra resources will beef up police presence and isn’t necessarily for arrests, but advocates for the city’s homeless say this opens the door to more police harassment of the homeless.

Councilwoman Robin Kneach said it’ll be pretty clear that the funding was a mistake if more homeless people end up with bench warrants, according to the Denver Post, but White assured the Council that the moves will increase safety. Time will tell if Kneach’s threshold comes into play, but for now we can look at the crimes that have been reported in that area for the first five months of 2014. 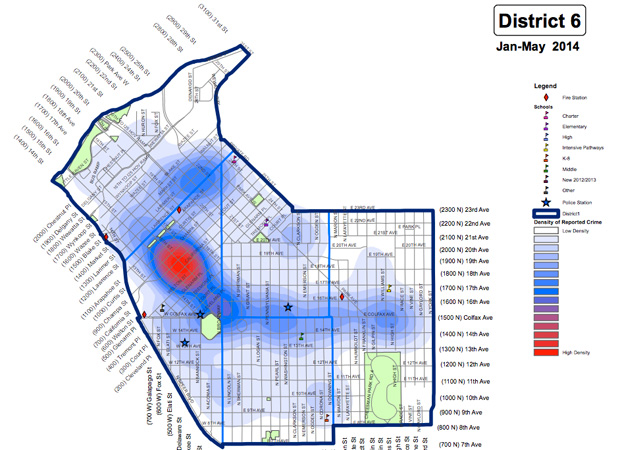 The map above, which shows crimes reported in Denver Police District 6, illustrates a concentration in activity from Welton to Champa streets along the 16th Street Mall. Another higher density area appears to be around 21st and Market streets. The crimes that are up the most in this district: stolen property, up 200 percent; disorderly conduct and disturbing the peace, up 840 percent; liquor law and drunkenness violations, up 700 percent; and criminal trespassing, up more than 520 percent.

Some caveats: These are reported crimes, not necessarily crimes that were proven in court. This data is provided by the Denver Police Department—the ones saying that their request for increased resources in this area is on the up and up, and not directed at homeless people.

So take the data for what it is. But as the funding comes through, and the police get their extra patrols in those areas, the data should reflect drops in those numbers without disproportionate impact on the homeless community. Otherwise, White will have some explaining to do.