“Iridescent Cloud” by Laura Haddad and Tom Drugan (2013)
This stainless-steel prismlike sculpture combines suspended “crystals” and glass-textured pavement.
Where: Outside plaza at the Denver Museum of Nature & Science
Nearby: Inside the museum, you’ll find the collection of gems and minerals that inspired the artwork—including an eight-pound piece of crystallized gold dug up in Breckenridge in 1887.

“Aerial” by John Davis (2007)
Davis pays homage to skateboard culture with his metal and concrete sculpture, which was inspired by the aerial stunts skaters perform nearby.
Where: Denver Skate Park
Nearby: Indulge your inner German with a patio seat and a stein of Pilsner at Prost Brewing.

“Laughing Escalator” by Jim Green (2004)
Ride the escalator to hear a variety of the 16 laughs sound artist Green recorded coming up through the steps.
Where: Colorado Convention Center main entrance
Nearby: More of Green’s sound installations await underfoot on the northwest side of Curtis Street (between 15th and 16th streets).

“Trade Deficit” by Joseph Riché (2009)
This stack is made of painted metal shipping containers that fit together in a very non-Tetris-like way.
Where: Broadway and Blake Street
Nearby: Meander into RiNo to visit a trio of businesses—Topo Designs (bags), Huckleberry Roasters (coffee), and Work & Class (food and drink)—that are all housed in recycled shipping containers.

“Fourteenth Street Overlay” by Walczak & Heiss (2013)
A collection of 23 optical devices (look for small telescopes and camera sculptures) offer historic images of Denver overlaid on the current scenes. For example, at 14th Street and Colfax Avenue, see what the Capitol Building would look like topped with the statue of Lady Justice originally planned for it.
Where: Along 14th Street between Colfax Avenue and Larimer Street
Nearby: Make the stroll part of date night as you head to Garner Galleria Theatre for You Say Tomato, I Say Shut Up! (opening September 19).

“Confluent People” by Emanuel Martinez (1999)
Denver’s beloved 10,000-square-foot mural represents our diverse population with portraits of three men peering at the city’s skyline.
Where: Little Raven and 15th streets
Nearby: Pick up a delightfully chewy double chocolate fudge cookie from the Dirty Cookie.

“Current³” by Virginia Folkestad (2009)
Activated by motion, this changing collage of projected images only comes on once the sun has gone down.
Where: Spread across the pedestrian bridge over Cherry Creek at 14th and Wynkoop streets
Nearby: Zip over to the Pepsi Center for a preseason Colorado Avalanche game (or the Elton John concert on September 20).

“Sunlight” by Adam Frank (2011)
This solar-powered light projection of the sun rising begins at dusk (Thursday through Saturday) and sets as the real sun rises.
Where: East facade of the Minoru Yasui Plaza
Nearby: Swing by the Belvedere for authentic Polish pierogi. 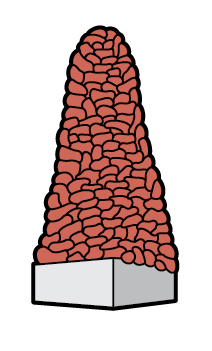 Part of the fun of viewing this abstract cast fiberglass sculpture is guessing what it is: a stack of kidney beans, perhaps?

Where: 16th Street pedestrian bridge over I-25

Nearby: Order anything off the ever-changing—yet always stellar—menu at subterranean bar Ste. Ellie.