It was a dinner party I hosted in Manhattan 14 years ago that cemented my lifelong obsession with Mexican food. I always have masa in my pantry; epazote grows among my herbs; and whether I’m eating in or out, I frequently turn to the colorful, flavorful canvas from south of the border. 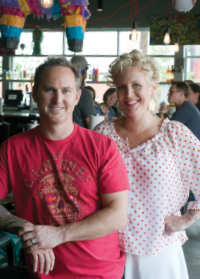 Naturally, when I first moved from New York City to Denver in 2007, beloved dives like El Taco de Mexico were some of my first food stops. I was also curious to see international restaurateur Richard Sandoval’s take on tableside guacamole at Tamayo. Since then, I’ve watched as a new breed of Mexican restaurant—the clublike taqueria—made its way to the center of the country.

From Petty Cash in West Hollywood to Empellón Taqueria in the West Village, taco joints of this ilk have been popping up on the coasts since, well, not long after that dinner party. The best of them have a commitment to ingredients and plate presentation that’s akin to the five-star kitchens from which some of the chefs hail, while menu prices have more in common with their street-cart forebears. The vibe at this class of Mexican eateries bridges that gap. Many are reminiscent of late-night clubs, speakeasies, or—in the case of Troy Guard’s Los Chingones here on Larimer Street—a Hamptons take on the surf shack. In a city that has long identified itself with Latin culture, some such taquerias go so far as to name themselves for words that are as profane as the lyrics in the hard-core rap they blare. The name Pinche, for example, means “fucking” (as in, fucking good tacos), and Los Chingones translates to “the badasses.”

While some shrugged when Guard, who is best known for TAG Restaurant on Larimer Square, decided to enter this already crowded stars-meet-street genre, he is, in many ways, the perfect man for the job. The Hawaii native spent the second half of his childhood living in Escondido, California, just 45 miles from the Mexico border. After a day of surfing or skateboarding, Guard remembers that he would “put down” a half-dozen grilled mahi tacos from a beachside joint in Cardiff. He and his buddies would hit Tijuana once a month for beef tongue, al pastor, or carne asada street tacos. The heavily tattooed chef’s first job in Denver was at Sandoval’s Tamayo. Plus, it’s in vogue right now for chefs-turned-restaurateurs, such as San Francisco’s Traci Des Jardins and New Orleans’ John Besh, to make taquerias their third, fourth, or fifth openings. (For Guard, the Ballpark taco temple was number five of seven.)

The Los Chingones space offers a noteworthy expression of the tony taqueria genre. Imported Día de los Muertos tiles decorate a wall near the bar. A massive, brightly colored mural was painted by a graffiti-inspired artist from Brooklyn. Reclaimed wood used throughout the space is hyperlocal: It was salvaged exclusively from the Ballpark neighborhood. Sleek, low-lying plastic orange chairs on the restaurant’s roof deck look like they were plucked from a museum of contemporary art. Meanwhile, humble cinder blocks—painted aqua—elevate two community tables. Above them, raw bulbs hang by red electrical wire from the exposed ceiling. Help-yourself rolls of coarse brown paper towel stand in for napkins. TVs above both bars show the game of the moment. Guests with baseball caps, puffy vests, T-shirts, and lavender hair drink concoctions such as the Beergarita (in which a mini Corona bottle is jammed, bottleneck down, in a frozen margarita goblet). 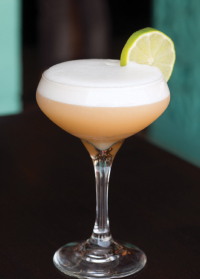 The menu is quintessential Guard, with classic Mexican ingredients often presented in unexpected ways. One of two guacamole offerings is loaded with spicy house-made chorizo and crunchy coriander-and-agave-pickled jalapeños. A white fish ceviche isn’t just “cooked” in lime juice but is also served with a grass green broth of cactus water. On the list of 13 tacos, a Wild Card option has rotated from python to camel to ostrich to an adobo chicken salad studded with micro-diced celery. The kitchen piles a mound of nachos with, among other expected toppings, chunks of crisped pig ear.

During my visits, I loved the thick, smoky and sweet guajillo salsa served with warm chips. From the bar, the Silk Pajamas margarita—made frothy from an egg white and served up—was so good I wished I could order it during every single visit. The braised beef tongue taco, served on a four-inch corn tortilla with cabbage slaw, was exceedingly tender with a nice roasted fire flavor from Guard’s three-chile tomatillo salsa. My fork kept darting across the table to a plate of deep-fried Brussels sprouts served simply with lime juice, pasilla chiles, and crumbled Cotija cheese. During one visit to the chef’s counter, I watched cooks pluck the burned ends of nacho chips off, wipe plates before they were sent out, and otherwise own their stations in the calm, collected manner of those who craft far more expensive fare.

But their efforts weren’t flawless. Los Chingones’ rooster salsa, a complimentary pico de gallo, was often made with flavorless tomatoes. Chipotle-spiced shrimp tacos and that white fish ceviche included a few overly fishy bites. Guard’s chorizo fundido arrived underseasoned. The hibiscus broth that pooled around an otherwise impressive thick-cut kampachi crudo was unnecessarily sweet. A “corn salad” was also a surprise; with heaps of romaine and only a negligible amount of corn, it reminded me of a taco salad you would settle for at an airport cafe. The majority of these flaws, however, were the kind of outnumbered moments my guests (who aren’t paid to take notes) had forgotten about weeks after.

What they didn’t forget, however, was the service at Los Chingones. While the hostess and a manager were routinely on their games, more often than not our servers and bartenders were inattentive and forgetful. One waitress went missing on several occasions throughout a meal rife with empty glasses and finished plates. Obtaining details from another server was awkward—she ultimately knew all of the ingredients in a dish I was asking about, but I had to ask a ridiculous number of questions to pull such information out of her. I had trouble getting a bill during two of three bar visits. 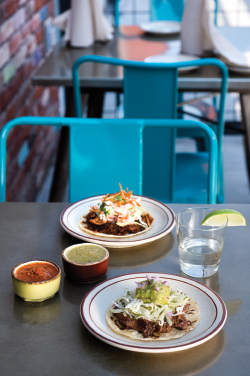 It was the dessert program at Los Chingones, however, that baffled me the most. In an effort to publicize another Guard establishment, Los Chingones only serves desserts from the adjacent dessert bar, Sugarmill, and only upon request. This means there are no desserts at all on Sunday nights, when Sugarmill is closed. Even when Noah French’s gorgeous sweets spot is open, creations such as a slender tasting plate of carrot cake cheesecake, a pistachio macaron, praline crème, and a chugable sea salt ice cream float—lovingly presented by the pastry chef himself—feel entirely out of place after a couple of enchiladas.

When I asked Guard about this and other shortcomings, one of the reasons he gave me was: “We wanted Los Chingones to be more of a hangout: ‘Let’s grab some tacos and a beer.’?” But as Alex Stupak’s dining rooms or Roy Choi’s street carts prove, Mexican eateries are now judged and—in the case of these two chefs—celebrated as critically as restaurants of a more formal era. Playing in a casual arena, especially one as followed as this category, cannot be an excuse for routinely distracted service and (pardon the pun) a half-baked dessert program.

Los Chingones could, for example, partner with Sugarmill (and still credit them for exposure) to create a small list of informal desserts. They don’t have to be the cliché flan or churros that Guard is understandably wary of. What about a Mexican chocolate whoopie pie with cinnamon cream, a trio of mole-inspired macarons, a single-serving Key lime pie, or—my dessert of choice at that storied dinner party—a mega-cut of tres leches cake big enough for everyone at the table? Any of these could be casual bites tailored to that limitless Mexican flavor palette so many of us love.

Like that feast at my loft 14 years ago, there is absolutely a party going on at Los Chingones. With tweaks to the dessert program and necessary service fixes, Guard could easily elevate the Los Chingones experience without over-elevating the vibe.

The Draw: Affordable, creative tacos in a space reminiscent of a new-era Hamptons surf shack.

The Drawback: Servers can be inattentive and components of the experience – such as the dessert – are underdeveloped.