Last september, while watching her first cyclocross race, Denver resident Jill Landman Alfond had an unexpected reaction. She fell in love. Alfond, 44, couldn’t take her eyes off the rowdy racecourse, which weaved a tight route through a field in Fort Collins. Hundreds of adrenalized cyclists lapped a hazardous circuit that at times forced them to dismount, pick up their knobby-tired road bikes, and jump over wooden barriers. Frenzied fans lined the gnarliest sections—such as the sand pit—to both cheer and jeer competitors, who, to Alfond’s surprise, often jeered right back. Then everyone ended up at the beer tent. “I was like, Oh my God, I have to try this,” she says.

A longtime recreational cyclist—and owner of Sugarlicious, a candy store in Cherry Creek North—Alfond bought a cyclocross bike and, 10 days later, entered her first local race: the eighth annual Boulder Cup, held at the Valmont Bike Park. She knew she wouldn’t be the only neophyte at the starting line, as cyclocross is the fastest-growing cycling discipline in the nation, with participation more than tripling in the past seven years. The sport fuses elements of road biking, mountain biking, and obstacle racing, but unlike other cycling events, race times are a short 30 to 60 minutes long, and the venues are compact—one- to two-mile circuits ideal for spectating. And spectators are, as Alfond quickly figured out, an integral aspect of the sport: a fact made plain by the regular inclusion of beer gardens and food trucks, both of which are optimal bait for cyclocross fans during peak racing season in the fall and winter.

Just hours before her race, Alfond threw up in the parking lot from nerves. At the starting line, she purposefully lined up at the back of the pack of women in her category, and she finished almost dead last. “I was awful,” she says with a laugh. “But it was the most exhilarating thing I’d ever done.”

The race in Boulder may have been Alfond’s first go at cyclocross, but the Bicycle Racing Association of Colorado (BRAC) says the number of ’cross competitors along the Front Range, particularly in Boulder, has increased even faster than the national average. During the 2013-2014 season, Boulder-area cyclocross races drew hundreds of competitors, along with thousands of cowbell-clanging, craft beer–guzzling fans—numbers comparable to Portland and Boston, the epicenters of the sport in the United States. And in January, the People’s Republic hosted the Super Bowl of cyclocross: the USA Cycling Cyclo-cross National Championships. That event alone saw 1,550 riders and more than 6,000 spectators, the largest turnout in the competition’s history.

The increasing legion of local racers includes everyone from twentysomething software engineers to middle-aged nurses to schoolchildren. “Women and juniors are actually our fastest-growing segments,” says Greg Keller, a lead coach for Boulder Junior Cycling, a volunteer-based youth cycling development program. “When we started the cyclocross program four years ago, there were 12 kids. This year there are 60.”

Given Boulder residents’ penchant for endurance sports, the rise of a pursuit like cyclocross in the area is not surprising. Here’s what is: The Front Range’s sunny, semiarid climate doesn’t provide the muddy conditions historically associated with cyclocross. In contrast, Belgium—regarded as the birthplace of the sport a century ago—is a citadel of lousy weather. American cities where cyclocross has the strongest hold serve up similarly nasty climates. The stereotype, therefore, has long been of a muscular athlete in cycling shorts—cold, wet, covered in mud—gritting it out on a filthy, muck-clogged bike. “It’s known as a hard man’s sport for good reason,” Keller says.

Weather-wise, the Front Range simply can’t compare. Cyclocross racers in Colorado will most likely never ride a lap with mud stuck in their front teeth. So how is cyclocross flourishing in Boulder? One theory is the quality—and uniqueness—of the racecourses. “When there’s no mud, you have to get more creative about adding some spice to the course,” says Pete Webber, a former pro cyclocross racer and full-time cycling coach in Boulder. “On the Front Range, race organizers try to outdo one another with how imaginative they get in terms of cool and fun features: staircases to run up, sand pits to run through, slippery off-camber turns where you end up on your butt half the time.”

And that’s really what it’s all about. Aaron Bouplon, BRAC’s executive director, says along the Front Range, good weather days—not sloppy ones—actually get a better turnout from both competitors and spectators. “Cyclocross riders want to go out and flog themselves on the course, but I’m not sure they care so much about the mud,” he says. Bouplon compares the joy of racing cyclocross to that of finishing a triathlon, for which competitors consider it a badge of honor to come into work on Monday so sore they can barely walk. And badges, at least according to cyclocross-crazy Coloradans, can be earned just as easily without all the mess. 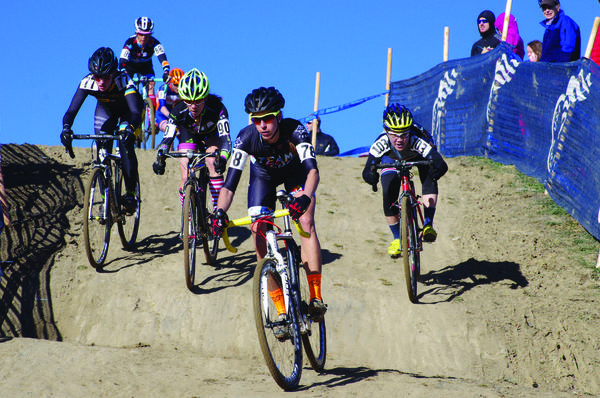 So is cyclocross the new triathlon? Not exactly, says Keller, who, in addition to coaching juniors, is in his 18th season of ’cross racing. “Cyclocross is entirely different from any other type of racing,” he says. “It’s like a party. And the party happens every six minutes when you, or the friend you’re watching, zoom by to start the next lap.”

Compared to triathlons—one of our state’s most revered endurance pursuits—cyclocross is more affordable (about $30 per race), requires less time and training commitment, and offers a more close-knit community. Cyclocross competitors get to know one another, along with their respective friends and families, because the venues are so compact and spectator-friendly and because the races are so frequent. In Colorado, cyclocross races—all of which are sanctioned by the BRAC and listed at coloradocycling.org—happen both days of every weekend from September through January. On Wednesday evenings in September and October, a practice race series held in Golden gives veterans and new racers alike a friendly forum to test their mettle. “You make great friends whom you see every weekend,” Webber says.

And the potential for new friends is enormous, as cyclocross tends to be an inclusive sport. Anyone can enter a cyclocross race as a Category 4 (for women’s) or Category 5 (for men’s), the entry-level groupings for bike racing in Colorado. Besides paying the entry fee, each participant must purchase a $15 racing license from USA Cycling, which is available at races or at usacycling.org (annual passes cost $70). And although cyclocross bikes are preferred, first-timers who show up on mountain bikes and line up at the back of the starting pack are welcomed like veterans.

A typical cyclocross event starts at 8 a.m. and lasts until 4 or 5 p.m., with more than a dozen different amateur categories competing throughout the day. Races are broken out by gender, experience level, and age. The elite race (also called the open race) always caps off the day, with pro women competing for 40 to 45 minutes followed by the pro men for 60 minutes. While the majority of amateurs in Colorado’s ’cross races are locals, pro athletes may be from other states and are often competing for hundreds, and sometimes thousands, of dollars in cash prizes.

By the time the pros take to the course, the crowd has swelled to include not only fans, but also most of the amateur racers who’ve been competing all day. The beer flows freely. Cowbells clang. There’s an “I worked out hard and now I’m going to chill out even harder” euphoria in the air. Says Alfond: “It’s just about the most fun you can have as a grown-up.”