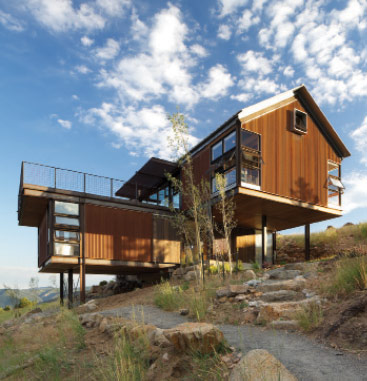 Two things strike you about the Sunshine Canyon property where architect Renée del Gaudio lives with her family: First, there is the lunarlike landscape where earth and sky meld and twiglike aspen trees bend 90 degrees in the wind. Then, there is the modern interpretation of a classic mining-era, pitched-roof house, wrapped in glass and rusted steel, that gently hovers above the steeply sloped site.

When del Gaudio and her husband, Ross Wehner (founder of World Leadership School), bought the four-acre alpine property five miles west of Boulder in 2009, they didn’t have a long-term plan for how they would use it, but they knew they shared a strong connection to the place. Captivated with the West, del Gaudio moved to Boulder after college at the University of Michigan. “I would hike and watch sunsets with friends in the canyon, and Ross spent time rock climbing in the area,” del Gaudio says. After graduate school and a yearlong sojourn together in Peru writing a travel guidebook, the couple returned to Colorado and settled near Denver’s City Park. 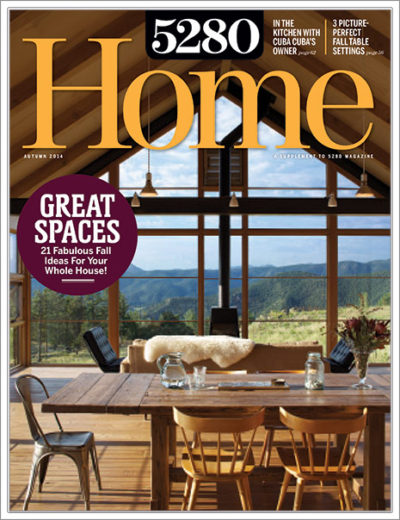 The rugged site they owned in Sunshine Canyon became a beloved destination for the outdoorsy pair to introduce their two young children to nature. Weekends were spent exploring the densely forested land and casually mapping out the best views if they ever decided to build. A prominent granite outcropping became a favorite family gathering point from which to survey the land.

That vantage point changed forever on a hot, gusty day in September 2010. While driving home from a camping trip, the family got word that the Fourmile Canyon Fire had ravaged their land. “It looked apocalyptic,” Wehner says of the post-fire landscape. “Of the 800 trees on the site, maybe only 10 percent remained.”

Devastated by the loss of the forest and a tiny cabin on the land, del Gaudio and Wehner quickly turned to restoring the native vegetation. “Spending time repairing the soil was therapeutic. It also allowed us to see the property in a whole new light,” del Gaudio says. As they raked away the waxy, ashen layers and cleared the charred trees, an unanticipated landscape revealed itself—one filled with panoramic views and a treeless terrain reminiscent of the turn of the century when mining was the dominant industry. “The fire reset the clock on the landscape,” says Wehner, who, along with del Gaudio, is an aficionado of regional history. 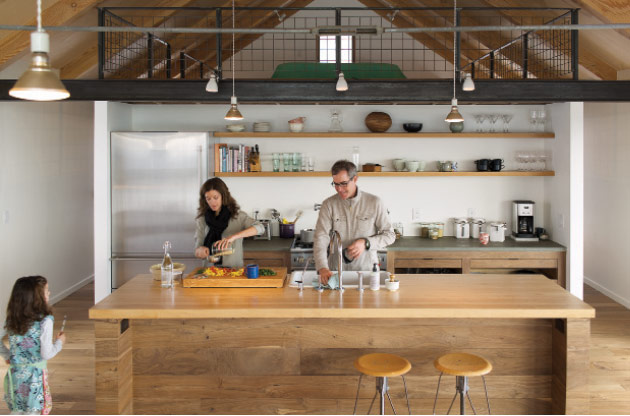 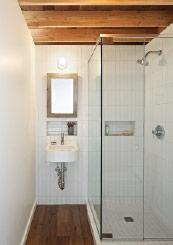 For del Gaudio, who has devoted her career to creating architecture that is reflective of its place and time, the newly exposed landscape was inspiring. “It started to give me a sense of meaning—if you put a house here, what would be appropriate and how could I tie it to the history of the area?”

Borrowing from the architectural imagery of mining structures from the past, del Gaudio selected straightforward forms and materials for the exterior of the family’s new permanent home, including naturally rusting Cor-Ten steel siding and metal roofing. Both require minimal maintenance and are also fire resistant. The home has few openings to the west to block harsh prevailing winds. Large glass expanses to the south and east capture striking views and flood the interior with natural light. With solar panels and a wood-fired stove, typical electrical bills run only $9 per month for the 2,760-square-foot house.

The interior of the home is reduced to similar essentials but exudes the warmth and intimacy of a treasured family cabin. “I wanted every space to have a real purpose,” says del Gaudio of the overlapping functions, including kitchen, dining, and living rooms on the main level. “There is not a single inch of wasted space. For me it was about a very open floor plan, where everyone can be together.” Private spaces, including the children’s bedrooms, are literally tucked into the hillside on the lower level to provide a strong sense of shelter. A steel staircase with wood treads connects the floors like a ship’s ladder.

While the favorite granite outcropping was poetically repurposed as part of the home’s structural foundation, the family still gathers on an exposed corner of it to ponder their next hilltop adventure—though it’s hard to imagine ever leaving a place so attuned to its surroundings.