When Lower48 Kitchen, a contemporary restaurant inspired by the food traditions of the contiguous states, opened this past December at 21st and Lawrence streets, it was all anyone in Denver’s food world could talk about. And for good reason: The combined resumé of restaurateur and co-owner Mario Nocifera and chef and co-owner Alex Figura is indeed noteworthy. Nocifera honed his hospitality skills in the dining rooms of Palo Alto’s Spago, the Ritz-Carlton and Charles Nob Hill in San Francisco, and Aspen’s the Little Nell. Figura has manned the burners at Philadelphia’s Vetri Ristorante, Spain’s El Celler de Can Roca, and Blue Hill at Stone Barns in upstate New York. The men met in 2010 while working at Boulder’s Frasca Food and Wine.

From the moment diners walk through Lower48’s front door, they feel the attention to detail that comes from such accomplished professionals. Elements of the decor subtly hark back to the days of the hardworking gold miners and laborers who personified the American Dream. From behind a hostess stand draped with U.S. Mint coin sacks, the Lower48 staff universally greeted me with sincere enthusiasm. Servers jumped aside with hellos of their own as my companions and I walked past a communal table made of reclaimed mahogany from an antique boxcar to our modern, red aluminum chairs. One waitress reached into the pocket of her black railroad-striped apron to relight our candle before we’d even noticed it was out. Employees promptly poured water from Le Creuset pitchers, folded our napkins while we were in the restroom, and methodically replaced flatware between courses.

Even service snafus were turned into opportunities. One evening, my girlfriend and I received an entrée of Neah Bay black cod instead of the quail dish we’d ordered. Not only did the kitchen quickly make the correct plate—which included a glazed quail lollipop served with romesco, green garlic, and freekeh (a Middle Eastern wheat)—our waitress presented a modest gift card with our bill, suggesting we come back and try the cod next time. 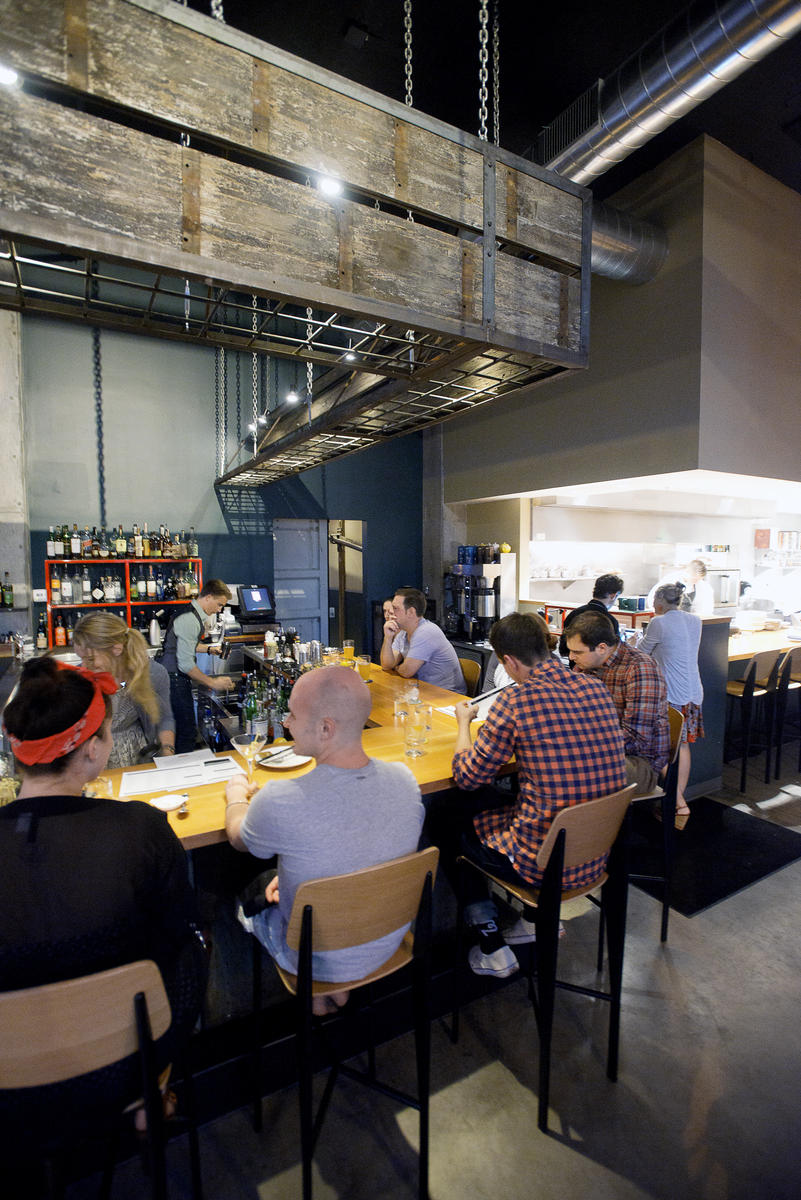 During another visit, a bartender spotted two of his customers impatiently eyeing the dining room to see if their table was ready. He stopped what he was doing and checked in with the host for them. Later that night, after he told me the boquerones that came with a summer squash salad were sardines, he quickly returned to say they were actually small anchovies. Humbly choosing to correct himself was more impressive to me than if he had recited an accurate answer to begin with. On another night when the restaurant ran out of two types of beer, the bar manager came over, apologized, and suggested we share a rare bottle that a friend had given him. One of the most important lessons that comes with Nocifera’s professional pedigree is the value he places on empowering every employee to do whatever it takes to make sure Lower48 guests leave happy.

Nocifera also makes sure seemingly every staff member touches each guest’s table. “It is extremely important that everyone in the restaurant is cross-trained and that everyone participates in service,” Nocifera later told me. During my visits, the owner himself, the assistant general manager, the head bartender, servers, and the expediter all approached tables. On one occasion, the pastry chef presented her own dessert of a tender-crumbed lemon poppy seed cake with rosemary oil emulsion, gently torched meringue, dots of lemon gel, and a refreshing house-made lemon sherbet.

From a menu that includes elevated takes on regional American classics (tarragon-filled beignets; petite, subtly sweet corn dogs; gorgeously smoky, inch-thick slices of a 36-ounce dry-aged rib-eye), employees were most often able to describe ingredient details and preparation techniques without hesitation. Trips back to the kitchen were not needed to inform us that the diced offal that flavored the buckwheat in a duck dish was heart, or that a cured egg shaved over house-made spelt tagliatelle was brined in water, salt, and sugar, then hung in cheesecloth to dry. 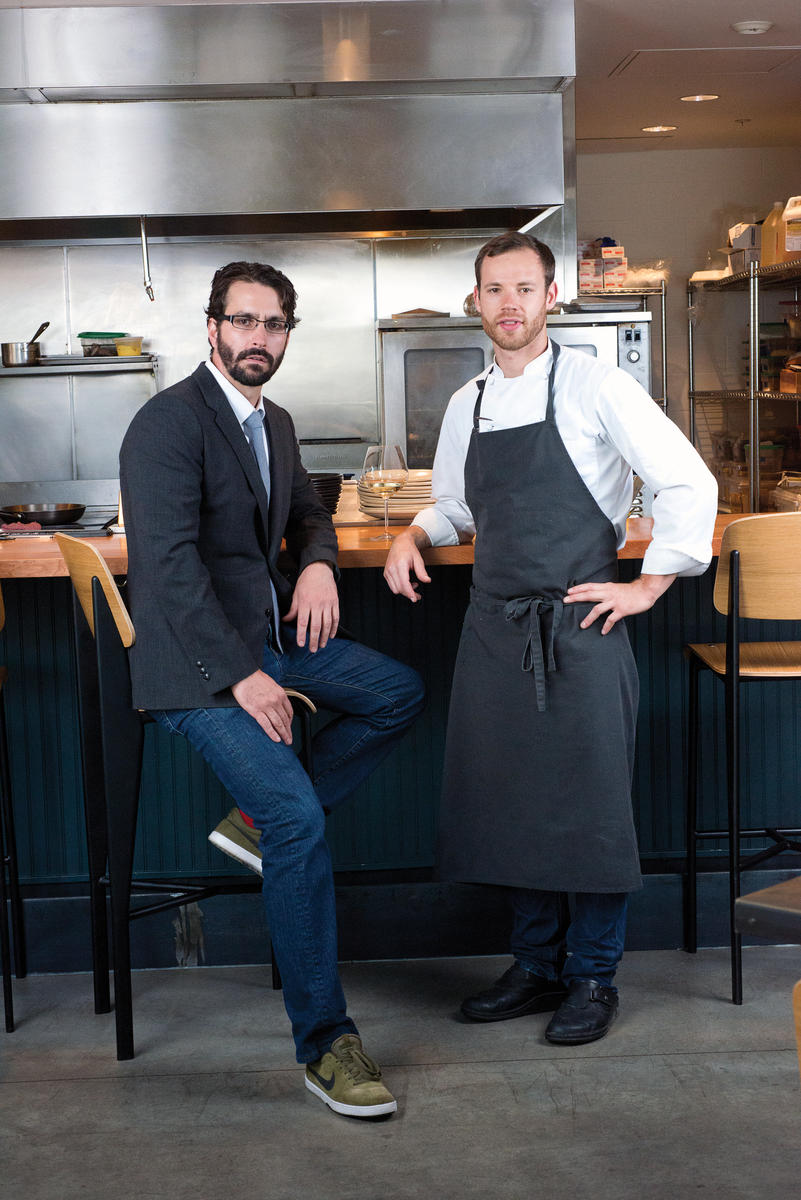 For all their knowledge, however, the staff at Lower48 needs to be careful that the confidence with which they describe things doesn’t tip toward arrogance. One waitress should have checked her notebook instead of telling us that freekeh is from Germany. Another employee astutely asked if he could remove my empty cocktail glass, but he called it a martini with an air of bravado I might not have noticed had it not been a gimlet. During a double date, a manager removed our bottle of 2010 Tempranillo with a splash of wine still left. When we gave him a funny look, he explained that he was concerned about sediment. It was a fair point, but he was clearly miffed about having to justify things as he brusquely dumped the (sediment-free) wine that remained into my companion’s glass. In spite of infrequent moments like these, Nocifera has already struck service gold—but he needs to make sure that his resources are properly invested.

The kitchen at Lower48 is also rich. In an impromptu meeting I witnessed one night while sitting at the chef’s counter, Nocifera and Figura went over the menu, which changes at least three times a week (the date is stamped in red ink). When their farmer’s radishes went to seed during a heat wave, they pickled the pods. A dish of once-humble potatoes was re-imagined with shallot scapes, pickled ramps, a potato mousse, and spinach blooms. The kitchen made five-day pickled strawberries for one cocktail and mixed a fermented carrot soda known as “carrot fly” for another.

From the menu’s one-bite “Each” section, a chip of dehydrated celery root (set atop shiitake mushrooms diced more finely than I thought was possible) looked like a piece of fan coral swaying on a sun-streaked reef. The tender spelt tagliatelle—tossed with so much flavor from garlic scapes, asparagus, a lustrous anchovy sauce, and those salty shavings of cured egg—was an approachable, comforting yet surprising meal I’ve routinely craved in the weeks since I first tasted it. 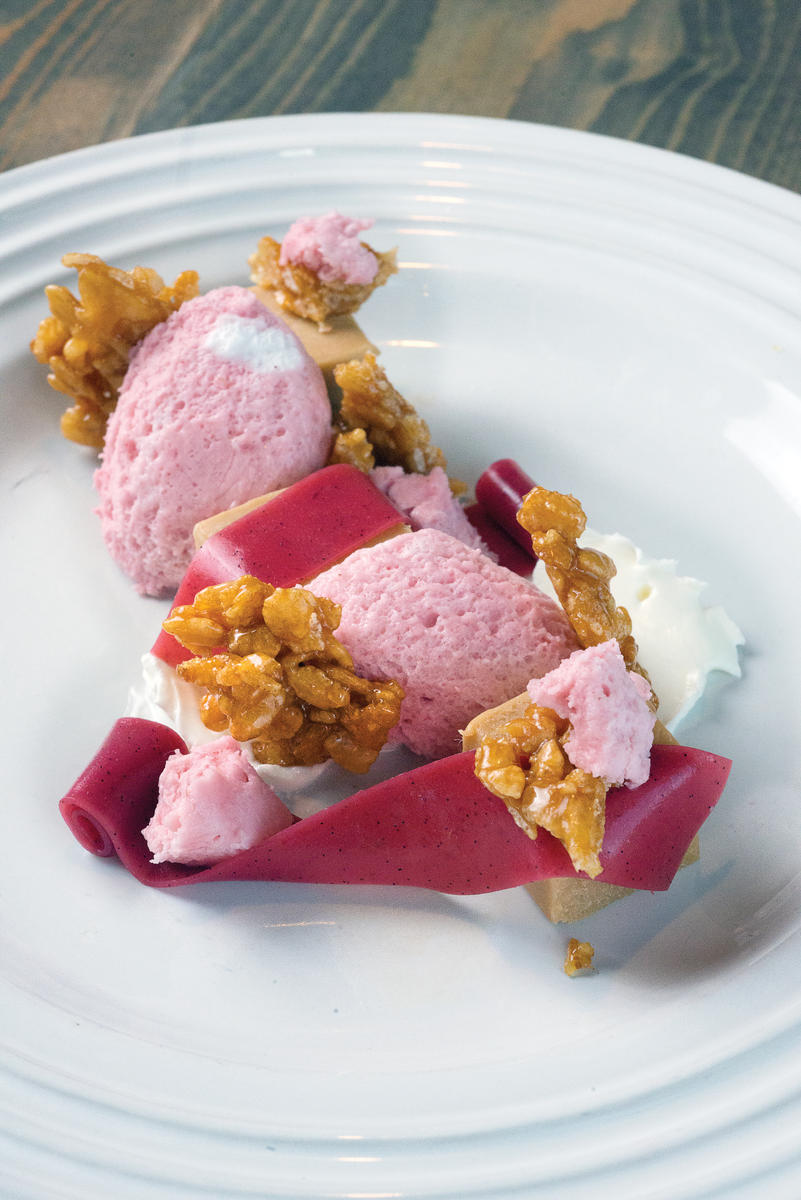 The salads and vegetable dishes at Lower48 showcase one of Figura’s greatest strengths—a meticulous attention to detail. Along with stints at Frasca and that three-Michelin-star restaurant in Spain, Figura worked the vegetable station at Dan Barber’s famed Blue Hill at Stone Barns, which is located on an 80-acre working farm that was once a Rockefeller estate. At Lower48, Figura serves some of the most luminescent, artfully plated vegetable dishes I’ve ever had. During my first meal there, a salad of warm, seared baby romaine came adorned with a custard of house-made brioche, a minty green goddess purée, and translucent coins of celeriac. The chef plated that salad of grilled summer squash with ribbons, spears, and bias-cut chunks of at least three different varietals of the vegetable, all served atop a grass green bagna cauda (a classic warm Italian dipping sauce) with equally vibrant wedges of a tart, Mandarinquat (a kumquat-Mandarin hybrid). A few plates into a meal at Lower48, I had long forgotten about any references to the regional American cookery of our ancestors—this is gorgeous, precious, modern-day food. So precious, in fact, that you expect perfection. The decision to produce such food might just be Figura’s biggest handicap.

While his food got more and more consistent over a three-month dining stint at Lower48, an early octopus dish was adorned with yellowing and flavorless arugula. It was far too difficult to get a cold piece of quail off its bone. Seeded sourdough croutons were so hard I was concerned about my teeth. A starter of chilled romaine soup tasted more like a juice cleanse. Many of Figura’s dishes were best only after we’d made a mess of our plates, deconstructing them to pick up extra seasoning from the pistachio butter or the beet and bottarga creams that flanked the headline ingredient. And there were moments when mostly showstopping desserts were overthought. A cherry mousse included chunks of dark chocolate brownie. While the cakelike texture was welcome, the chocolate overwhelmed the delicate flavors of the sour cherry and almond ice cream.

In a phone call, the 30-year-old chef, who offers everything from pork sliders to some of the most beautiful salads between the coasts, admitted to me that he was still struggling to find a label for his food. It was this kind of pleasantly candid and humble admission that reinforced Figura’s full potential. Despite his impressive resumé, this is the first time Figura has been an executive chef. It is the first time Nocifera’s bar manager has overseen a bar program. Lower48’s pastry chef has never before held her current title. Much like the 19th-century platelayers, soldiers, or forty-niners that Lower48’s subtle dining room artifacts remind us of, these are young, impassioned people—with great experience being applied to an entirely new venture. If this team can draw upon the assiduous work ethic of our forebears and stay the course, the restaurant will significantly impact Denver’s modern-day culinary story. Indeed, Lower48 is one of the few Denver restaurants with the potential to strike five-star gold.