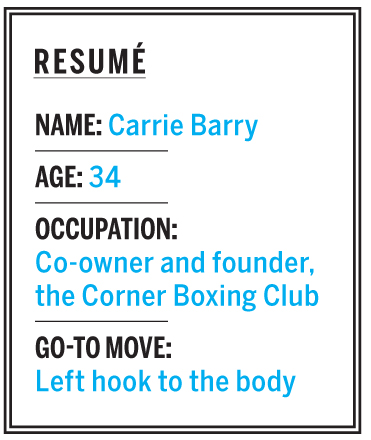 In 2011, Boulder’s Carrie Barry was training in Colorado Springs to be one of three female boxers representing the United States at the London Olympic Games. A freak knee injury KO’d the former U.S. Army reservist’s hope of grabbing an Olympic spot and sent her on a different career path: coach and mentor. In June, Barry and her wife, Kirsten, opened the Corner Boxing Club in Boulder, a training facility for both recreational and competitive fighters—with a soft spot for at-risk youth. We joined Barry in the ring to talk about her love of boxing, mentorship in Boulder, and why the Corner Gym isn’t just about learning how to throw punches.

How did you discover boxing?

My senior year of high school, I tore my ACL. I was going on to play college softball on a full-ride scholarship, so I used boxing as part of my rehab because all of the demands carry over to any sport: power, hand-eye coordination, balance, footwork.

Tell us about the injury that ended your Olympic dream.

I was in a training bout in the Springs, and I was beating her pretty handily. Heading into the fourth round, my coach told me to do whatever I wanted to because it was my bout. I did what we call a rock-step. It’s a simple move—shifting body weight onto the back foot to avoid a punch—that I’d done a thousand times. But, I tore my other ACL. That was my last bout.

What helped you get over the disappointment of your career ending?

When I tore my ACL I was upset, but our team physician was there immediately to take care of me. She was going through her second round of chemotherapy for breast cancer. Boxing in the Olympics had been my dream, and I wasn’t going to accomplish it, but I still had my whole life, and I would heal. She was going through a life-threatening illness, and she was there, taking care of me. Her toughness put everything in perspective.

What’s behind the name of your gym, the Corner Boxing Club?

The corner of a boxing ring is a place where the boxer gets support, rejuvenation, and trust. It’s always a place to come back to whether you have a great round or not. I wanted to create a place where you can get all of that.

In every class, athletes get paired up with partners. What’s the purpose of that?

This is what the sport is about. Everyone thinks it is me versus them. But we really rely on one another. You may only see one athlete in the ring, but there are so many people behind that athlete. From the beginning, we want our athletes to help take responsibility for someone else’s success.

Your members include youth from the Boulder Valley’s Family Learning Center and Justice High School. What drew you to make these at-risk kids part of your community?

5280.com Exclusive: Read our extended interview with Barry below.

When did you choose boxing over all of your other sports?

As soon as I found out I could compete when I was a college sophomore. It was relatively new because it wasn’t until 1992 that amateurs had the opportunity to compete. It wasn’t until 2001 that there was a world championship.

But, you still helped out with Team USA, right?

I ended up being Queen Underwood’s training partner. I also got to coach Alex Love at the 2012 trails. I was her corner coach. That’s when I began shifting point from being an athlete to a coach.

Do the what-ifs ever creep up when it comes to coaching instead of competing?

Of course I had my moments, I still do. But, I know what it takes to fight. You have to be really self-absorbed and selfish. To be a top athlete, this is all you can focus on. I don’t want to do that again. But, when I look at the London poster it kills me a little bit that I’m not on it. At the same time, I wouldn’t have my own gym if I were on that poster. I’d be on a different path.

What makes the Corner different than other clubs?

It comes down to me, my background. My background in sports rehab and performance are in my toolbox to help people learn. I can breakdown movements biomechanically. I can recognize the different ways people need to be coached, so I don’t have to coach everybody the same way.

Why keep the Corner’s headquarters in Boulder?

Granted Denver is a bigger market, but I have a strong community network in Boulder. There is a strong attitude toward startups and everything local here. Then I have my Justice High and Family Learning Center kids. If I were to leave, I would basically be abandoning the whole reason I wanted to start this.

What is the dynamic of you running the club and training male clients?

I get a lot of respect from anyone who comes in here. Anyone who has any doubts just wouldn’t come. All of my experience has been positive with all of our male athletes. Any doubts or negative would be my own self perceptions that they won’t buy into my coaching because I am a female. It doesn’t come from them.

If you’ve got non-boxers who want to use the club to train, how do you explain the effects it will have on their bodies.

I explain it based on their background and experiences. If it is a cyclist, I might explain the benefit of getting upright, using more thoracic mobility, and being able to breathe better. That way when they go to the bike, they’ll feel better. I look at where that person’s background is and what movement language they speak then I connect the dots to boxing.

Getting punched in the head and the ribs hardly seems safe, but it is. How do you convince people boxing is not violent?

You can’t make people understand. I give hard scientific examples. Amateur boxing per participant is behind 70 spots behind other sports on the list of injuries. We are way down the list of head injuries behind soccer, football, hockey, and others. Everybody’s responsibility ringside is the safety of the athlete.