It’s so earsplittingly loud in Work & Class, the Ballpark hot spot that opened in repurposed shipping containers in January, that you often have no idea what your server is saying. Like the time I think I was told, but only understood long after, that the liquid accompanying a goat dish was a consommé to be sipped between bites, not a glaze or a dunking sauce. Nor was it, as a neighboring diner decided, an unsolvable mystery to be avoided altogether for fear of “doing it wrong.” Like us, he had given up on trying to hear.

On many nights, parking is nonexistent. And like those overworked street meters, slammed servers—who are otherwise perfectly fluent and jovial (when you can hear)—can take a bit too long to greet your table. Or notice your beer glass is empty. Or clear a long-since-devoured plate. Or realize you can’t start tasting your food until you locate a fork. Often, they even ask you to keep utensils for your next course.

The petite restaurant on north Larimer is run by impassioned professionals who knew exactly what they wished to create long before they served their first practice meal. And while their laser-focused vision might not be for everyone, the infectious crowds at Work & Class prove the concept is a draw for plenty. “We wanted a place that was reflective of our working-class roots,” co-owner Delores Tronco says. Tronco, whose grandparents left school after third and fifth grades, calls herself “equal parts Italian immigrant and Nebraska farm stock.” Her business partner and boyfriend, Tony Maciag, was the youngest of eight children who grew up in a three-bedroom house in suburban Detroit. Chef and partner Dana Rodriguez was raised on a bean, corn, chard, and cilantro farm in north-central Mexico that lacked running water and electricity. Without deep pockets or a family purse, the first-time owners signed Tronco’s house over to the bank to open their dream restaurant. According to Tronco, they are on pace to get that house back far ahead of schedule.

Drawing on their collective work experience at Panzano, Rioja, Bistro Vendôme, Euclid Hall, Steuben’s Food Service, and the Justice League of Street Food, this impressive trio created a spot made up of striking juxtapositions. Rodriguez’s food is inexpensive, but completely satisfying. The space is informal, yet meticulously crafted. Work & Class’ owners are the first to unapologetically admit this is not fine dining; they never set out to open a five-star restaurant.

The concept is deliberately dressed down. The five cocktails on the menu are a simple 2:3 ratio of house-made mix to booze. No tinctures. No fermented garnish. No hand-chipped ice. Lovers of Old World wines won’t find a single bottle from across any ocean here.

“We were looking to create a small but intimate and approachable restaurant that had an industrial, gritty feel but never felt cold,” Tronco says. Her hostess stand is made from a factory conveyor belt found in a salvage yard. Above it hang four light boxes with pieces of laser-cut orange particleboard that slip into place to create different messages. They (quite accurately) read “Now Serving Good Beer” on one of my many visits. Rotisserie, braised, and slow-roasted meats, which come in quarter-, half-, or one-pound servings, are priced in 75-cent denominations ($7.75, $13.75, or $22.75, respectively, for the coriander-roasted Colorado lamb) because they liked how the numbers looked in print. Food arrives on metal pie plates. Checks are delivered in etched bill holders that say “Peace Out” or another message that ends the meal with an intentional dose of levity. 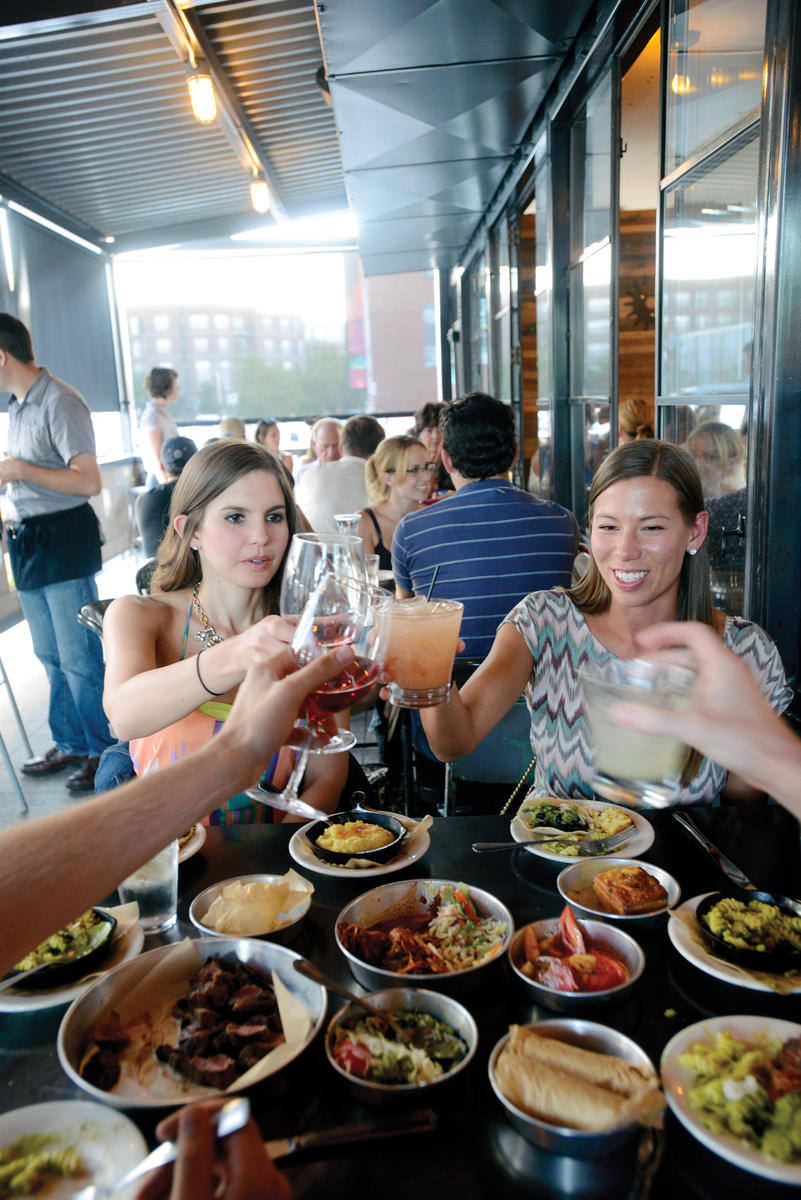 The Work & Class menu—which is a blend of Latin flavors and Southern comfort food, laid out in the build-your-own format of a barbecue joint—is equally well-conceived. Before opening Work & Class, Rodriguez cooked under James Beard Award–winner Jennifer Jasinski for 16 years. This background is apparent in dishes such as that goat and consommé. During my first visit, huge pieces of Colorado-raised goat were tender and pleasantly bitter from a toasted-guajillo sauce. I happily ignored dining etiquette rules when I licked my fingers of the juices from a smoky, mascarpone-stuffed jalapeño. On another occasion, the chickpea croquettes were so creamy I caught myself studying them to figure out how I could attempt them at home. During a bar visit, I couldn’t stop eating a side of cilantro rice and black beans, which had the perfect bite. One night, tender shreds of cochinita pibil had enough sour orange zing to conjure up memories of the time I forced my childhood friend to get off the Cancún tourist track and brave a locals-only dining room. And Oh. My. God. Rodriguez’s braised greens were absurdly good. They had enough grated Parmesan cheese and cream to counter the gentle bitterness of red and green chard, but not so much that it masked the pungency I craved in between gorgeously fatty bites of meat. (Ordering the storied Massive Attack salad after your protein fills the hankering for bright, crisp flavors. Drinking anything bracing from the restaurant’s well-curated beer list works, too.)

If I weren’t paid to record all of these dining details, I would have been having even more fun—too much to notice Work & Class’ more negligible shortcomings. During a bar stop with a visiting friend, pork and veal meatballs (a family recipe) were flavorful but dense, demanding the breadcrumbs with which they were made before they became gluten-free. An otherwise lovingly prepared piece of cornmeal-fried catfish and a side of cheesy polenta were both in dire need of a few pinches of salt. The stout reduction that pooled around my husband’s braised short ribs was a bit tinny from the metal pie plate. A drumstick socket didn’t separate from the body of a buffalo-style chicken as easily as it should have. My companion’s lime and blueberry pie tasted mostly of burnt cooking oil. If I hadn’t visited multiple times, I might not have known that Rodriguez’s childhood tortillas were one server’s gratis suggestion but another server’s sneaky up-charge. And you can be sure I wouldn’t have realized that the category of nonalcoholic beverages goes entirely unmentioned on the menu. 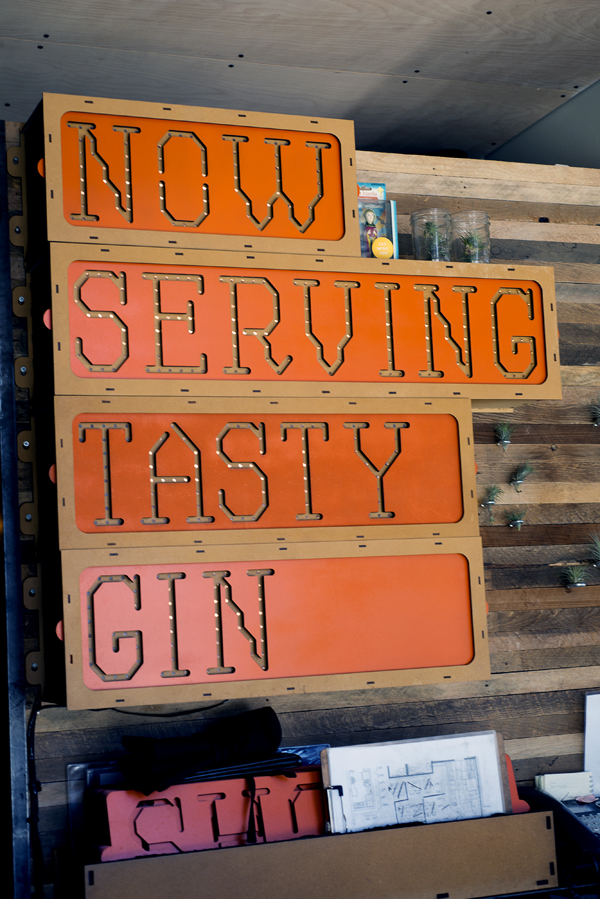 On my last visit to Work & Class, I sat at the chef’s counter and watched the kitchen, shaking my head in disbelief. The cooks fire up to six turns a night. One managed to fit  half a dozen ears of Mexican corn, a smoking chicken, a large order of the twice-baked red bliss potatoes, and a starter of blue-corn empanadas under the heat lamp in a matter of seconds. Another was garnishing a to-go order while the giant bowl he’d just used to season those empanadas was still rocking into place atop a teetering stack of Sysco plastic-wrap boxes. This is a consistently slammed restaurant where nabbing a bar stool is a contact sport. It’s the kind of place where people wait an hour at a nearby watering hole for an open table. It’s a spot where the people one seat over are planning their next visit before they’ve even paid for this one.

I guess there is one thing I’d change at Work & Class: I’d have another orange word printed for that light-up hostess stand sign. It should read “Now Serving Good Fun.” One night as we settled our bill, Maciag stopped by our table. I was anonymous and poker-faced about our meal, as I always am when working. “Thanks for putting up with the chaos of this place,” he said intuitively. “That’s part of who we are.” Indeed, it’s a bit of a circus at Work & Class, but it’s a happy, delicious, and entirely recommendable one.