At first, Ruth Hiller’s hopes for a Winter Park home were modest: a place to crash on the weekends to help feed her serious ski addiction, a 60-days-on-the-slopes habit that was becoming an exhausting schlep from her house in Boulder. The visual artist, who splits her time between Colorado and New York, found a tiny, affordable midcentury home in a residential neighborhood and scooped it up in 2000. “It was like a 1960s—I’m not going to say ‘ranch’—a 1960s square box,” Hiller says with a laugh. “When I bought the house, I thought I could redo it and just live in it.” 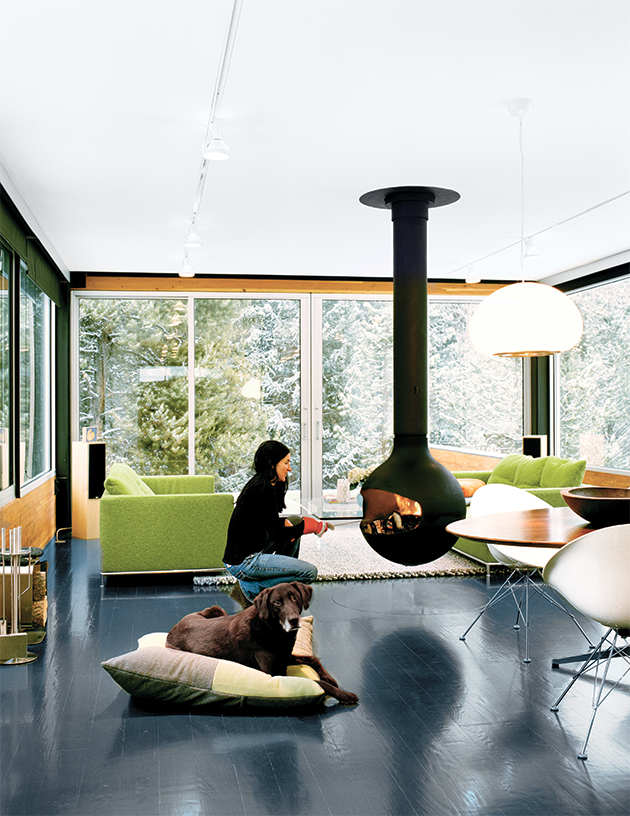 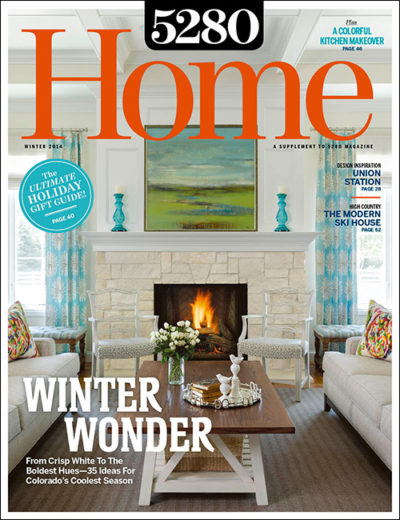 Living Room: Homeowner Ruth Hiller tends the fireplace—which can rotate 360 degrees, depending on where guests are sitting—as her late chocolate Labrador, Emma, supervises. Bright green B&B Italia couches provide a warm contrast to the home’s contemporary style, while the floor-to-ceiling windows welcome in the trees and snow. —Photo Bjorn Wallander/OTTO

A few years in, though, she realized that the home’s potential was limited, and she called in Michael P. Johnson, a minimalist architect who had designed a friend’s home on Shelter Island, off Long Island. Johnson had been designing contemporary homes across the country for decades and was a professor at the Frank Lloyd Wright School of Architecture at Taliesin West in Arizona for 25 years. “I went up and looked at the house, and it was terrible,” Johnson says. “I suggested to her that she should give the house away and keep the basement.”

Back at his office in Arizona, Johnson began sketching a new home for Hiller. “You kind of psychoanalyze your client,” Johnson says. “I think there are two types of people: perchers, who want to be in the air, and hollowers, who want to hollow down into the earth.” Johnson pegged Hiller, accurately, as a percher. He tucked three bedrooms (plus Hiller’s art studio) on the first floor and in the basement. Upstairs, he placed the kitchen, dining room, and living room into a broad, open space surrounded by big windows. Outside, a deck extends over an embankment that leads to a creek and right into the aspen trees. Hiller signed off on the design right away. 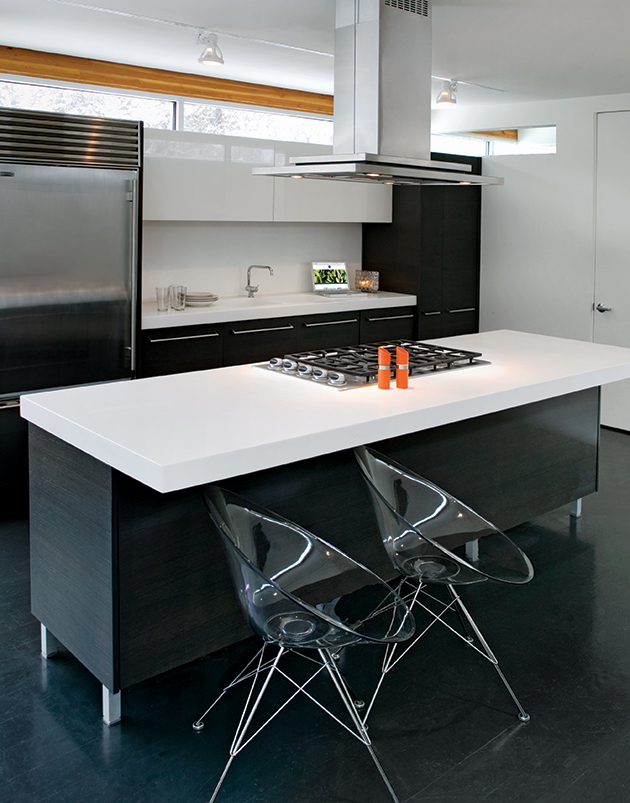 Although the plans came together quickly, building the actual home was an exercise in patience for both Johnson and Hiller. Winter Park’s planning and zoning board, accustomed to rustic ski lodges, was perplexed by the modern, minimalist design and at one point asked for some log accents on the home. Johnson refused and convinced the board to let him proceed. “They just didn’t like it,” Hiller says. The home’s construction took three years, stymied by unreliable contractors who were more interested in skiing than working, say Johnson and Hiller.

In 2006, Hiller was finally able to move in. Johnson, a perfectionist who generally demands control over his homes’ interior design—down to the furniture and fixtures—trusted Hiller to decorate it. “She is a fine-art painter, and it’s always a plus to have somebody who knows a little about design, proportion, scale, and color,” he says. “She has good taste in furnishing, so I knew she wasn’t going to muck it up.” 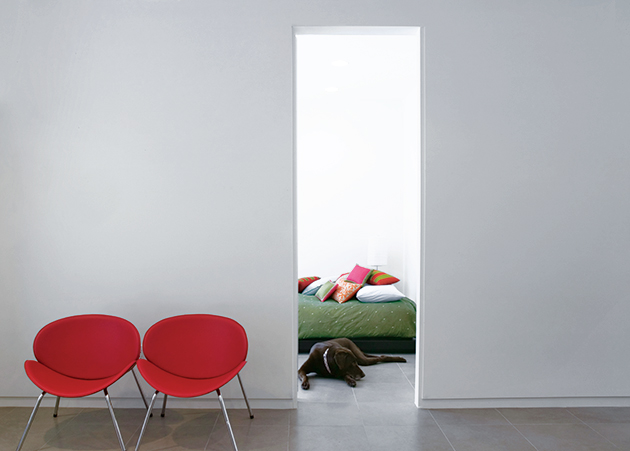 “She is a fine-art painter, and it’s always a plus to have somebody who knows about design, proportion, scale, and color.” —Photo: Bill Timmerman

Hiller kept a simple, classic palette, pairing dark hardwood on the second floor with a vintage, nine-foot Florence Knoll rosewood conference table in the dining room and a dramatic suspended fireplace from Focus, a French company. The rest of the house features gray, ceramic tile floors with radiant heating; in the bedrooms, guests can crash on platform beds from West Elm. Hiller also accented the living spaces with bright furniture, like the green sofas from B&B Italia in the living room and red chairs she picked up from Target for $9 each. That high-low combination, and the home’s general coziness, has won over her frequent guests, many of whom initially doubted that such a contemporary look could work in the mountains. “People often say, ‘I generally don’t like minimalist houses, but this house is very warm,’?” Hiller says.

Master Bedroom: Hiller wakes up to sunshine pouring through the massive windows in her ground-floor master bedroom. And though the gray, ceramic tile floors look cold, radiant heating makes for warm feet even on the chilliest mountain nights. Bath The home’s ultramodern feel is on display in the master bath, thanks to the sleek tub and sinks from Wetstyle. “I love that tub,” Hiller says. “I love taking baths in the winter.” —Photos: Bill Timmerman

Winter and summer may be the most popular seasons for her guests, but Hiller says the springtime is also beautiful. “The living space is on the second floor, and it feels like you’re sitting in a treehouse,” she says. “When the creek melts, you get the sound of the water through the trees—it’s just beautiful up there.” 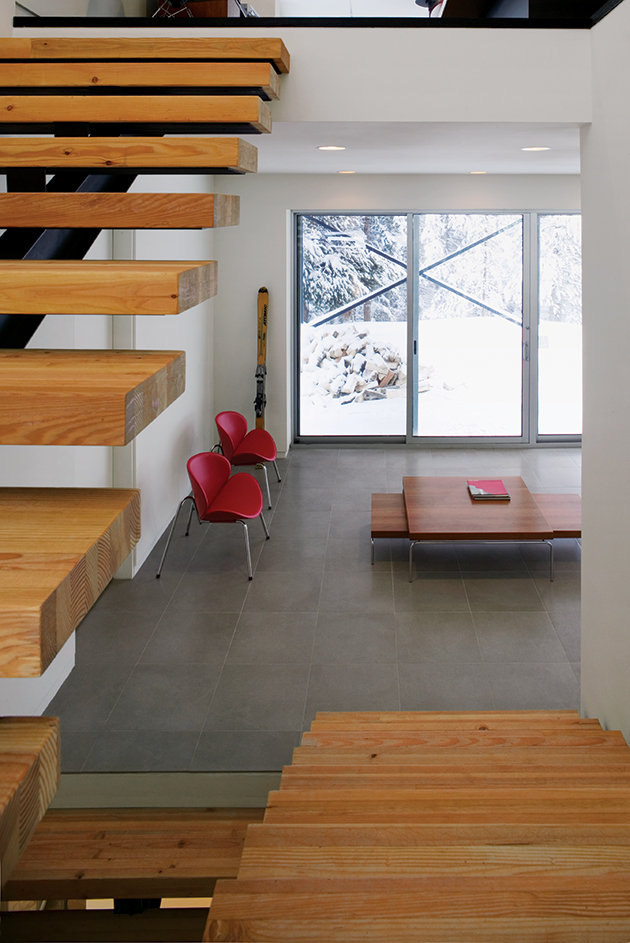 Den The downstairs den is an impromptu gathering space for guests (plus a much-needed gear-drop zone). Sliding glass doors offer access to Hiller’s tree-filled mountain property. Exterior When he saw the site, architect Michael P. Johnson immediately wanted to bring the sense of nature into the home—and vice versa. “I decided to put a box on top of a box and rotate it,” he says of the design, “and get you up in those trees.” —Photos: Bill Timmerman