During my first visit to Gozo, the Spanish-Italian restaurant in Baker, the sprawling 12-top—which moonlights as a communal table—was full. One woman in the party wore a stunning black leather jacket and shoes with metallic, runway-chunky heels. Another handled a fussy infant with the kind of grace that would embarrass restaurateurs who’ve recently outlawed children. I was spellbound by the bowed, golden eyelashes of a third gal in their group, wondering aloud if she was championing some nascent trend. I was convinced that my husband and I had just discovered the most fashionable restaurant in town.

The open, whitewashed, Dean & Deluca–esque design we’ve seen re-created ad nauseam was a blank canvas for this (literally) well-heeled group. Gozo owners Frank Jolley IV and Dominic Valenti accessorized the otherwise stark space with a few subtle but well-chosen design details when gutting—and combining—the dining rooms that once housed Deluxe and Delite. The white subway tiles in Gozo’s bathrooms are beveled. The simple, ostrich-egg-shaped maize pendant hanging above the hostess stand makes a sophisticated statement. A painting of a black-haired beauty resembles some kind of urban, modern-day “Mona Lisa.” Even Gozo’s staff gets in on the design game. Servers—one of whom had an impressive dreadlocked mohawk—wear dark tees, tailored jeans, pinstriped aprons, and high-fashion sneakers. One employee donned a fitted, black-and-blue color-blocked dress that was so striking she probably wondered if I was going to ask for her number.

Jolley has the resumé of an industry giant. He moved to Denver from Napa Valley and has worked with Gray Kunz, Michael Chiarello, and Michel Richard. During our phone interview, he reminisced about working events with chef greats Alain Ducasse and Jean-Louis Palladin. Yet, he wants Gozo to be a reliable neighborhood restaurant, the kind of place where the provenance of your carrots is not presented when dishes are served but where petite Italian cookies are delivered with your bill. But a first-timer’s pre-arrival assumption might be that Gozo is the kind of privileged spot that comes with a velvet rope. Early on, neither the one-page website nor the restaurant’s Facebook page included a menu or prices. On several occasions, the hostess failed to answer the phone: when I couldn’t find the restaurant, when we called to tweak our reservations, and when a companion had a parking question. It’s like a scavenger hunt—there is not even a sign bearing the restaurant’s name to indicate that you’ve arrived. On one evening, I got there one hour before the Facebook page said the eatery closed, but the staff must have had better places to be. Courses arrived one on top of the other, TVs were turned off, and bottles of booze were sealed as the staff rushed me through my meal. 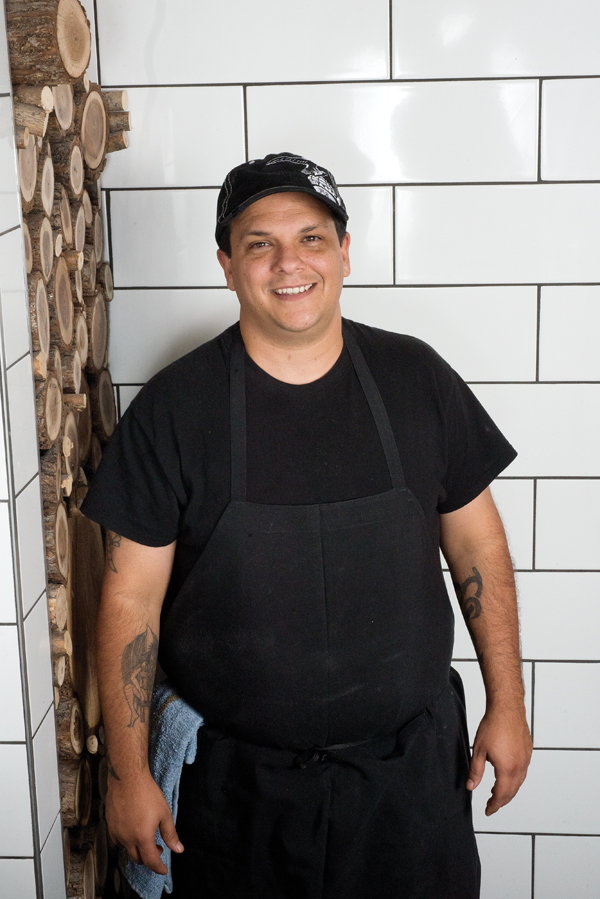 As I studied the bar between hurried bites that night, I discovered that Jolley is a music lover. Speakers he built from vintage suitcases adorn the space. He cleverly uses record covers from Eartha Kitt and Smokey Robinson to mark the women’s and men’s rooms, respectively. I later learned he designs the restaurant’s playlists himself. Yet attention to detail is so lacking at his restaurant that the music itself was never loud enough for me to recognize what was playing.

Even Gozo’s wine program was a mixed experience. Inspired by Jolley’s years of living among the vines, the list is pleasantly focused—a celebration of California, Italy, and Spain, including lesser-known varietals such as Falanghina, Trepat, and Ruche. Sparkling wine arrives in a regular wine glass, instead of a flute, to allow for better appreciation of the wine’s aromatics. But Gozo’s dining room is so hot (one night it registered 91 degrees on my mountaineering watch) that every glass of red I received was too warm to truly enjoy. On another day, a woman seated near me at lunch asked for ice in her glass of white. And I was surprised when servers couldn’t do more than talk about a wine’s acidity or fruit. In the dining room of a man who seemingly knows every vintner along Napa’s Highway 29, I yearned for little anecdotes about a winemaker’s modern expression of ancient grapes, a microclimate’s unusual winds, or a season’s limited production.

Wine wasn’t the only topic in which servers left my companions and me wanting more. On the surface, waiters were proficient. One helpfully described strozzapreti as being like two spaghetti noodles lined up side by side. They wiped tables between courses. During a meal when my date and I ordered a miscellany of things to taste, the server came back to our table to be sure the order in which they would come from the kitchen worked for us. But anytime my friends asked questions that veered from a staff member’s initially impressive shtick, we were given misinformation. On one visit I was erroneously told that Gozo’s pasta is custom-made for the restaurant. Another server said the restaurant bakes its own bread. (It comes from Grateful Bread Company.) One haughty waiter told us that an entirely delicious porchetta entrée was cooked in “Marsalis” wine. Never mind the mispronunciation, the accompanying figs were cooked in sherry.

Across several visits, the food at Gozo revealed the same inconsistency that I came to realize colors the entire experience. The menu was composed by consulting chef Nick Petrilli, who was replaced by chef Chris Falcone four months in. During a three-month stint dining there, I tasted as many forgettable selections as noteworthy ones. 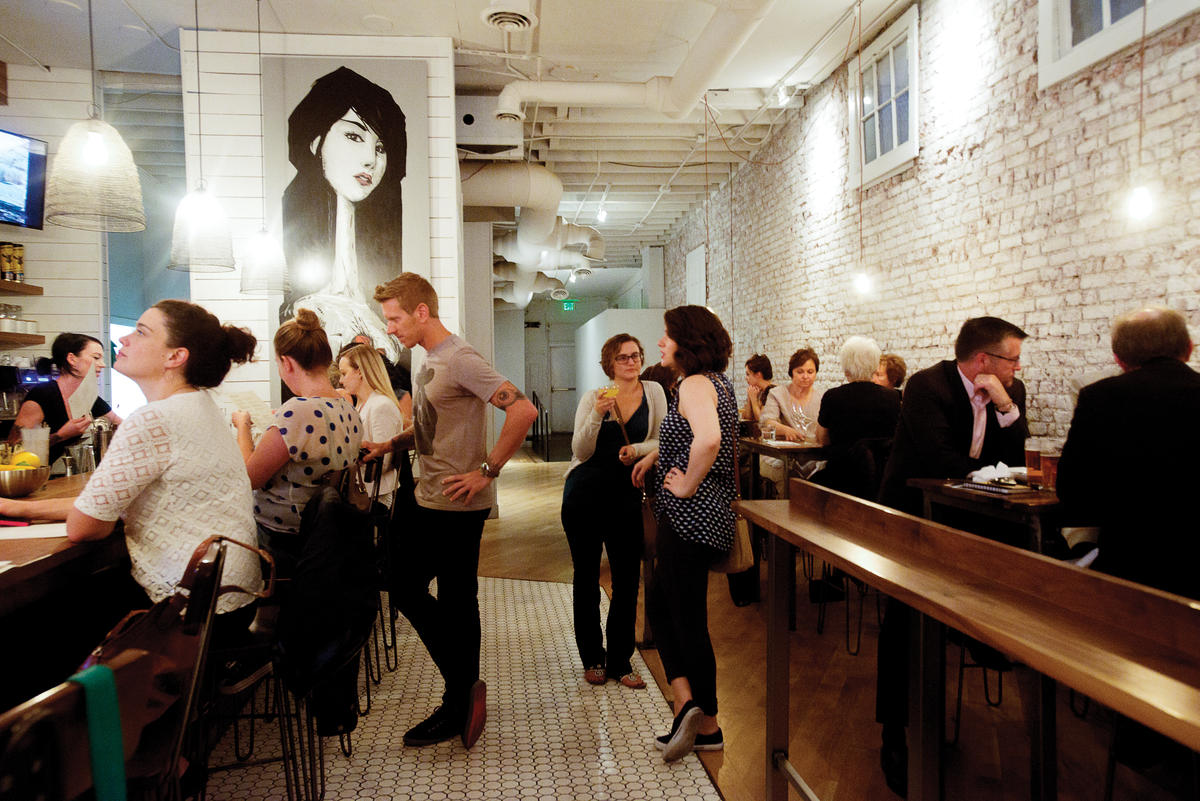 I still think about the boquerónes: thick-cut, toasted ciabatta drizzled with a generous amount of olive oil and topped with whole anchovies, heaps of fresh parsley, and impressively creamy-yolked, low-boiled eggs. I was taken with an unadulterated roasted cauliflower and lentil salad, dressed simply with a prominent dose of brown butter and good sherry vinegar. That porchetta entrée, big enough to share, was as flavorful as our waiter promised: The roll of Colorado pork (ground, shoulder, and brined belly) was roasted for 12 hours and served with slow-cooked figs and heirloom polenta so velvety that it might have stolen the show, had I not known the labor that goes into crafting porchetta. Huge short ribs were gorgeously smoky and tender.

At the same time, while a dish of wood-oven-fired Manila clams with chorizo and garbanzo beans was well-conceived, a handful of bites included sand or broken shell, and the beans were tacky. Our pork meatballs were especially tender—and then we saw it was because they were egregiously undercooked. Two fillets of roasted Colorado bass had textbook crispy skin but were set atop a mélange of off-season vegetables that included seemingly pre-frozen green beans. The menu warned that the spinach adorning a Manila clam and pecorino pizza would arrive “burnt,” but both the crust and greens were charred to black. An appetizer of soggy-bottomed suppli alla Romana (a cross between arancine and mozzarella sticks), that strozzapreti with bright, wilted spinach and diced bits of house-cured lemon, and those meatballs with polenta were all undersalted. I was surprised asparagus, spinach, English peas, and other “spring vegetables” dominated the menu that same 91-degree, late-summer night. 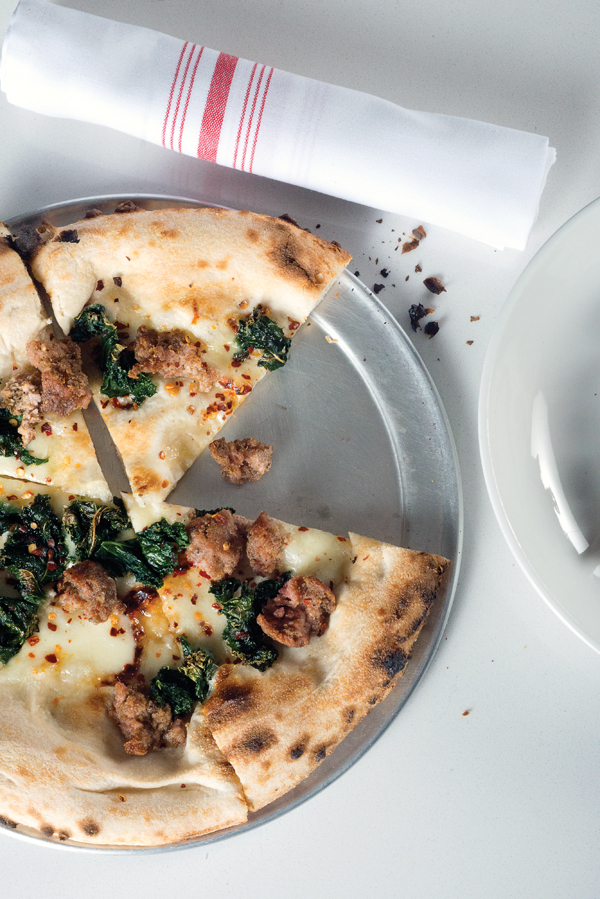 I understand that some restaurants-of-the-moment only serve a single dessert to make, in Jolley’s words, “a bit of a statement.” But with Sweet Action—one of Colorado’s very best ice cream shops—just up the street, it’s odd to me that Gozo offers a variety of gelato flavors. It’s equally puzzling that Jolley would open a concept centered around a wood-fired oven with a pizza-dedicated section on the menu when pizza (and even a nationally lauded oven) is the one thing this stretch of South Broadway doesn’t need.

In looking back on all of my visits, I realized that Gozo sent mixed signals all along, even during that glittery, golden-heeled first dinner. Style might trump substance in the kind of torrid love affair I think that modern Mona is in the middle of—and, in this case, might help gloss over the shortcomings of a singular meal. But these are not the trappings of a long-term relationship nor a sustainable business model. I hope (if only for the residents of Baker and West Wash Park, who deserve the solid neighborhood go-to that Gozo, at its best, can be) the restaurant quickly settles into a more mature and stable routine. Gozo’s whitewashed space isn’t just a blank canvas for customers. It could become a useful tool for Jolley and his team as well.