Thirty years ago, the life expectancy for those living with Down syndrome was 25. Today, for the approximately 400,000 Americans with the genetic condition, it’s 60. That’s due in part to medical advances, such as longer-lasting fixes for congenital heart defects, as well as cultural shifts in perspective—many of which were pioneered at Chicago’s Adult Down Syndrome Center at Lutheran General Hospital. And now the man who helped found that center, Dr. Dennis McGuire, is bringing his experience to the nonprofit Denver Adult Down Syndrome Clinic in Aurora. Since McGuire arrived last year, the clinic has doubled its patient load. McGuire sat down with us to discuss how perceptions and medicine have changed for the better—and what work still needs to be done. denverdsclinic.org 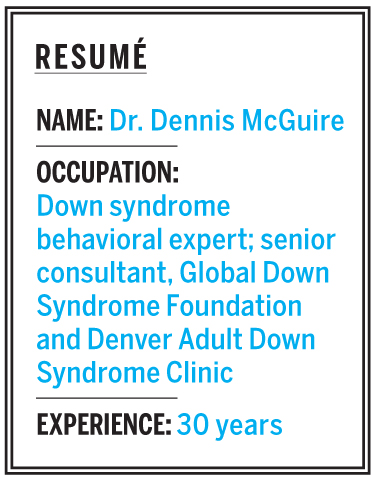 The public conversation about Down syndrome often used to center on children. Why were adults overlooked?

About 30 to 40 years ago, there was a shift: Families stopped sending their kids to live in residential settings. They kept them at home. That turned everything around. There’s also more interest in teens and adults because there are certain health issues associated with folks who have Down syndrome—including very low incidence of hypertension and cancer—that make them of great interest to researchers.

What are some of the medical issues people with Down syndrome face as they age?

There is a high incidence of hyperthyroid problems—about 40 percent—which is huge compared to the general population. They have a lot of sleep apnea issues and celiac disease. Part of the reason we were successful as a medical clinic in Chicago is because we combined my mental health and behavioral focus with traditional medicine, so we were able to tease out some of the issues. A lot of times, if there’s a health issue, it shows up as a change in behavior.

Can you give an example?

We find that one of the reasons people have problems is simply because they’re not sleeping very well. Once [my colleague Dr. Barry Martin and I] identify it, I can help the families set up simple incentive systems based on what we’ve learned is important to our patients. People with Down syndrome don’t understand time very well—five minutes or five years is a little too abstract. But they have this phenomenal visual memory, and they love calendars because they can see and memorize and they like predicting what’s coming next. So every time people wear their sleep apnea–treating masks, there’s a big plus on the calendar, and they earn something small, like a bit of money they can use to go to a movie.

What’s your goal for the Denver clinic?

For a long time, Chicago had the only clinic like this in the world. As good as that sounds, it’s not ideal. The Global Down Syndrome Foundation [a partner of the local clinic] wants to teach other groups around the country how to do this. My job is to set the Denver clinic up with the best possible programs and services and then encourage other clinics around the country to do the same.

Why is it important to have a Down syndrome–specific clinic?

There are enough unique issues and concerns for people with Down syndrome. We found also that it’s not easy for folks to communicate. So a lot of times, in a clinic where they don’t have enough experience, physicians may not look for things we would look for or pick up on. We find families come in here and feel right at home immediately. They say, “For the first time, we got somebody who understands my son or daughter.”

5280.com Exclusive: More from our Q&A with Dr. Dennis McGuire.

What are some common misconceptions about adults with Down syndrome we can lay to rest?

There are some stereotypes of folks with Down syndrome being kind of stubborn. They have their own routines and sense of order and if you respect that, they come through for you. You have to give them time to finish what they’re doing, and then they are more than happy to move on to the next task.

Are families involved in the clinic’s work?

They’re our best audience. Families can best advocate for their loved ones. They’re the ones who live this, so we have to listen very carefully to what their concerns and experiences are. We now have a task force of professionals, families, and a number of individuals with Down syndrome to get input on best practices to meet people’s needs. They want to make sure we develop the best possible clinic for people with Down syndrome.

Are more people with Down syndrome living independently nowadays?

It’s a mix. There are some folks who live in their own apartments who have minimal need for help; other folks have stayed with their families. But much more have moved into small living situations where people are allowed to be independent and proud of their own skills and abilities and resources. People are much more capable, often, than they’re given credit for, so the key is to let them try.

So what’s next for you?

I want to pass on what I’ve learned to other folks who can work with families and individuals with Down syndrome. It’s my mission. I have to do that. They’re beautiful people, and they deserve this.