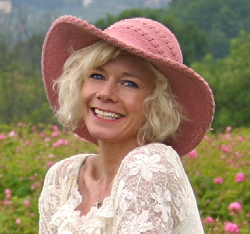 Don’t forget to check out the previous installments in our five-part series on Winter. Part one offers a glimpse into the ballet’s soundtrack, and part two looks at the show’s costumes.

“Aroma” isn’t usually a word you want to think about when attending a dance performance. Oh, sweat, what a lovely smell—said no one, ever. But the team at Wonderbound has something a little different—and much more palatable—in mind when it comes to invoking the sense of smell in their upcoming production, Winter. They asked local perfumer Michelle Roark (pictured, right), founder of Phia, to formulate five scents to be distributed to the audience on cards (they will be cued to sniff a specific card at designated times throughout the performance). “The whole idea is to connect with people on an emotional level,” Roark says. “And the best way to do that is through their sense of smell.”

For example, in scene three, the main characters—a husband and wife—fall asleep; as they dream, the magpie (remember her?) enters the room and steals the woman away. Roark distilled the feelings of this scene into what she’s calls the Midnight scent. It was designed “to take people on a journey,” she says. Here, Roark dissects the main essential oils that combined make this lovely, woodsy aroma:

Jasmine is the flower of the night. It’s also an aphrodisiac and is associated with adventure.

Tuberose is very intoxicating and sensual. It’s strong and mysterious.

Sweet grapes and berries are reminiscent of forests, and this scene is outdoors. “We wanted a little sweetness,” she says.

Clove is a spice known to invoke the imagination. It’s also of-the-season, and sets the mood for winter and Christmastime.

Cedarwood and sandalwood are outdoorsy and woodsy—they invoke grounding, bringing your feet to the earth. They both open the mind to creative thought.

Vanilla is soothing and invokes a sense of winter.

Next up: Step into the kitchens of four chefs who are creating bite-size appetizers and desserts to accompany the performances.