When I moved to denver eight years ago, a seven-ounce, 28-day-aged Manhattan cut New York strip was my first stop after turning in my U-Haul. Of course, the Mile High City’s food scene has matured a great deal in the years since that meal, and Denver has graduated from its “cow town” status. If I had a do-over today, my inaugural dinner would more likely include a pile of house-smoked, pickled, and fermented vegetables; FedEx-ed octopus; and a cocktail made from a Colorado-distilled spirit. And yet, “What is your favorite steak house?” remains one of the most common dining questions I’m asked. My answer: Guard and Grace.

Named for chef-turned-restaurateur Troy Guard and his daughter, Guard and Grace is located in Denver’s central business district. It’s easy to get to but breathes new life into a relatively underserved epicurean desert. And although this 11-month-old steak house is not trying to emulate Manhattan’s Meatpacking District (thank goodness), it is a fresh departure from the traditional style. The bathroom tiles are inked with rock ’n’ roll band names in black Sharpie, and the restaurant has more modern light fixtures than some showrooms along Santa Fe. What I like most about Guard’s take on the steak house, however, is this: As a chef known for pushing boundaries, Guard has shown great restraint in a genre that requires it. He has given a fresh coat of paint to the dusty corners of the century-old steak-house model without ever straying too far from the most important tenets.

In keeping with countless spots that have opened since P.J. Clarke’s and Delmonico’s first created the steak-house mold in the 1800s, shrimp cocktail from Guard and Grace’s raw bar comes with chilled, enormous, yet still-sweet crustaceans. Although cooked on an oak-fired grill, not in a 1,800-degree broiler, filets, strips, and rib-eyes are sprinkled with the requisite top-secret blend of spices. And, while holding true to certain expectations of a steak-house wine menu (there is no shortage of California Cab), wine director Todd Rocchio’s 300-bottle list has a good dose of Old World depth. “I’m selling more Châteauneuf-du-Pape as a category than I am Silver Oak, Cakebread, and Phelps combined,” he says. 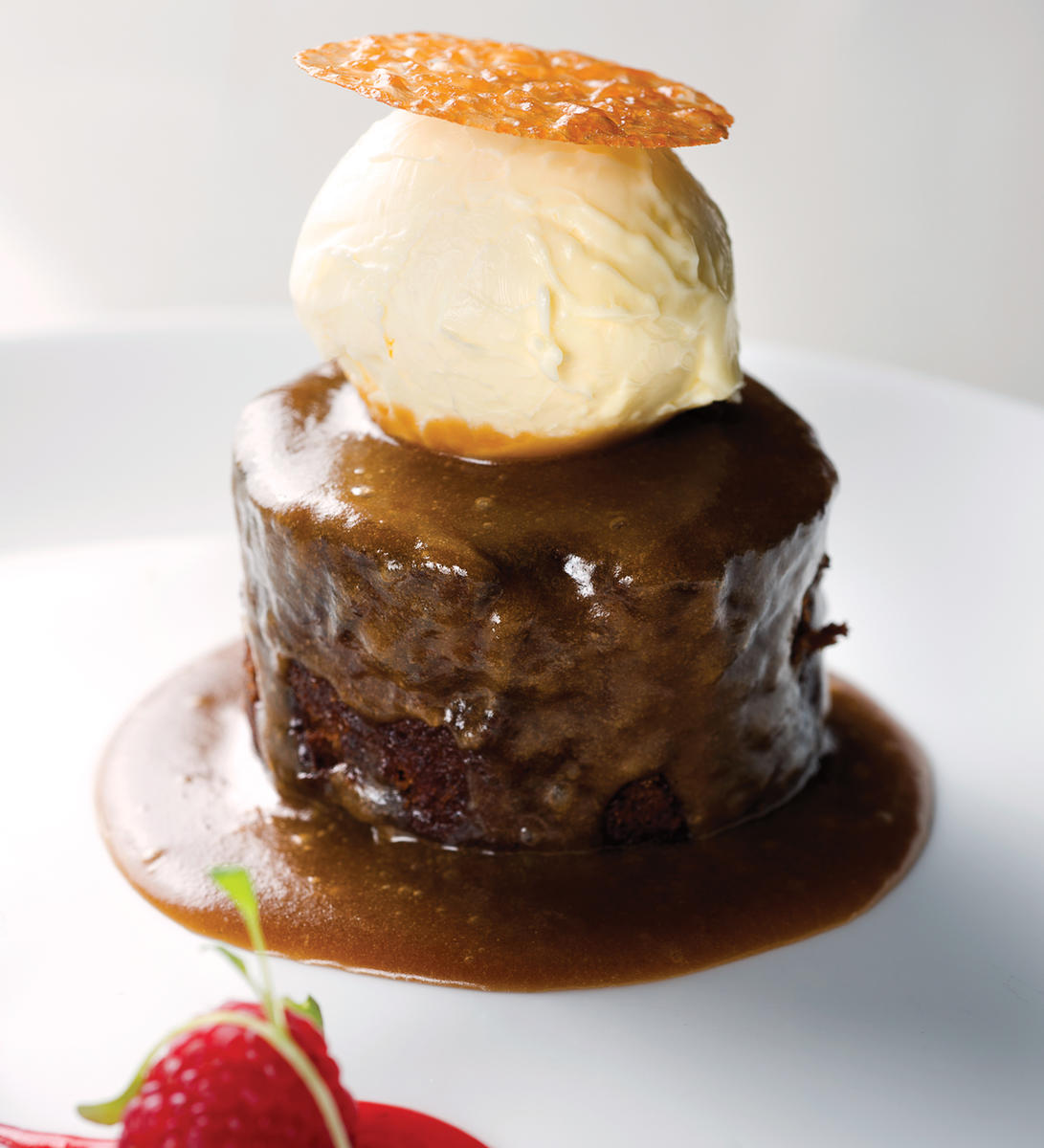 On one visit, I was dazzled by the chilled lobster appetizer. The compressed disc of claw and tail meat was embellished with translucent radish coins, nuggets of fennel-topped grapefruit, dots of kumquat marmalade, and matchsticks of fresh hearts of palm. A carrot dish made Guard’s list of starters far more progressive than the many steak-house menus that stop at crab cakes and an iceberg wedge (although Guard offers his takes on those as well). Here, multicolored carrots stood upright on the plate like a forest glade. All the components—a yogurt sauce, a tangle of green carrot tops, crumbled pistachios—were as flavorful as independent entities as they were mixed together. Such thoughtful use of vegetables carried over to executive chef Brian Murphy’s “sides” section. Au gratin potatoes came in brick-shaped pieces, resembling (and as addictive as) golden candy bars stacked on top of one another. Wild mushrooms arrived with a meaty bite and a judicious dose of sherry vinegar. A plate of in-vogue shishito peppers were finished with flakes of Maldon sea salt so opulent that when one landed on my lower lip, I let it sit and melt like a snowflake.

The star of the show—steak—was just as impressive. Chefs Guard and Murphy offer prime, Angus, and grass-fed beef in portions as small as four ounces and as large as 22. One night, a companion’s filet—flawlessly cooked to medium-rare—was the most subtle grass-fed beef I can remember tasting. The gentle marbling in a prime New York strip I ordered showcased the deep, smoky notes from Guard’s oak-fueled grill. And while I missed that Peter Luger–style char, every piece of beef I had at Guard and Grace was memorably tender. Sauces such as a tarragon hollandaise, a chimichurri, and a foie gras butter completed the obligatory steak-house lineup.

But the menu doesn’t stop there. One evening I had an entrée of four enormous seared Maine scallops that were set atop Moroccan couscous and a zigzag of chickpea purée and plated with a fistful of onion-parsley salad, Castelvetrano olives, and pickled Fresno chiles. It was a noteworthy merging of spicy, salty, and bright. During a lunchtime visit, I made a friend share her smoky sandwich of oak-grilled chicken, spicy chipotle aïoli, and crunchy cabbage-radicchio-kale slaw.

For dessert, pastry chef Ryan Walker offers steak-house classics such as a banana cream pie in portions as colossal as the business deals being celebrated. But it was his toffee cake, made with dates and served with burnt-sugar ice cream, that I liked best.

For the most part, service lived up to these back-of-the-house triumphs. Hosts standing in front of a living wall of dracaena and waffle plants unanimously greeted us with enthusiastic attention. One night, reading a paper ticket the hostess had printed for him, our server started by apologizing that we had to wait for our table…for all of four minutes.

When reviewing the menu, the waitstaff—much of which came from Elway’s, the Capital Grille, Del Frisco’s, Shanahan’s, Rioja, and Mizuna—was notably passionate about the menu. “It’s amazing how much smoky flavor a carrot will absorb,” one told us. And for all their zeal, more often than not they were equally informed. For example, one went into great detail about the butchering process for the Colorado bison tartare we were considering.

Just as impressive, staff members at Guard and Grace (some of whom took demotions in order to join this team) aim to please. “I don’t see why not,” I was told when I asked if it were possible to get a half-pour of rosé with lunch. This commitment to the guest experience will continue to serve Guard and Grace well. Although I admire this crew for bending the steak-house rules without ever breaking them, the restaurant is by no means perfect. During my first meal, which I later learned was during a time of change (Guard let his opening chef go two months in, and there was another two-month gap before Murphy started), diced potatoes that accompanied an otherwise glorious octopus dish were so undercooked they were crunchy. A fish sandwich at one lunch was disappointing—its potato bun broke into more and more pieces with every bite, and the french fries that accompanied it were pale and dense.

There were infrequent but revealing service missteps as well. The most curious example occurred while ordering a bottle of wine one night. We gave a sommelier our price range and explained that we wanted “a grape or a region or a producer that was new to us.” Her response? Stags’ Leap. What experienced wine drinker hasn’t heard of one of the oldest wineries in Napa? Our brows must have furrowed, as she quickly suggested a Priorat with the kind of passion one would expect in a restaurant with a bar built of wine corks. As she talked of black, arid soil and gnarly, stressed-out vines, I realized her initial gaffe was temporary, and she’d recovered admirably.

I learned in researching this review how many changes this 350-seat restaurant has already undergone in its short lifetime—most significantly, the opening chef’s departure. In the weeks that followed, Guard simplified some things, an underappreciated attribute. Specifically, he only recently began dry-aging beef himself, and he is still in the process of ramping up an in-house charcuterie program to its full capacity. Eventually, Guard wants to grow some produce as well, but he is prudently waiting until the restaurant is more mature.

During my last dinner at Guard and Grace, a waiter stopped at our table to inspect the scallop entrée I was savoring. He explained they’d just changed the presentation and he wanted to check it out. This hunger to constantly refine things, even the way a singular dish is plated, is laudable. Give Guard some time to perfect a few equally subtle details, and he might just win over an entire town of longtime steak lovers.